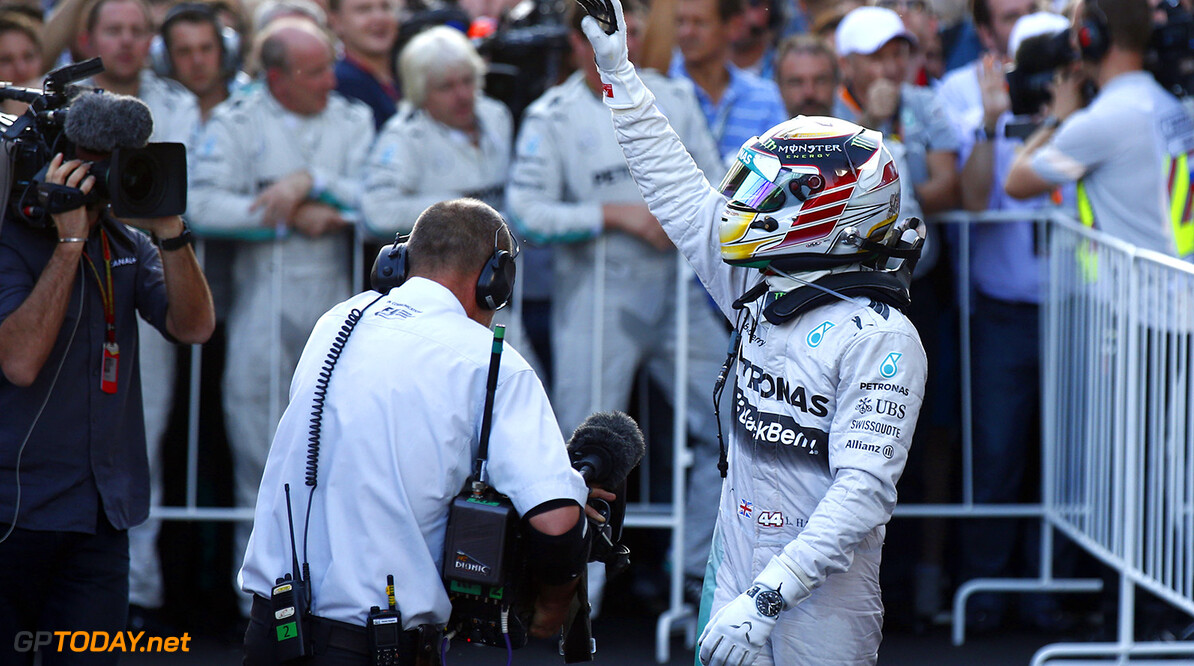 Lewis Hamilton: "Crossing the line on Sunday in Sochi was a really amazing moment. To win the very first Formula 1 Russian Grand Prix and help the team achieve the first Constructors' Championship for Mercedes-Benz with a one-two finish - it couldn't have got much better. When I went to the factories in Brackley and Brixworth the week afterwards, the atmosphere was just awesome. Everybody has worked so hard to achieve this title and they all deserve to savour the moment. Of course, we still have three races left to decide the Drivers' Championship - starting in Austin, which is one of the best weekends of the year. A lot of the American side of my family come to the race, plus I won the first ever Formula One Grand Prix at the circuit back in 2012, so it's a special one for me. I really enjoy going there and I'm looking forward to another great race - hopefully ending up with another Stetson hat on the top step of the podium!"

Nico Rosberg: "What a week we had after Russia. Being back at Brackley and Brixworth with a Constructors' Championship title for Mercedes-Benz - the first one ever, of course - and celebrating with all the people I've watched working flat-out, day and night for nearly five years to achieve this goal - it was just fantastic. I'm really proud to be a part of this team along with all the great people within it, so it's great to see them get such a reward for all their efforts. Now, of course, we target a big finish to the season in the final three races. It's still all to play for in the battle for the Drivers' Championship and I won't be giving up the fight until the flag drops in Abu Dhabi. Hopefully we can keep the entertainment going right to the end for the fans out there enjoying the contest. The first step comes in Austin, which is a really cool city and a great race track. I haven't had the best races there so far, but I'm determined to change that this year."

Toto Wolff, Head of Mercedes-Benz Motorsport: "We were immensely proud to have sealed the first ever Formula One World Constructors' Championship for Mercedes-Benz at the first ever Russian Grand Prix a fortnight ago. The atmosphere since has been fantastic - and rightly so after the years of hard work that everybody has put into this achievement. What is particularly impressive, however, is that among the celebrations there has remained a strong sense of grounding and focus. Not just for the remainder of this season - but for the years to come. Success in Formula One does not come easily and we are determined to ensure that our performance this year is not a one-off but the first of many. For now, though, our priority is to give both drivers the best possible platform for an unhindered fight to the flag in Abu Dhabi. The first step, of course, is Austin - a weekend the whole paddock looks forward to and an important event in terms of bringing Formula One to the United States. The U.S. is the biggest consumer market in the world and the largest global market for Mercedes-Benz; thanks to the race in Austin, we can see that the US is playing a bigger role in our sport, too, with greater interest and investment at many levels. F1 has a passionate fan-base in the USA, which we can see growing all the time: the crowds at the first two races in Austin were absolutely mega, which is very encouraging for the future."

Paddy Lowe, Executive Director (Technical): "It was fantastic to secure the Constructors' Championship at the very first Russian Grand Prix - and a great honour for me personally to be able to collect the race trophy on behalf of the team after such an amazing achievement. This is the result of many years of hard work from everybody involved at Brackley, Brixworth and Stuttgart and it was particularly satisfying to see the title clinched with a one-two finish. Lewis produced a flawless drive and Nico a fantastic recovery from the back of the pack, so it was a proud day all round. There have been plenty of celebrations at the factories, which is great to see. When you're so focused on competing in a World Championship battle it can be difficult to take a step back and appreciate what has been achieved. Of course, with three races still to go it's been straight back to business. The Drivers' Championship has yet to be settled and it is still all to play for with the standings so close. We have the prospect of a dramatic finale with the double-points race in Abu Dhabi and it is unlikely to be decided before that point. Our focus has been very much on providing the drivers with the equipment to compete on equal terms so that the best man may win. Looking first to Austin, it's only the third time we've been there as a sport and it's an event the whole team enjoys. It's an interesting city and we see fantastic support from the American fans. It's also a great racetrack - a good all-round circuit which is demanding of all aspects of the car. As we saw in Russia, a new - or relatively new - track surface can give unpredictable results in terms of tyre performance, so we'll be doing our best to prepare for all eventualities and produce another strong result."
F1 News Lewis Hamilton Nico Rosberg Mercedes
<< Previous article Next article >>
.