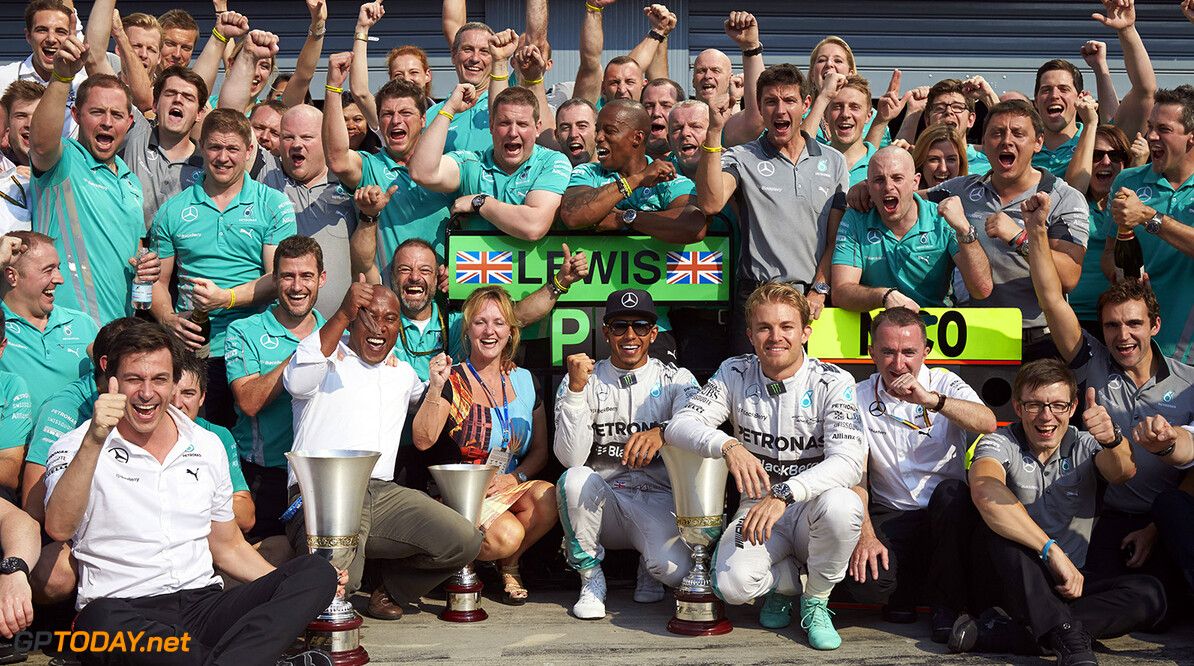 Lewis Hamilton: "It was a good feeling to finally get back on the top step at Monza - especially after another tough start to the race. The car was just flying out there after those difficult first few laps and it was great to be able to capitalise on the pace I felt I'd had right from the beginning of the weekend. Obviously, with Nico coming second I haven't been able to close the gap too much - but there's still plenty of points to be won and I'm glad to have taken a step forwards. Despite the highs and lows, I'm still well and truly in the hunt for the Championship and that is something that gives me huge motivation for the final six races - starting in Singapore. It's a great place to begin the final flyaway phase of the season. The city is buzzing and the track is mega. It's a street circuit and I love street circuits. I won there in 2009 which was a really special experience, plus I had a podium - which should really have been a win - at the first race in 2008. My luck hasn't been great at this circuit since then but hopefully that will change next weekend."

Nico Rosberg: "Even though it didn't work out quite the way I'd hoped, there were still plenty of positives to take away from Monza. Once again our Silver Arrow looked super quick compared to our rivals and hopefully we can carry that right through to the end of the season. Of course, I was disappointed to drop points to my team-mate in the Championship battle - but I still have the lead and I'm determined to hold on to it. Next up it's the Singapore Grand Prix, which is definitely one of the highlights of the year. There's an amazing atmosphere and the whole city really comes to life for the race weekend. It's just unreal - I would really recommend anybody to go there if they can as it's a fantastic experience. The circuit, the city, the atmosphere... everything! The way they basically shut down a whole place just for Formula One is incredible and it's amazing to think of all the work that must go into making it happen. I got my second ever podium here with P2 in 2008 and I generally enjoy street circuits, so I'm looking to go one better this time around."

Toto Wolff, Head of Mercedes-Benz Motorsport: "Italy was a fantastic way to wrap up the European phase of the season after a tough few weekends at the preceding races. It was our first one-two finish since Austria and, realistically, the results in between had not matched the high standards we set ourselves as a team. To see both drivers on the top two steps was a thoroughly deserved reward for all the hard work put in by the people at Brackley, Brixworth and Stuttgart. Lewis produced a fantastic drive to recover from a difficult start and take a well-earned win. For Nico, it was unusual to see a few mistakes when he is usually so consistent - but he has all the mental strength required to bounce back. Away from the racing, it's been a busy week for both the team and for Formula One. On track, it has been confirmed that we will now see less radio traffic. This is a complex and controversial decision which will require a significant effort from the teams to understand how best we can work around it. The directive is not yet fully clear and there will inevitably be some controversy, so it will need further clarification as to how much the essential on-track procedures will be affected - particularly before the start of the race. Also, in the wider world of the sport, we have seen Luca di Montezemolo stand down from his position at Ferrari. Mr di Montezemolo has been an iconic figure in Formula One for many, many years and I personally wish him all the very best. Looking ahead, we now approach the final six races of the season - beginning with the spectacular Singapore Grand Prix. This is an event which the entire paddock looks forward to each year, and we fully intend to kick off the final third of the season with another top result."

Paddy Lowe, Executive Director (Technical): "As a team we were incredibly happy with the result in Monza. It's one of the great circuits of the season and a challenging one to take a win, let alone achieve a one-two finish, so that was extremely satisfying. They were fantastic drives from both Lewis and Nico and it was a welcome return to winning ways. Singapore is a race that I'm sure the whole paddock looks forward to. It's a glamorous event with a fantastic atmosphere - to the extent that standing on the starting grid under the thousands of spotlights feels much like being on stage, waiting for the theatre to begin. It really is a unique weekend - not least because of the peculiar timings. The circuit itself could not stand as more of a contrast to Monza, with a lot of low-speed corner content. The demands on the car are still very high in terms of braking, steering and also the engine. It's also a long race - often running to the full two hour limit and frequently characterised by safety cars. It's a tricky one to manage no matter what position you might be in, with fortune playing a part depending on the nature and timing of any issues which may arise. It's always an action-packed, incident-filled race, with the nature of the track and the heat playing a role in retirements - both mechanical and by human error. We'll be aiming to steer clear of any drama and come away with another strong result as the season enters its final third."
F1 News Lewis Hamilton Nico Rosberg Ferrari Mercedes
.