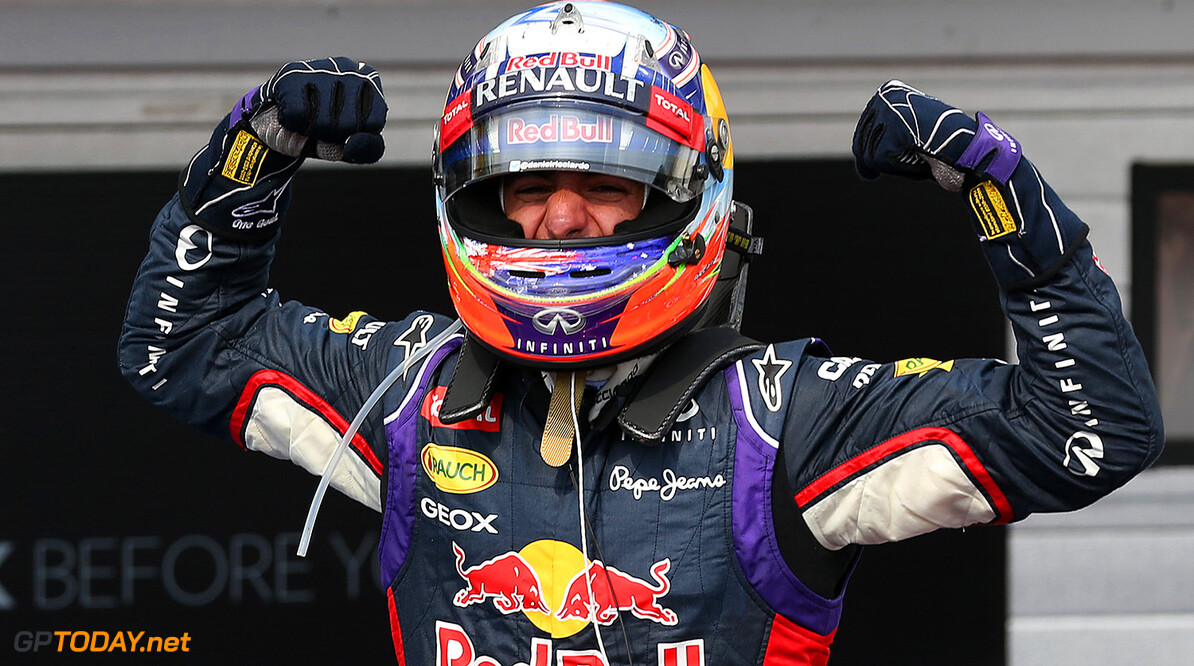 Ricciardo declares himself in the hunt for the title now

Daniel Ricciardo has declared himself in the hunt for the 2014 world championship. Before the title war between Mercedes teammates Lewis Hamilton and Nico Rosberg exploded in Belgium, no one would have bet against a dominant victory for one or the other of the silver-clad duo.

But as their personal battle spilled into on-track carnage at Spa-Francorchamps, Red Bull's surprise newcomer Ricciardo grinned through the melee to secure his second consecutive race victory. It was the Australian's third win of the season and his career, and a look at the drivers' standings shows he is now only 35 points behind Hamilton for second. "The fact that Daniel only has one win less than Nico is really remarkable," said team boss Christian Horner.

Closing down the 64 point gap to championship leader Rosberg is more unlikely, but it cannot be forgotten that the winner of November's Abu Dhabi finale will secure no fewer than 50 points. It is enough of a concern for Mercedes that, after Sunday's clash, the dominant Brackley based team is rethinking its policy on standing team orders.

As was expected, Mercedes' engine advantage shone through on the long stretches at Spa-Francorchamps, but Red Bull's Renault-powered car also looked quick in a straight line on Sunday. "I guess on TV you could see that the rear wing was pretty simple, there wasn't much to it," said Ricciardo, "but obviously it was a good package here and we'll see if the Monza wing can get any smaller! Monza we know will be tricky again but obviously the package we brought here was pretty racy, and then I think Singapore and Suzuka will be pretty good for us," he added.

Ricciardo acknowledged that winning the championship is a long shot, but he insisted he will keep pushing anyway. "If I'm within fifty (points) coming into Abu Dhabi then it's still mathematically possible -- we'll keep fighting."

The added bonus for Ricciardo is that he has achieved his success alongside none other than reigning quadruple world champion Sebastian Vettel, and his demeanour on Sunday indicated he is yet to feel the weight of the growing pressure. "I'm enjoying it more than ever," he said. "Each race that goes on I'm having more and more fun. The in-team battle has, let's say, gone really well. I think the team has been really pleased and I've been pleased so we're in a good place."

German television commentator and former driver Marc Surer echoes Ricciardo's claim that the title cannot be ruled out, but he also acknowledged that overcoming the might of Mercedes' dominance is unlikely. "That would be amazing," he said, "and I almost can't imagine it. Of course, if it carries on like this and looking at the (double) points situation for the final race, then it is possible. But I don't think so. There will be races again where Mercedes will clearly dominate, driving all alone at the front of the field," added Surer. (GMM)
F1 News Daniel Ricciardo Lewis Hamilton Nico Rosberg Sebastian Vettel Mercedes Renault
.