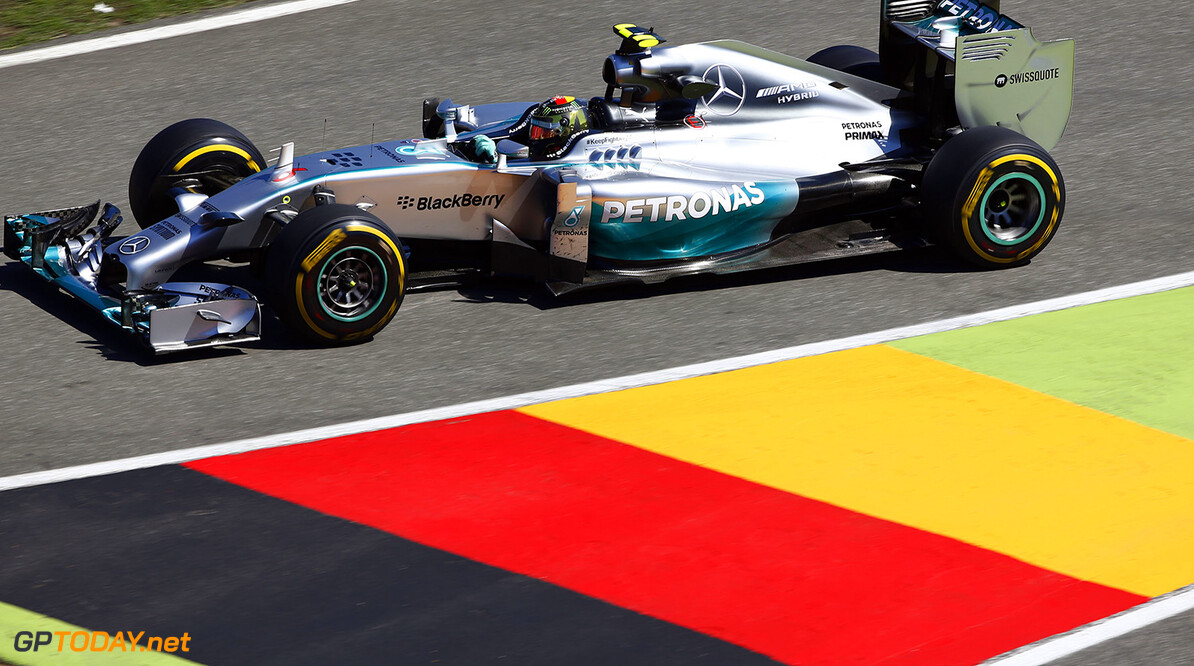 The clouds and grey skies were looming overhead with cool temperatures for the start of the race. Before it even began, it became an even more difficult race for Lewis Hamilton who was due to start 16th but thanks to a gearbox penalty he would start 20th. Gutierrez also incurred a penalty and would start way back in 16th.

With Rosberg starting on pole it was looking to be a positive race at the German's home race. Bottas started alongside him and was looking menacing with the cooler conditions allegedly falling in the Williams teams favour. Massa in 3rd and Magnussen in 4th could prove to be threats also.

The top eleven drivers started on the supersoft compound of tyre, as was the case with the majority of the field. Only Button in 11th was the main protagonist who started on the soft tyres who it was believed could challenge the likes of the front runners.

Off the start it was Rosberg who got the jump on the field who Bottas retaining 2nd, whilst Magnussen and Massa tried to get past the Finn through Turn 1, however there was not enough room for the two and they made contact which caused Massa to roll and Magnussen to spin. The Brazilian retired on the spot whilst Magnussen was able to continue.

The restart saw Rosberg leading, with Bottas in 2nd and Vettel in 3rd. Good starts came from Button who jumped from 11th to 6th whilst Hamilton was already in 16th and soon got past Maldonado's Lotus for 15th.

Rosberg was beginning to stretch his lead from Bottas whilst Hulkenberg and Button became embroiled in battle for 5th place with the two cars swapping positions, with the German ultimately holding off the threat for now. Meanwhile, Hamilton had improved up to 13th getting past Grosjean.

Hamilton's next target was Daniel Ricciardo in 12th who had also been caught up in the first lap incident, however the Australian was busy focusing on getting past Sutil into the hairpin which Hamilton also saw as an opportunity with the Sauber driver losing two places in one corner.

On Lap 9, Kvyat and Perez were battling for 5th with the Russian Toro Rosso driver trying a bold move around the outside of Turn 8, but there was no enough room for the two which caused Kvyat to spin and drop to the rear of the field.

By now Hamilton was up to 10th and still harrassing Ricciardo who was stuck behind Perez and Raikkonen. Ricciardo got past Raikkonen for 8th whilst Hamilton made an incredibly bold move into the stadium section, just avoiding contact but failing to get past the Finnish driver.

Lap 13 saw Ricciardo struggling with his tyres and Hamilton get the run on both Raikkonen and Ricciardo on the back straight, with Hamilton taking two positions at the hairpin despite a small lock-up and minor contact with Raikkonen. The Briton later made it past Perez a lap later, promoting him up to 5th.

The pit window was now open, Alonso made the first move and then a lap later Vettel did also. He rejoined with the two Ferraris locked into battle and the trio went three abreast into the hairpin with Raikkonen being squeezed between the two resulting in contact. Rosberg then pitted from the lead and resumed the race in the lead with Hamilton who was yet to pit close behind, Bottas was 3rd, Vettel 4th, Alonso 5th and Raikkonen 6th, who also hadn't stopped.

On Lap 19, drivers were beginning to report about minor spots of rain around the circuit but it was of a low intensity for the time being. Hamilton's tyres were beginning to wear heavily now and he was easy prey for Bottas with the Mercedes team trying to stretch the Briton's stint out for a potential one-stop strategy.

Ricciardo, who had pitted got past Magnussen for 9th whilst Hulkenberg overtook Raikkonen for 6th who later pitted for soft tyres. The two Lotus' had separate, if short-lived battles with Perez and Grosjean battling and also Maldonado and Kvyat. Grosjean then came under pressure from Raikkonen who was working his way through the field with the Ferrari easily getting past the Frenchman’s ill-handling Lotus. Sutil later overtook his E22 for 13th place.

Kimi Raikkonen then got past Magnussen, who was on a different strategy for 9th place on Lap 26, whilst Hamilton finally pitted for soft tyres and rejoined in 8th place meaning that the Top 10 was currently Rosberg, Bottas, Vettel, Alonso, Hulkenberg, Button, Ricciardo, Hamilton, Raikkonen and Magnussen.

Hamilton then got past Ricciardo for 7th demonstrating the Briton's pace on his new tyres. From 10th to 14th there was a train of cars all battling for the final points scoring position. Hamilton then attempted an opportune move up the inside of Button with the two colliding resulting in damage to Hamilton's front wing, however he stayed out and made it past into 6th a lap later although Button pitted.

The Mercedes driver overtook Hulkenberg for 5th place one lap later with the 2008 World Champion radioing to his team complaining of understeer following the earlier contact. Vettel then made his second stop and rejoined in 6th but was overtaken on the back-straight before the hairpin by Alonso, whilst his team-mate also pitted.

Ricciardo made his second pit-stop also and resumed the race in 8th place and crucially clear air to close the deficit to the front runners.

Lap 38 saw Hulkenberg, who had been promoted to 4th overtaken by Alonso and then Vettel within two corners of each other. Two laps later Vettel began to harass Alonso for his newly-appointed 4th position, although he was not close enough to make a move. Bottas then pitted from 2nd, promoting Hamilton up one place with the Finn rejoining in 3rd.

Rosberg later pitted from the lead on Lap 42 and then rejoined in the same position. One lap later, Hamilton, who was struggling with tyre wear following a lack of downforce, pitted and rejoined in 4th place, meaning that it would be a tall order if the Briton was to get onto the podium.

On Lap 46 things hotted up for Daniil Kvyat as a fire broke out on the rear of his Toro Rosso with a suspected power unit failure to blame. Fortunately despite the flames, the Russian made it out unscathed.

Four laps later, Adrian Sutil spun his Sauber coming onto the main straight and stalled the engine meaning that his car was abandoned with drivers approaching at well over 150mph. A Safety Car was expected and Mercedes quickly called Hamilton into the pit-lane, however it was decided for it to be covered under double-waved yellow flags, causing their plans to backfire.

On Lap 57, Ricciardo got past Button for 5th with a superb move up the inside of Turn 8, with Alonso close behind, whilst Hamilton closed in on Bottas for 2nd. Later on the same lap, Alonso made it past Button who was struggling for grip.

Ricciardo and Alonso then became involved in a battle with each other, the two swapped places multiple times to the delight of the German crowd, eventually on Lap 62 Alonso got past with Ricciardo retaliating and then trying to take the position back to no avail.

Hamilton and Bottas were still inter-locked in competition, with the Brtion edging closer and closer as the laps rolled down. The Briton had the edge in a straight-line, whilst it appeared that the Finn had better traction out of the corners. With two laps remaining the pair came up against traffic and it was hoped that the 2008 World Champion would be able to get closer to his rival, but it turned out not to be.

It was Rosberg though who eased to the victory, leading every single lap of the race. Bottas claimed yet another podium with 2nd, meaning that the Finnish driver would be very popular on the market for next season. Hamilton claimed a resigned 3rd after storming his way through the field from 20th on the grid.

It was Vettel who took 4th, Alonso just ahead Ricciardo in 5th, Hulkenberg was 7th, Button a dejected 8th, Magnussen 9th and Perez rounding out the points in 10th.

Our coverage will continue next weekend in Hungary for the final race before the summer break. We will have reports on every session and news that develops throughout the weekend.