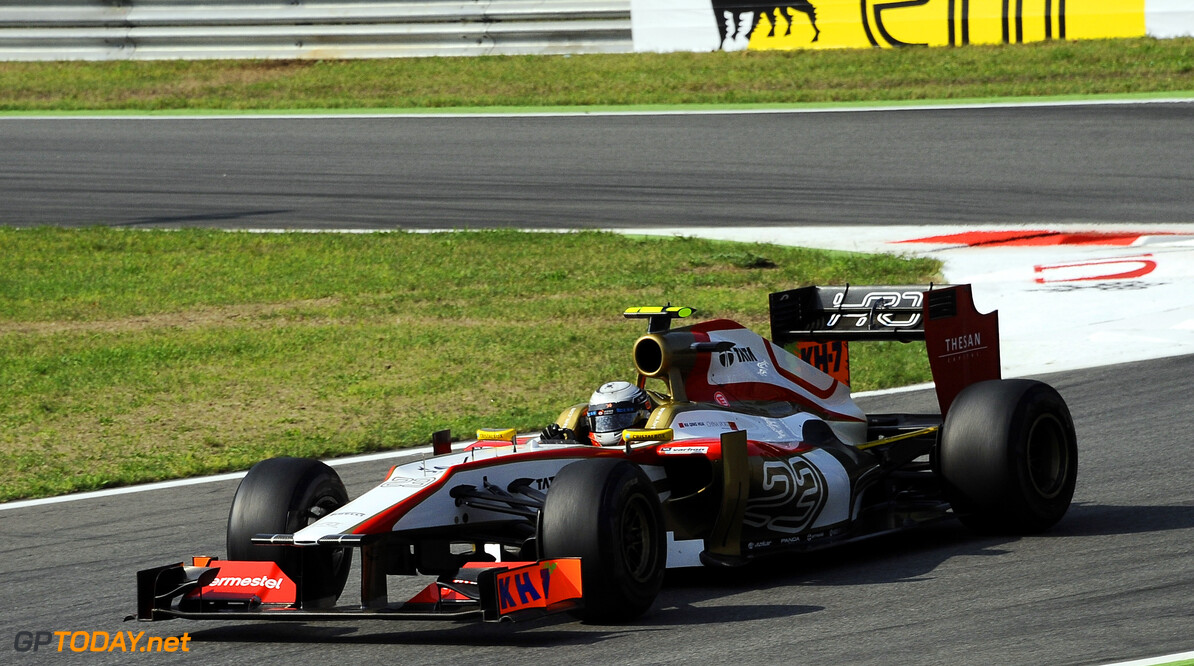 With the Indian Grand Prix just finished, the teams head west for the third to last race of the season in Abu Dhabi. Narain Karthikeyan will race for the first time at the Yas Marina Circuit after completing a solid race at his home Grand Prix. On his behalf, Pedro de la Rosa returns to a circuit where he drove at in his Pirelli test driver days and where he hopes to have the same good sensations as in India but overcome the problems that forced him to retire last Sunday. Ma Qing Hua will step into the F112 for the third time in Fridays first free practice session, replacing Narain Karthikeyan.

The Yas Marina is an anti-clockwise circuit and, like many of Hermann Tilkes constructions, it combines high-speed straights with tight corners. The Abu Dhabi Grand Prix is a spectacular event, not only because of the magnificent facilities and its location but because its the only race that starts in daylight and finished at night time. Pirelli has elected its medium and soft tyres for this race.

Pedro de la Rosa: "The Yas Marina is a circuit where braking, maximum speed and grip are essential and it's very smooth so you can be aggressive with the height and bring out a very low car. I know the track from when I tested with Pirelli, although I've never taken part in the Grand Prix, and it's a very nice circuit and even more so at night time. Our car should adapt quite well, especially in the first sector which is made up of straights and braking areas. It will be another tough challenge for our brakes so it's very important to understand what happened in India, fix it and try to finish the race."

Narain Karthikeyan: "I've never been to Abu Dhabi; it will be my first time racing there and I hope to adapt well to do the best job possible. The circuit looks fantastic and there will also be a lot of Indian fans spurring me on which is always helpful. After finishing the Indian Grand Prix in front of my home crowd Im determined to complete another good weekend in Abu Dhabi."

Ma Qing Hua: "I'm delighted to have another chance to drive again during a Grand Prix weekend with HRT F1 Team. After my two Friday outings in Monza and Singapore, I've continued to work hard both physically and mentally to be well prepared for opportunities like this one. Apart from the gym and the simulator, I've spent a lot of time going karting as its one of the best ways to train, keep fit and stay focused. To be able to continue gaining experience in a Formula 1 car and adding more miles to my tally is essential for me right now and I want to thank the team for making it happen. I'm getting to know the car and the engineers more each time and this makes me more confident every time I step in the car. My target now is to keep on progressing and learning from the team. I'm really looking forward to getting back out on track and it will be interesting to drive at a circuit like Abu Dhabi where I hav e never been before."

Luis Pérez-Sala, Team Principal: "The Yas Marina is a circuit I like with fantastic facilities and the race and everything surrounding it is spectacular. The target will be to finish with both cars after having not done in the last few races. I hope we have a good performance and that the problem we suffered with the brakes in India doesnt reoccur in Abu Dhabi. Ma has been training and Im happy to be giving him another opportunity to step into the car at a circuit hell enjoy and that will help him to continue progressing and accumulating experience."
F1 News Pirelli HRT
<< Previous article Next article >>
.