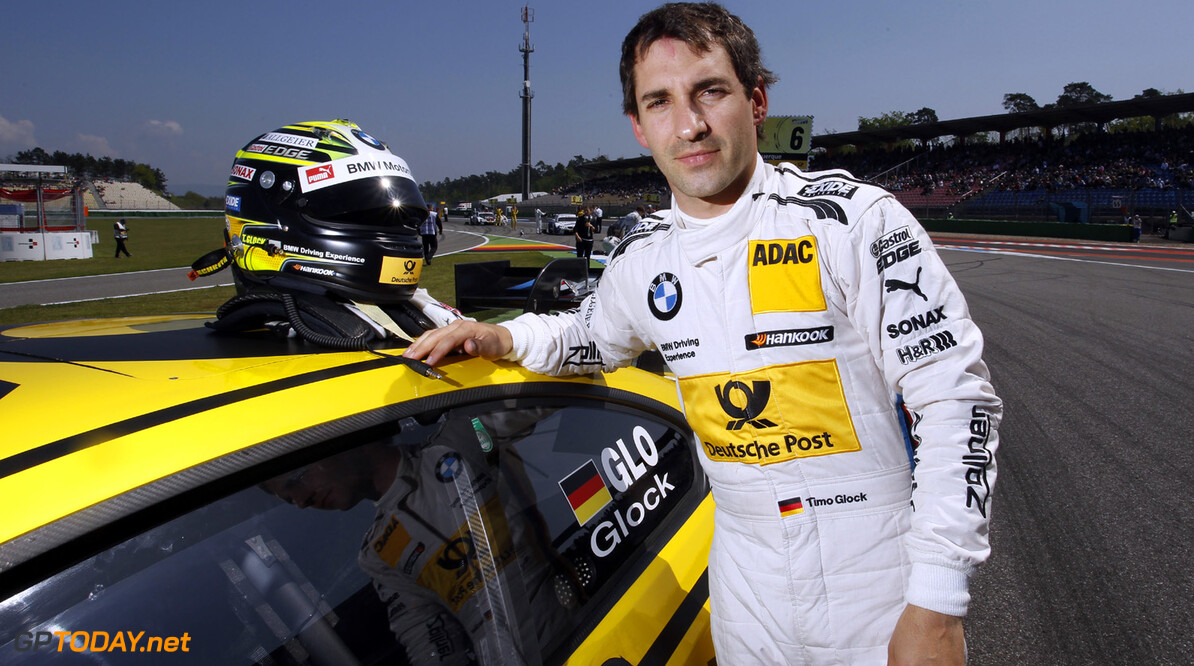 A great finale: to conclude the season, the DTM fans got to see an action-packed rain race with plenty of surprises at the Hockenheimring Baden-Württemberg. After entertaining overtaking manoeuvres, numerous door-to-door duels and spins of the DTM drivers, Timo Glock crossed the finish line as the winner with his BMW M3 DTM from Spaniard Roberto Merhi (Mercedes-Benz) and Bruno Spengler (BMW) from Canadia.

Accompanied by a fireworks display, the 31-year old celebrated his maiden victory in the DTM to conclude his rookie season. For Glock, it was his first race win since his victory in the GP2 season finale at Valencia in September 2007. "This weekend, the car was very good from the beginning. I was able to control the race in spite of the rain. I want to thank Roberto for the great and fair duels. Today, we will have a decent party," the ex-Formula 1 driver said after his successful race.

Swede Mattias Ekström was the best-placed Audi driver in fourth, but that wasn't enough for the brand from Ingolstadt to win the manufacturers' title. Thus, BMW not only claimed first and third place at Hockenheim, but also repeated its success from last year in the manufacturers' championship, ahead of Audi and Mercedes-Benz. The Audi Sport Team Phoenix with Mike Rockenfeller and Migue Molina won the teams title. In total, 122,000 spectators attended the final DTM weekend of 2013.

Especially the driver who finishes second got high acclaim. After 41 laps and 187.534 kilometres, Merhi took the chequered flag 2.7 seconds behind the winner. The 22-year old succeeded in making it all the way from 21st and second-last place on the grid to the front, and that in spite of a handicap. "I made a jump start and was given a drive-through penalty. Then, I drove my race without any pressure. The car was great and we had a very good strategy. I was able to drive fast laps and I made it up through the ranks more and more. A great race for me," Merhi said about his great recovery, during which he even temporarily led the race.

Ekström was happy with his fourth place: "My start was really bad. Fortunately, the drivers in front of me made mistakes, too, so that I was able to make up positions. When the track dried out, I had more grip and it was fun again. Fourth place is fantastic, because then, you don't get such a heavy trophy that you have to carry home," 'Eki' said with a smile. British driver Andy Priaulx (BMW) finished sixth behind Molina, scoring his best result of the year.

DTM champion Mike Rockenfeller (Audi), who already secured the title in the penultimate round at Zandvoort, only finished 16th this time. "Of course, I had different expectations, but I was hit by another car right after the start. After the start, the steering was bent and I there wasn't much I could do. Today, it simply didn't work out," said 'Rocky', who failed to score points for the only time this season.

Marco Wittmann won a title, too. The 23-year old BMW driver was excluded from the results at Hockenheim, where he had finished 21st, because he failed to come in for weighing after the race. However, he had already secured the accolade for the 'Best Performance' of the most successful DTM novice of the year.

Jens Marquardt, BMW Motorsport Director: "We have always kept our faith in Timo. But he is not just strong in the rain. Surely, we will have a lot of fun with him next year. First and third place is great. Today, we have also won the manufacturers' title, so there is a lot to celebrate."

Dieter Gass, head of DTM, Audi: "I am really happy for Timo Glock. He is a driver who is very good for the DTM. We wanted to make it onto the podium, but unfortunately, we didn't succeed. We have seen many great and also tough duels. We are happy with victory for the Audi Sport Team Phoenix in the teams' classification."

Wolfgang Schattling, head of DTM management, Mercedes-Benz: "We are taking the positive elements from this race. Starting from the last row and then almost winning the race is a great achievement. In the rain, our car was the fastest on the track. In the future, we want to have that in the dry as well and we will work hard for that during the winter."
DTM News Roberto Merhi Marco Wittmann Mercedes
<< Previous article Next article >>
.