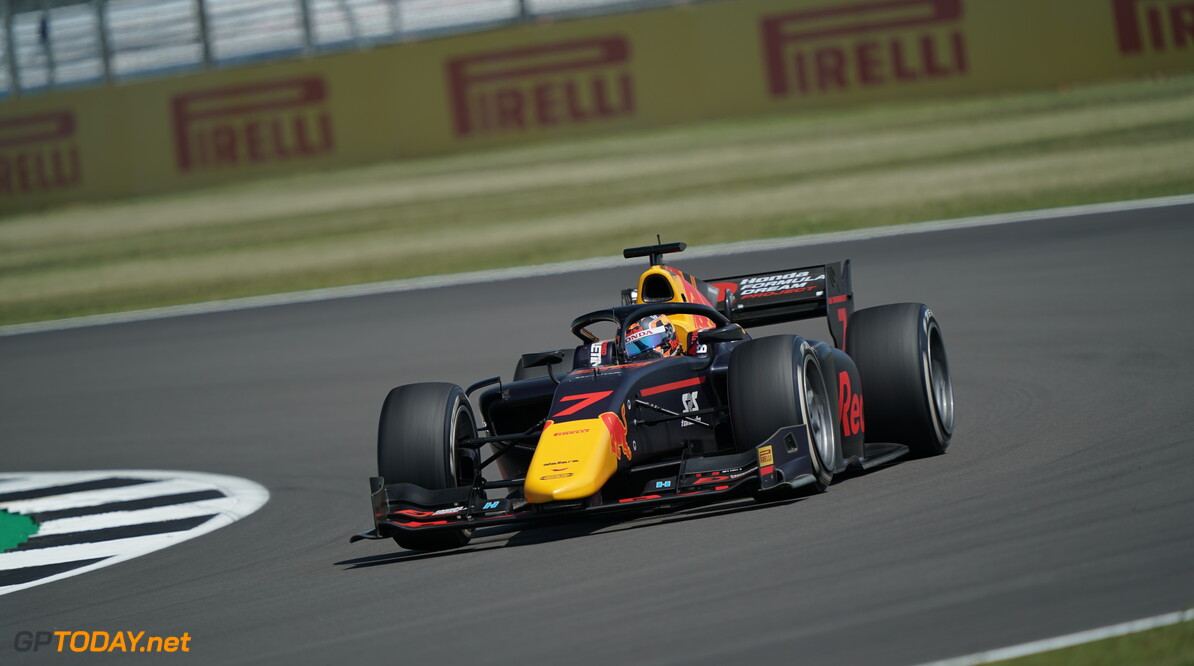 It was the Carlin of Yuki Tsunoda that took the win this afternoon in Belgium as drivers raced on in honour of their fallen friend Anthoine Hubert one year on from the Frenchman's fatal accident at the circuit.

Nikita Mazepin finished in second due to a five-second penalty for forcing Tsunoda off the track, while Mick Schumacher rounded out the podium in third.

As the lights went out. second-placed Mazepin challenged pole-sitter Tsunoda. but ended up losing out the Matsushita down the Kemmel straight, as Schumacher moved up to fourth.

Guilherme Samaia stalled his Campos on the grid, prompting a yellow flag on the first lap. The race continued as the marshals quickly cleared the stricken lap.

Jehan Daruvala was forced into an early pitstop for a front wing change after contact at the start broke his wing, leaving him ahead of only Samaia, who was a lap down after stalling on the grid.

Mazepin reclaimed second-placed after catching Matsushita and passing the Japanese driver down the Kemmel straight. Schumacher was next to pass Matsushita, as did Deletraz and Robert Shwartzman as the MP Motorsport car struggled with grip early on.

Matsushita ended the race in the barriers after coming together with teammate Felipe Drugovich, braking the front wing of Drugovich and sending himself spinning into the barriers with a puncture. Matsushita was unharmed from the accident as the Virtual Safety Car was deployed.

Racing resumed on lap six, as race leader Tsunoda held a two-second lead to second-placed Mazepin. Callum Ilott ran off the road at Les Combes while battling with Pedro Piquet but quickly handed the position back to the Brazilian.

Mazepin and Schumacher were the first of the leading cars to pit for medium tyres after pitting on lap ten, with Schumacher suffering from a slight delay with his stop, as the Prema pit crew struggled with an issue on the front right tyre.

Tsunoda stopped on the following lap, with the Carlin suffering also, as did Shwartzman. Mazepin took the lead but was put under investigation by race control for an unsafe pit release.

Yuri Vips, standing in for the injured Sean Galael at the Dams team, worked his way up to seventh on the alternate strategy, taking sixth from Marcus Armstrong on lap 12 in his Formula 2 debut.

Guanyu Zhou pitted on lap 17, rejoining in sixth but on the softer tyre, as Mazepin retook the lead. With pressure from Ghiotto, Zhou locked up at Les Combes and went straight on, losing the position to the Hitech of Ghiotto.

Zhou dropped down to ninth, as Piquet looked to defend from Ghiotto, but would lose two positions and drop to eighth as Dan Ticktum also passed the Brazilian.

Fourth and fifth went to Louis Deletraz and Shwartzman, while Ticktum and Zhou crossed the line in sixth and seventh.

At the front, Tsunoda pushed to close down the gap to leader Mazepin, getting close enough to get within the DRS zone of Mazepin on lap 19, as teams and pit members, including Juan Manuel Correa, stopped to applaud in honour of Hubert, the lap representing the former Arden driver's race number.

Back on track, Piquet dropped further down to tenth as Zhou looked to recover from his earlier problems. Zhou looked to pass teammate Ilott at Blanchimont but thought better of it and backed off, but he got ahead of Ilott to take eighth place on the pit straight.

Tsunoda went for the lead at Les Combes on lap 20, but hard defence from Mazepin forced Tsunoda wide and unable to get around the Russian driver. Mazepin was then put under investigation for pushing Tsunoda off the circuit.

HWA's Artem Markelov was handed a drive-through penalty for leaving the track and gaining an advantage, as Tsunoda closed in on Mazepin once again.

With four laps to go, Tsunoda held onto the gearbox of Mazepin but was unable to find a way around the Hitech. The pair once again came close at Les Combes on the penultimate lap, but Mazepin still held on to the place, much to the annoyance of Tsunoda.

Mazepin crossed the line to take the victory on the road but was unsure as he was still under investigation for the unsafe release. Tsunoda crossed right behind the Russian in second.

In the end, the victory was awarded to Tsunoda after Mazepin was handed a five-second penalty for his defence on Tsunoda. Mazepin was then put under investigation once again in Parc Ferme after the Hitech ran into the second place board, almost hitting Tsunoda with the board in the process.

Eighth and tomorrow's pole position went to Roy Nissany after a good showing from the Trident saw him move up from the grid from fifteenth, as Ghiotto and Ilott rounded out the top ten.