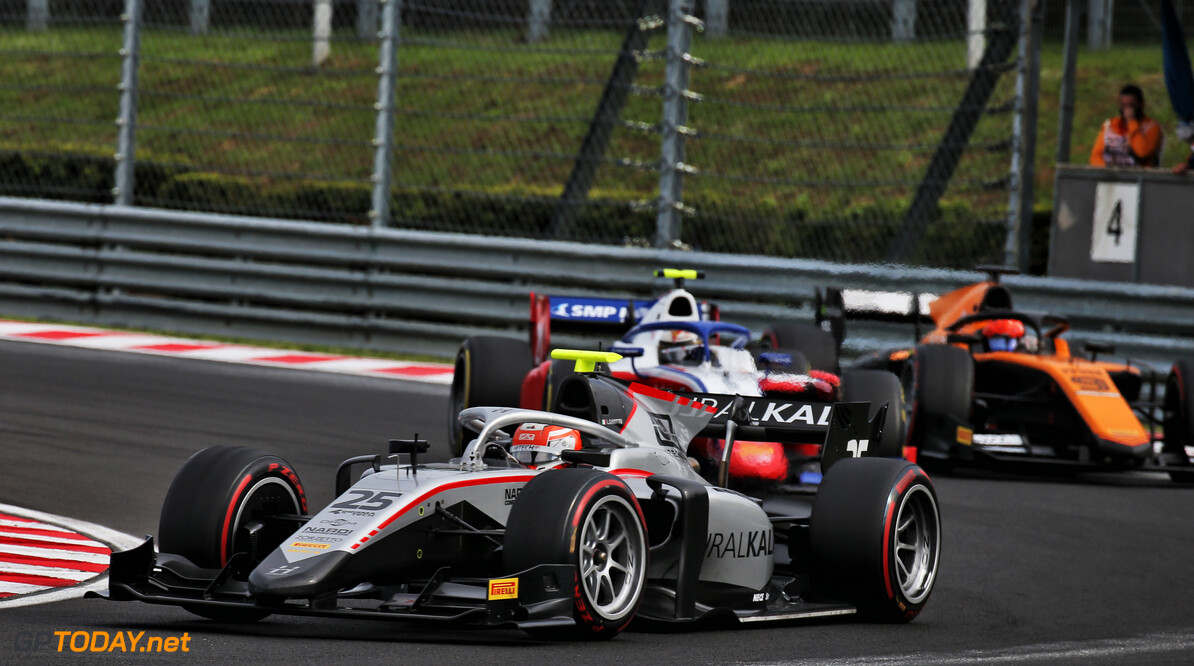 It was the Hitech of Luca Ghiotto that took the win in this morning's race in Hungary after deciding not to pit as drivers suffered from tyre wear, ahead of a fast-charging Calum Ilott, while Mick Schumacher took his second podium of the weekend in third.

Pole sitter Ilott managed to hold the lead off the line, while Ghiotto and  Louis Deletraz battled for second position, with Ghiotto managing to hold the place from the Charuz of Deletraz.

Dan Ticktum managed to move up to fifth on the opening laps, but unfortunately would be forced into early retirement as he complained of a loss of power. Schumacher, starting from sixth after yesterday's podium, managed to squeeze past the Hitech of Nikita Mazepin for fourth

Ilott managed to pull out a gap to second-placed Ghiotto, as Yuki Tsunoda was shown a black and orange flag for front wing damage. Schumacher was showing good pace, challenging Deletraz for the final podium position, taking third from the Charouz.

Guanyu Zhou had brief contact with Sean Galael as the pair came through the final corner, while at the front Ghiotto chased after Ilott, setting the fastest lap in the process.

Robert Schwartzman and Mazepin finished in fourth and fifth, while sixth and seventh went to Deletraz and Jehan Daruvala.

Yesterday's winner Schwartzman moved up the order into fifth on lap twelve, as third-placed Deletraz opted to pit as drivers struggled with high tyre degradation.

Schumacher was the next front runner opting to pit on lap seventeen but suffered from an issue on the front right tyre during the stop, while Schwartzman felt that the tyres were getting better as the race went on.

Leader Ilott was the next driver to pit, handing the lead to Ghiotto, as did Schwartzman. Deletraz got past Schwartzman as the Russian left the pits, despite being on a slower compound, as Schumacher also got around his Prema teammate.

Schwartzman then lost another place to Daruvala, after going off the track at the turn six chicane. He then made contact with Mazepin as he tried to get around the Hitech at turn five, as he eventually took eighth coming out of the chicane, the pair being put under investigation for the contact, with no further action being quickly decided by the stewards.

With seven laps to go, Ilott set the fastest lap as he looked to close the gap to race leader Ghiotto. Ilott easily got around Giuliano Alesi for second with five laps to go, as Schwartzman moved up to sixth at Daruvala's expense.

Schumacher moved past Deletraz and Alesi return to third, as Deletraz took fourth from Alesi. who then quickly lost fifth to Schwartzman.

A rapid Ilott managed to close the gap to six seconds as he pushed to catch Ghiotto, but the Italian managed to nurse his tyres and take his first win this season and Hitech's first win in Formula 2, with Ilott recovering to be just four-tenths of a second behind.

Zhou took the final point in eighth, as Marcus Armstrong and Alesi rounded out the top ten in ninth and tenth.