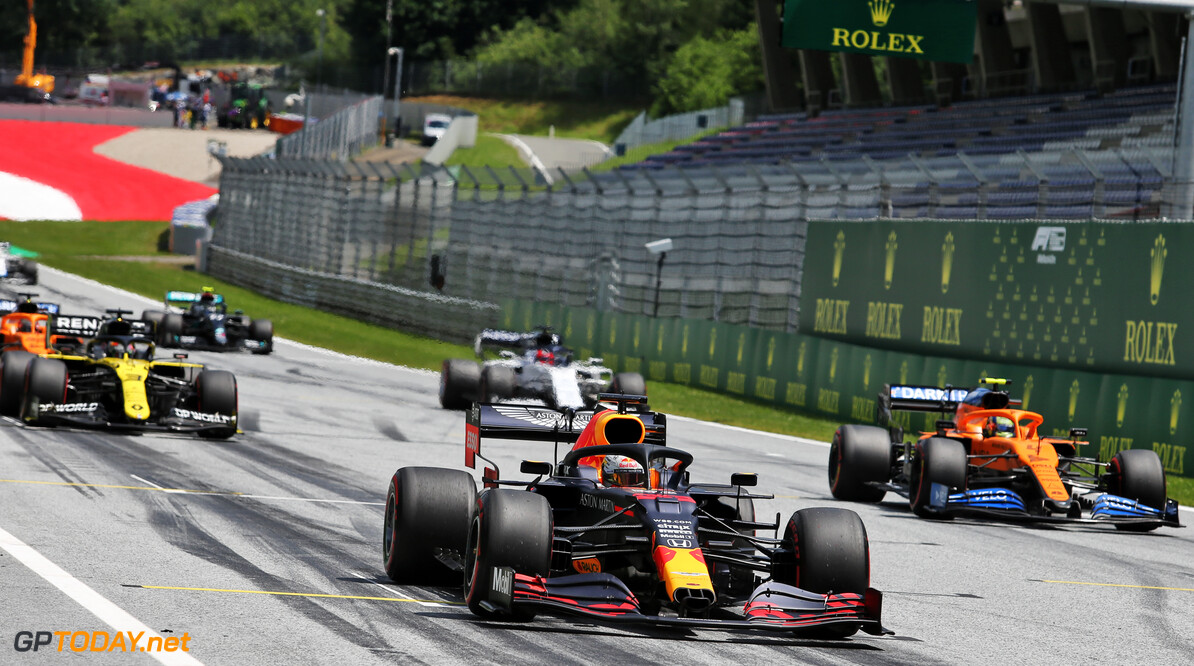 The 2020 Formula 1 season kicks off later this afternoon, with Mercedes occupying the front row for lights out at the Red Bull Ring.

Valtteri Bottas will look to lead his teammate Lewis Hamilton into the first corner, as he starts from pole position despite making a major mistake on his final hot lap in Q3 on Saturday.

Both Mercedes cars will start the Austrian Grand Prix on the soft compound, meaning they will have an advantage over Max Verstappen in third place at the start, who has the medium tyres attached to his Red Bull.

Verstappen is the only driver inside the top ten that managed to progress from Q2 with the medium compound, meaning he can go longer into the race and benefit from a potential safety car that could be deployed after his rivals pit.

Verstappen will need to be cautious of Norris off the start line, but the Red Bull driver will have the benefit of starting on the clean side of the track, despite having less pull away grip from his medium tyres.

Red Bull was encouraged by its long-run pace on Friday, however true answers only ever come in the main event itself, when there is nothing left to hide and all must be put on the table.

With slipstream and DRS set to be as powerful as ever this year due to the increase of drag over the last handful of years, staying as close as possible to the Mercedes cars will be crucial for the 22-year-old.

Pirelli has not outlined much difference in life between the soft and medium compound, as it expects the former to go 24 to 28 laps before a stop is needed for the hards.

For the mediums, Pirelli says the tyre should last between 27 to 32 laps before a pit stop for the hards, which is just as fast a strategy as soft to hards.

However, Pirelli confirms that the soft tyres could go over 30 laps - so perhaps watch out for Alexander Albon staying out as late as possible to give Mercedes a headache and provide Verstappen with more of an opportunity later in the race.

Expect Sebastian Vettel, who is starting from outside the top ten, to stick on a set of medium tyres for the start of the race, which will allow him to go longer into the race and open up more opportunities as well.

This will also allow Ferrari to split its strategy, as Leclerc is forced to start on the softs due to progressing from Q2 on that compound.

The battle between Racing Point and McLaren will be intriguing, as the latter is confident that Racing Point holds the advantage over race-trim despite being slower than the Woking-based outfit in qualifying.