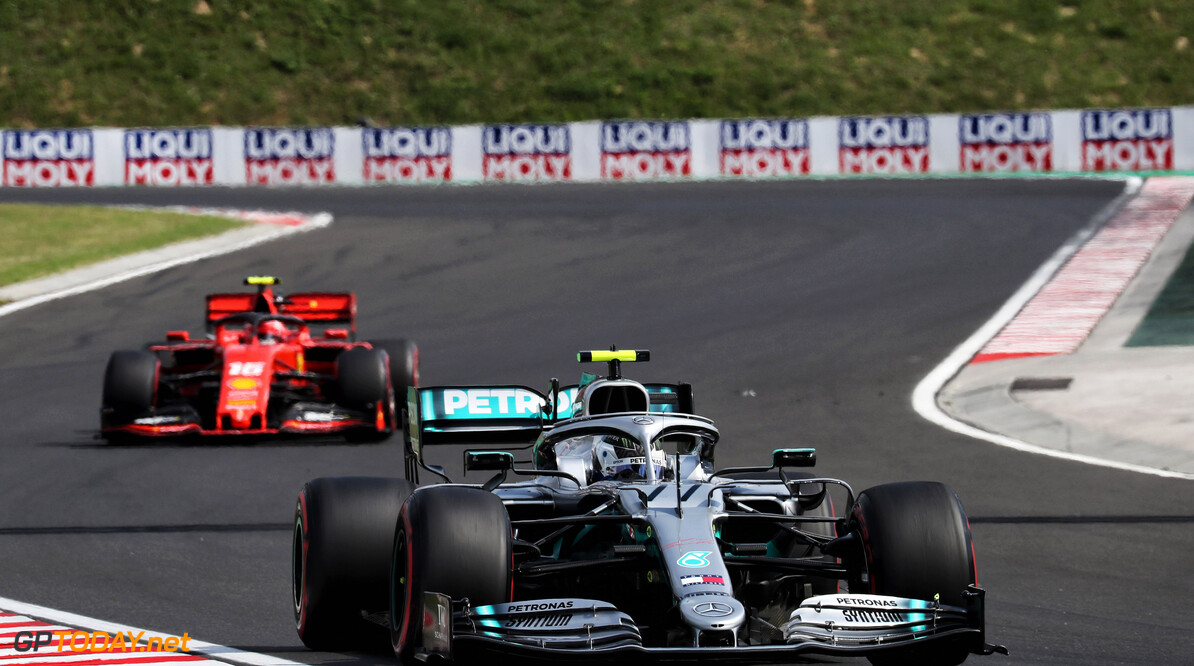 Valtteri Bottas has called Charles Leclerc's move on the opening lap of the Hungarian Grand Prix as "completely unnecessary".

The pair made contact on the run-up into Turn 4, which saw Bottas come away with front wing damage, forcing him to pit for a new front wing.

The Finn then set about on his recovery drive, managing to pull his way back up to eighth place.

Bottas had an overall scruffy opening lap, locking up into Turns 1 and 2 and making light contact with teammate Lewis Hamilton before touching with Leclerc.

"I was on the outside of Verstappen, so I tried to brake late and tried to go for the outside," Bottas said of his start.

"He braked late as well, so I had a bit of a lock-up and that caused a bit of a flat spot. Going into Turn 2 I had some understeer because of that.

"But it was all okay. Lewis was also on the outside, but there was still room for two of us. Maybe I left a bit too much because he could carry good speed into Turn 3.

"We were side-by-side, for sure he didn't leave any room for me, so that compromised my exit out of Turn 3, I had to lift.

"Then on the way to Turn 4, Charles came on the right-hand side and suddenly swept across, and took my front wing.

"So that was it really, it compromised the race - losing big chunks of time in the beginning, then I stopped early, going through traffic all through the race, that was really the story."

Leclerc 'lucky' to sustain no damage

Bottas added that Leclerc was lucky to escape the incident with no damage, as it could have resulted in a puncture for the Ferrari driver.

"At the time when it happened I thought I was just focussed on something else, and maybe didn't see him, but it happened pretty quick," he added.

"But then when I saw the onboard, and when I saw Vettel's onboard, it was clear that I was just going straight ahead, he was on the right, and he would have been ahead of me anyway before Turn 4 going straight.

"But then suddenly he swept across and for me it was too late to react. I love hard racing, that's for sure, but that was completely unnecessary, and for sure compromised my race.

"He was lucky enough not to get a puncture. That's not how it should be."