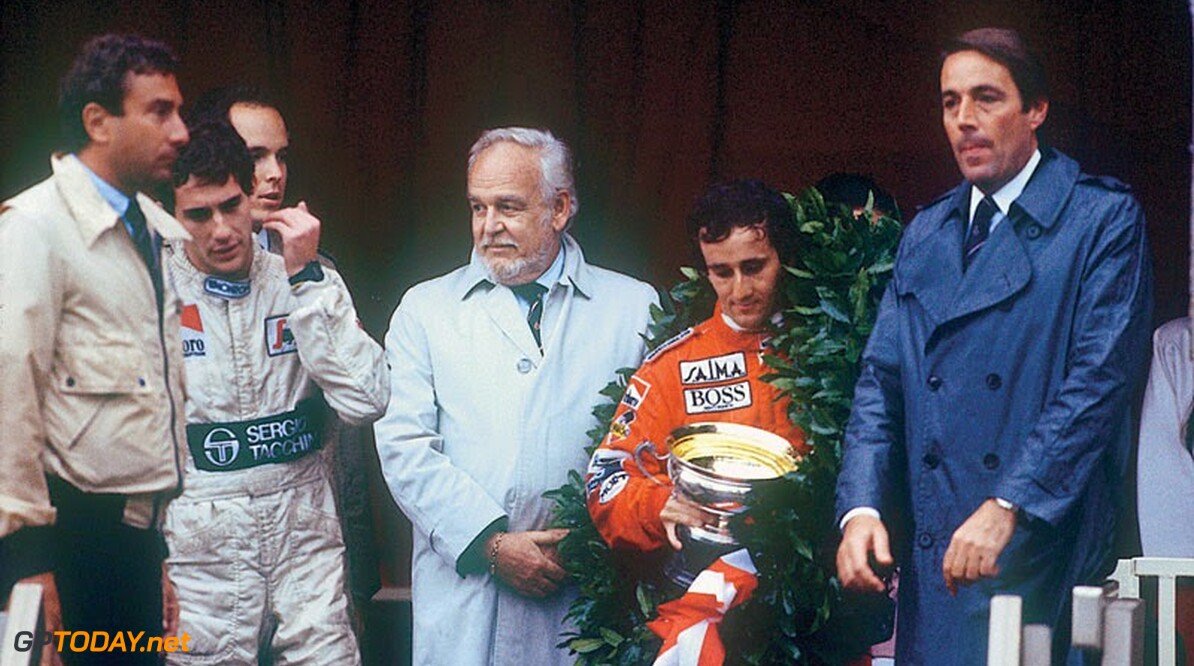 When Ayrton took his first podium, opinions about the course of the race were different. Many people thought afterwards that there was another reason why the race was flagged off by race director Jacky Ickx. At the time there were a number of typical 'conspiracy theories' that started to live a life of their own. Mud was thrown over and over again, as race director Jacky Ickx started a lawsuit and eventually Alain Prost was half a point short of becoming world champion.

Looking back at our previous report in this series, we saw that Alain Prost on the 30th lap drew the attention of the race committee to the fact that further driving was impossible. The race was finally red flagged at the start of the 33rd lap. Former Ferrari Formula 1 driver and active Porsche driver in the Group C championship Jacky Ickx was 'Clerk of the Course' (race directpr).

Ickx was accused of conflicts of interest after the race. We are talking here emphatically about accusations of other people (media) against Ickx. We have therefore also collected all possible newspaper articles from that time to show the reader what happened that day, June 3, 1984, according to the media.

The accusations against Jacky Ickx also came from the FISA. The FISA, led by Jean-Marie Balestre, questioned Jacky Ickx's performance as a contest leader. According to Ickx, Balestre had: "Made some totally unacceptable statements about the Monaco Grand Prix that I find unforgivable.

Balestre's accusation was: "Jacky Ickx finished the Monaco race earlier because he wanted to enable his employer (Porsche) to win the race with Alain Prost and TAG". A strange statement by Balestre, but one that is understandable. Of course, Balestre wanted his friend Alain Prost to win the race.

It was not the case that Balestre did not support this decision. In fact, Balestre was 100% behind it, but as President of the FISA, he could never sell it. That's why Balestre would criticise Ickx afterwards.

"I never bring a lawsuit against anyone at all. Balestre has made unacceptable statements. He really insinuated several times different things about me. He questioned me with his statements. My reputation has always remained intact. I will not tolerate anyone saying that my reasons were anything other than in the name of the sport, while I was doing my duty. "

Later Ickx was asked if he deliberately stopped the Grand Prix because he preferred a Porsche (TAG) powered engine. Ickx said: "That's insinuating that I obeyed the instructions of one person in particular. I thank a FISA chairman (Balestre) for saying something like that. He was the one who made me race director of the Monaco Grand Prix. At that moment he didn't see any problems to appoint me.

"He gave me the license to work as a race clerk. At the time I informed Balestre by letter that I would go to Monaco as soon as Yvan Leon, the FISA-secretary, had granted me the licence to be a race clerk. If he thought I could not have been a driver, TV commentator and race director at the same time, he should have said so earlier. In any case, I'm going to the court to defend myself. I regret having to do this. It's normal for you to come across criticism in your life, but there are limits to what you can do or say. For Balestre, it's just another court case. He has to hire a full-time lawyer," Ickx was quite clear in his statement.

The Belgian was 100% sure that he had made the right decision: "First of all, the red and black flags were shown simultaneously on all flag points of the circuit. This indicates that the drivers have to slowly return to the pits. As far as I knew the weather conditions wouldn't improve that afternoon.

"So I had no intention to restart the race. I thought it was a good opportunity to warn everyone that the race was stopped, by releasing the black and white checkered flag about half a minute after the red and black flags were shown together. Of course, you can question the details of the procedure, but my opinion is that the safety of the drivers is always paramount.

"The ability to deny Senna a victory did not influence my decision. It didn't matter to me who would win, whether it was Prost or Senna, that didn't matter to me. I aborted the race because the safety of the drivers could no longer be guaranteed. I have the impression that the press would have preferred Senna to have won if I had dropped the flag two laps later, there would never have been a discussion and everyone would have been happy.

"This decision was ultimately in Prost's favour, this is the way it happened, I wasn't aware that it would turn out that way. I didn't see Prost's signals during the race either. Race Control looks out over the pool, away from the pits. I believe the signals he gave were for his own team. Even if I had seen those signals, they would not have influenced my decision. It has nothing to do with the matter.

Ickx eventually received a $6,000 payment for his performance as a race director. No evidence of conflicts of interest was found. Ickx, a much appreciated man in the Formula 1 world, didn't suffer much image damage in the end.

Salient detail: If the race had reached 75% and Prost had let Senna through, Prost could have added 6 points and not the 4.5 points he received for the cancelled race. With this, Prost would have been world champion in 1984 as he was only half a point short for the title.