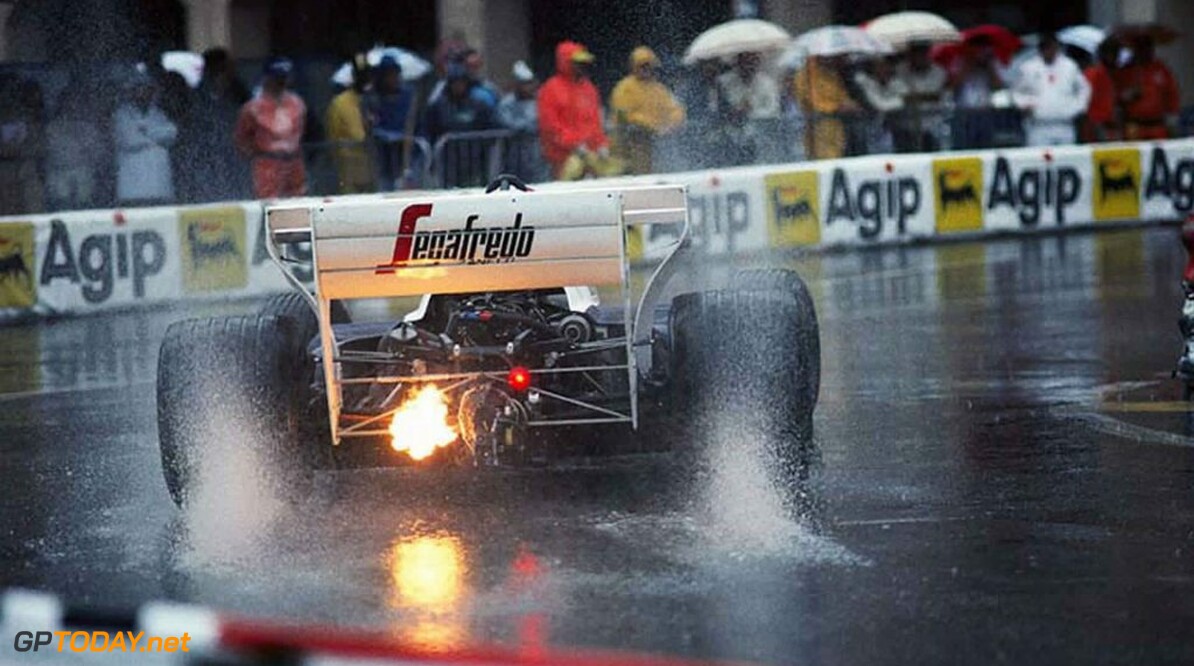 Of course, we can't ignore Ayrton's absolute breakthrough in Formula 1 in our report. It is well known that the Monaco Grand Prix in 1984 was the Brazilian's first 'wow' race. On a wet street circuit in the principality he showed great things in his Toleman Hart. Yet we do not only draw our attention to Ayrton, but also to Stefan Bellof.

Prior to the race

Ayrton went to Monaco with confidence despite the fact that he would race in Monaco for the first time. Toleman had introduced the TG184 during the Grand Prix of France, the race preceding Monaco, a new design involving Rory Byrne and Pat Symonds. The car still used the 1,500 cc Straight 4 Heart engine.

"This new car is really very good, very competitive and very fast. There are still some things missing, but I am sure this car will take us further", Senna said. "I have mapped out a certain route, I have to climb the ladder. Every position will count for me."

Ayrton was positive and hoped for a good result on the street circuit. Bellof would qualify as the only Tyrrell for the Grand Prix. The German barely made to the race, as until 1986 only 20 drivers appeared on the grid for the main event. Today this is of course also the case, the only difference is that there were more registrations back then during a Formula 1 Grand Prix.

Teammate Martin Brundle crashed during qualifying and was not allowed to start by the medical doctor of Formula 1, Professor Sid Watkins. Alain Prost was the fastest in his McLaren-Tag. The Frenchman was one-tenth faster than Nigel Mansell. Ayrton qualified 13th with a gap of 2.348 seconds behind Prost. Stefan Bellof was one-tenth faster than Marc Surer's Arrows-Ford and as a result, started the race from 20th and last place on the grid.

The start of the race was postponed by 45 minutes. Heavy rainfall had made the asphalt in Monaco extremely wet. Niki Lauda thought this could cause a problem in the tunnel, as that part of the track was dry. There had been problems at the Monaco circuit in the past. In 1981 the start of the race was also postponed because there was a fire in the kitchen of the Loews Hotel. The kitchen of this hotel is still above the tunnel today. Lauda involved Bernie Ecclestone in the discussion to wet the asphalt in the tunnel.

According to Lauda there was too much oil on the road surface, which was laid by the drivers from support races. Lauda explained that in the morning, during the warmup, he had experienced problems with the slippery road surface. As head of the Formula One Constructors Association (FOCA), Ecclestone decided to respond to Lauda's call. A local fire truck drove into the tunnel and sprayed the asphalt with water.

At the start, Alain Prost took the lead in the race. He was followed by Nigel Mansell and the two Ferrari's of Rene Arnoux and Michel Alboreto. Prost made a jump start, this was not registered by the race committee, and nothing came of it. It would not be the last time that there was a discussion because Prost made a false start in Monaco. During the 1993 race, to which we will also pay attention to later in our series, the Frenchman was punished.

Both 'young-guns', Senna and Bellof, had a rocket launch. Senna went from 13th  place in one lap to eighth place. Bellof, last started, did even better, he came through to 13th after one lap. After the fifth lap Ayrton, was eighth. One lap later, he caught up with Winkelhock. Bellof had already worked himself up to ninth place. At the head of the field, Mansell reduced the gap to leader Prost. After the spin of Michele Alboreto, Ayrton was sixth. "Senna shows here that he is an exceptional talent, all talents come to the surface in the rain", 1976 world champion James Hunt said.

In the chase of Keke Rosberg, Ayrton braked into the chicane. The chicane at the exit of the tunnel in 1984 had a different configuration to how it is today. The chicane in that year was smoother and faster. Ayrton bounced over the kerbs here which damaged his suspension. "Despite the fact that I am not convinced that he can win this race, he will have to be careful, he still has little experience", said Hunt.

Hunt's statement came in the tenth lap of the race. Mansell had already taken the lead on the 12th lap. Ayrton was 33.896 seconds behind Mansell at that time. On the next lap, Ayrton caught up with Rosberg. Ayrton rapped Arnoux and was fourth, which became third when Nigel Mansell hit the crash barrier during the climb to Casino. Ayrton started hunting Niki Lauda. Stefan Bellof had climbed to sixth place, and was stuck behind Rosberg. On the 16th lap James Hunt said the following: "We have to keep an eye on Senna and Bellof at this moment, they are showing a great speed.

On the 19th lap, Ayrton passed Niki Lauda on the straight. "Sensational" screamed Murray Walker through the microphone. Ayrton started to put pressure on Alain Prost after the overtaking manoeuvre on Lauda.

On the 23rd lap, Ayrton clocked the fastest lap of the race. His time of 1:54.674 was over four tenths faster than Elio de Angelis, as the Lotus driver drove 1:55.085. At the same ti,me Niki Lauda spun out of the race at Casino, bringing Bellof into fourth position. Bellof then continued and passed Arnoux.

"A great drive from the German", said Walker. Hunt, who was never really a dan of Arnoux, added: "The Frenchman pushed him off the track with all the risks, but we've been used to Arnoux's stupid and ridiculous actions like this for years."

In three laps, Ayrton cut the gap to Prost by ten seconds. The gap was, after he had passed Lauda, about half a minute. At the start of the 27th lap, it was only 21 seconds. "We are looking here at the introduction of a first class talent, Ayrton Senna", Hunt said. "The rain is now coming from the sky but Senna has the same tires as the others and just drives faster at three seconds per lap.

The fact that Prost was under pressure was noticed on the 30th lap. Prost waved to the race committee that they had to top the race. In the same lap, Ayrton drove four seconds faster. Prost, not a fan of these conditions, had to do everything in his power to keep the lapped car of Alboreto behind him. Ayrton caught up with Alboreto, but at the same time, race clerk Jacky Ickx decided to hang out the red flag. "French Timing", said James Hunt. Prost stopped on the straight and Ayrton raced past. The result eventually went back to the previous lap. Ayrton finished second, Bellof third. "Senna has all the reasons to be upset about the decision of the race committee", Hunt said.

Prost won the race and half points were awarded. This meant for the Frenchman that he could add 4.5 points to his championship. Had the race committee not shown a red flag it was clear that Senna would have passed, but Senna's damage would have made him drop out. Prost in reality was in a fight against Bellof.

But Tyrrell was disqualified halfway through the season. Prost hadn't had any pressure in hindsight and with a certain second place (since Ayrton wouldn't finish the race) he became world champion. The race committee should only have allowed the race to continue up to 75% of the distance. At the end of 1984, Alain Prost was 0.5 points short of the world title, a world title that was lost at the beginning of the season in Monte Carlo.

Looking back after the race and taking the result means that Ayrton was half a minute faster than Prost during the race, we measured this from the tenth lap. Bellof on the other hand was more than one minute from Prost at the start of the tenth lap. He finally came in at 21 seconds. The fact that Bellof went from last to the podium gives the title of this piece extra value.