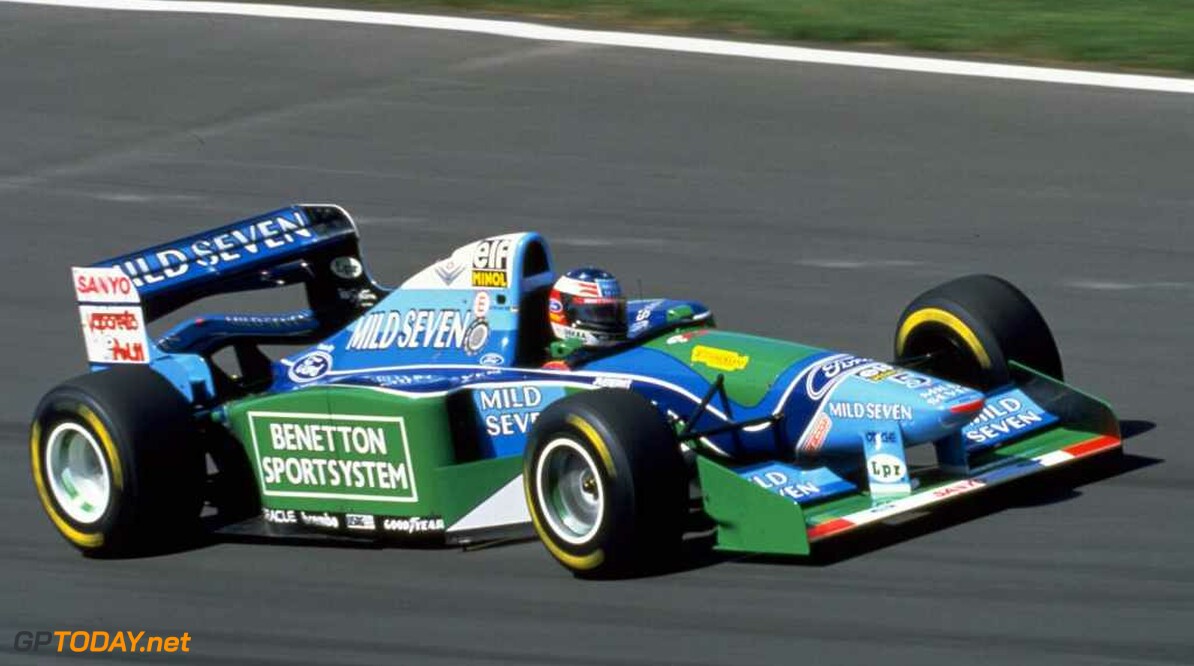 Michael Schumacher will turn 50 on Thursday, 3rd January 2019 which is reason for F1Today to look back through of the man who leads many of Formula 1's drivers' statistics. In the first edition - we look at his first few seasons in Formula 1, which saw him take his first victory and his maiden world championship.

First full season and a victory at Spa Francorchamps

In 1992, Martin Brundle became Michael's new teammate. Prior to the season, the German was already in the spotlight. Michael had, (not counting the two outings at the last races of 1991, made a great impression. It was clear from the first test sessions that the Benetton B192 (which was introduced during the fourth race) was a very stable car. The season commenced with the Benetton B191B, an update of the car that was used in 1991. Michael came fourth in the opening race at Kyalami, which marked his best result so far. Three weeks later Michael was on the podium for the first time in Mexico. The third place he bagged at the Circuit Hermanos Rodriguez was dubbed by the media as 'best of the rest'. In 1992 there was nothing anyone could do against the dominance of the Williams Renault FW14B. The Williams was much more advanced than the Benetton and was equipped with a strong and smooth Renault RS3 V10 and RS4 V10 engine. Michael had to do make do with the Ford V8 that was developed in collaboration with Cosworth. But the fact the Benetton could compete immediately with the McLaren MP4-6 and the MP4-7 introduced in Interlagos was a surprise for many. Nevertheless, the experts were convinced that Schumacher, despite his limited experience, was much further ahead than his experienced teammate Martin Brundle.

Michael would shine at several races throughout the year, including the Grand Prix of Spain. Michael managed to interrupt the dominance of the Williams drivers and drove to second place in qualifying. During the wet race that followed on Sunday, he was, as in 1991, the fastest man on the track for a long time. He would eventually finish second behind the winner Nigel Mansell. But the evidence that Michael had little experience became particularly clear during the races in San Marino and France. The German, by his own fault, didn't finish the race at Imola, and during the French Grand Prix at Magny Cours he got beef with Ayrton Senna. Senna and Schumacher had a history with each other, despite the fact that they only raced each other for a few months. The German was extremely critical of the driving style of the world champion at the press conference after the Brazilian Grand Prix.

"Ayrton played a game with me, and when he accelerated from the last corner before the straight he slowed down, let me pass, to catch me up at the end of the straight choosing the slipstream and passed me back. I am very upset about Ayrton,  and a triple world champion should not do that." Senna then criticised Michael several times, called him arrogant and a little child. It finally came to a fierce collision on the grid in Magny Cours where Senna was hit by Schumacher after the first start of the race. Senna would get face-to-face on the grid with the German: "Michael, if you have a problem with me, then you should say that to me, but do not trick me again."

Schumacher also crashed in the stadium section during qualifying at the German Grand Prix. He also spun several times during the weekend of the British Grand Prix and spun off spectacularly in Hungary due to a broken rear wing. But 366 days after his F1 debut, Michael went back to win the Belgian Grand Prix at Spa Francorchamps. At a tactically excellent race, Michael was the first to switch to slicks. While others continued to ride on their rain tires for too long, Michael chose the aggressive strategy. His victory was followed by a third place at Monza and a second place at the final race in Adelaide. Michael was seven-tenths behind Gerhard Berger for the victory. He finished third in the championship that year, in front of Ayrton Senna and only three points behind the second Williams driver Riccardo Patrese.

A very solid season in a difficult year for Benetton

With the B193, Benetton wanted to attack second place in the constructors' championship, which meant McLaren had to be defeated for this. Bookmakers tipped prior to the season that Michael could win at least three Grands Prix. It would ultimately turn out to be one victory at Estoril in Portugal.  But Michael had a solid season, dominating teammate Patrese throughout the year. The Benetton B193 was able to launch a challenge on the McLaren MP4-8. Benetton decided that during the 1993 season the development would be shifted to the 1994 car. With 52 points Michael obtained fourth place in the championship, and scored 32 points more than teammate Patrese. Patrese would also stop in Formula 1 after 1993. And in came Ross Brawn and Rory Byrne, two excellent employees around Michael who would tailor the car for the 1994 season.

A dominant beginning of the year 1994

JJ Lehto was contracted by Benetton to become its second driver. The Finn, who came from Sauber, signed for two years. Jos Verstappen was the test and third driver. He became the second driver after Lehto to suffer a serious accident during one of the first tests at Silverstone and injured his neck. Schumacher drove the fastest times on several occasions during the tests before the season. This aroused suspicion from Ayrton Senna in advance. Senna started the season in the Williams-Renault but had a difficult preparation. Michael's preparation was clearly better. The Benetton B194 with Ford V8 engine was exactly tailored for him. For Verstappen and Lehto the car was difficult to drive. The car was perfect for Michael. A victory over strategy in Interlagos during the opening race showed that Benetton could be a serious candidate for the title. The problems for competitor Senna grew in Japan. On the Okayama circuit, Mika Hakkinen hit the Williams from behind, Senna spun and got hit by Nicola Larini in his side. Senna looked from the other side of the track and continued to watch the B194 for a long time. He returned to the pits and claimed that the car being driven by Michael was illegal. On arriving at Imola, Senna realized that his fight with Michael only started in Europe. He had fourteen races instead of sixteen to become champion. He was also twenty points behind Michael. But what happened there in Imola is known to everyone. The reaction of Michael thereafter was labelled as ignorance, particularly by the British press, who say Michael celebrated his victory too exaggeratedly. During the Grand Prix of Monaco he won his fourth race in succession. In Spain he was second behind Damon Hill with a broken gearbox. Michael won again in Canada and France. His lead after the French Grand Prix was 37 points on Hill, his pursuer in the battle for the title.

Controversy at Benetton and a world title

The British Grand Prix at Silverstone was the turnaround in the championship fight. Knowing that Michael had achieved 66 points up to that point and would eventually become champion with 92 points, it meant that he only gained 26 points in the second part of the season. The main reason for this meager number was the race at Silverstone. During the warm-up lap, Schumacher, who qualified second, decided to pass Hill. This would eventually hand him a time penalty of five seconds. Schumacher did not follow the instructions of race control and got the black flag. There was a lot of talk on the pit wall between Benetton and race officials, Schumacher was eventually given a five second stop and go penalty and finished second. During the hearing at the World Motorsport Council, it was decided (on appeal) that Michael would be suspended for two races and he had to sit out the races at Monza and Estoril. His second place at Silverstone and his victory at Spa Francorchamps were taken away which suddenly cost him sixteen points. Hill won all races that Schumacher did not start or was disqualified. Having scored 40 points in four races and the battle in the championship was suddenly completely open. At the start of the European Grand Prix at Jerez, the difference was only 1 point in favour of Michael.

At the Japanese Grand Prix, Hill won in the rain, arguably his best race ever. Michael was second and with the second place that Hill had scored on Jerez, the gap remained the same. The deciding race took place at the Australian Grand Prix on the Adelaide street circuit. Michael showed on Friday that the pressure was on as he crashed heavily at the exit of the first corner. Nigel Mansell, who replaced David Coulthard Coulthard, fought to pole position. At the start, Michael and Hill took off. Hill stayed a short distance from Michael throughout the race. After the pit stops they were level, Hill was quicker and catching Michael, until the latter made a mistake in the 36th lap. Hill saw his chance and drove his Williams between Michael's car and the wall. What happened next can be viewed from two sides. Some people lost all respect for Michael from that moment on, and the other side thinks it's a race accident. Contact was made, and both drivers were out of the race. Michael had won his first championship.

The world title was achieved in Adelaide, but the critics were not tender. The English press in particular spoke highly critically about what Michael had done. But the Germans had their first world champion with him. This victory was celebrated exuberantly in his hometown Kerpen. After the season Benetton decided to switch to the Renault engines. This was partly because Briatore had taken over the Ligier team and because of this he was the owner of the strong Renault engines. There were several strange incidents in 1994. For example, several wrong petrol samples were discovered many times at Benetton, there was the tank incident with Verstappen in Germany, but it had not been proved that the car was not illegal. People were having problems with suspicions of espionage several times. None of these suspicions has ever become concrete. However the world title remains in the statistics. Without all the punishments, Michael could have secured the title well in advance. Despite the fact that opinions are divided, his first world title was arguably justified. He drove as the best driver that season and scored the most points.

In our fourth part we look at his second world title and the start of his Ferrari years.