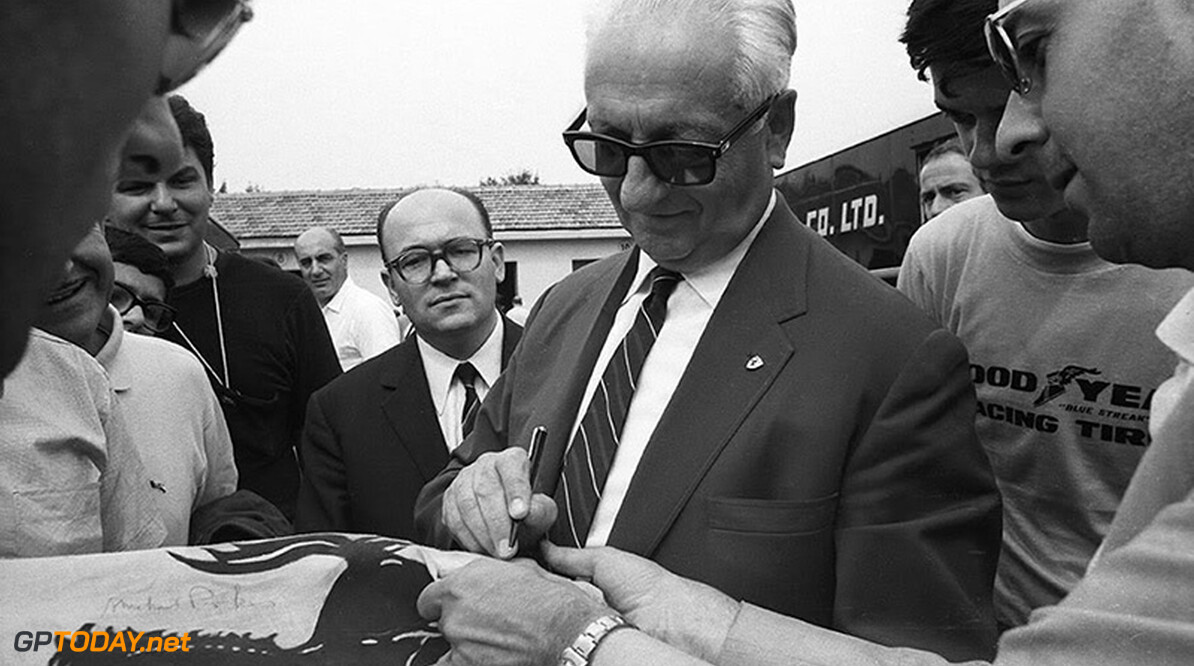 History: Ferrari and the Great Walkout of 1961

Ferrari's history is a mix of spectacular highs, dark lows and controversies that fit in between the two. Ferrari's controversies are everything but boring though. Whoever reads a book about the life of Enzo Ferrari can't deny that it would do just right as a Hollywood script. Therefor it is about time that we pop open the Pinot Grigio, turn on Nino Rota's soundtrack of The Godfather, and seat ourselves in a comfy chair to read a story in which all the elements of an excellent Italian opera are present. It is about love, women, betrayal, comradery, and Ferrari's. Lots of Ferrari's. This week we'll be looking at Ferrari's Great Walkout of 1961 that saw Enzo's most profound engineers, like technical director Carlo Chiti and head of design Giotto Bizzarrini, leave Ferrari after a dispute regarding the unwelcome presence of Enzo's wife, Laura. The ever growing aggravation among his top engineers resulted in a dispute between them and Enzo which started to come to the fore in the late 1950's. However, in a short burst of optimism, the Ferrari employees forgot that one does not simply present an ultimatum to Il Commendatore. Still applied today: if you don't agree with how things are being run at Ferrari, you may take your services and get out. The same message that Ferruccio Lamborghini and the staff of the Ford Motor Company were faced with.

Laura Dominica Garello (1923-1978) was Enzo's wife and mother of Dino Ferrari. Dino tragically died in 1956. His death was huge blow to Enzo, and slowly but surely he started to isolate himself from the factory and the Scuderia. While he locked himself up in his office at Modena, Laura started to patrol the premises of the factory and involved herself more and more in the general management of the Scuderia. It might well be that the death of Dino and Enzo's alleged love affair with another women made her a bit more like Enzo himself: a tyrannical figure. Sales manager Girolamo Gardini was Lauro’s most picked on target, and he had to endure many verbal violence. Gardini got fed up with these never ending discussions and, in 1961, turned to Enzo with an ultimatum: either Laura backs off from terrorizing the production team, or Gardini would leave the company. Unsurprisingly, Gardini had to pack his bags and leave the factory through the backdoor to go find himself a new employer. However, Il Commendatore did not expect Gardini's firing to create a huge backlash. After hearing the news, Chiti, Bizzarrini, Scuderia Ferrari team manager Tavoni, and five others called in the help of a lawyer with whom they formulated a letter in which they opposed Enzo's decision to fire Gardini. This was a remarkable situation because no one dared to oppose Enzo like that before, hence the name 'The Great Walkout'. Eight of the most influential engineers who made Ferrari the team to beat on the racetracks in both Formula One and GT-racing, took to the streets against Enzo’s tyrannical behavior. This came at a critical point in Ferrari’s history as they were about to get a heavy beating by Ford, Lotus, Jaguar and Shelby. Some predicted the end of the Scuderia.

Between the late 1950's and up until the end of the 1960's, Enzo Ferrari lost as many as seven drivers, driving his cars. In the Vatican newspaper, Enzo Ferrari was more than once compared to the Italian god Saturn, who devoured his own sons to keep his position as mighty god unchallenged. This Roman myth was depicted in a quite gruesome painting by the Spanish painter Francisco Goya between 1819 and 1823. I suggest you to look it up after dinner time. Alberto Ascari died during a test session on the circuit of Monza. Allfonso de Portage died in the tragic crash of the 1957 Mile Miglia in which his co-driver and ten bystanders also lost their lives. In 1958 Luigi Musso died on the circuit of Reims while, in the same year, Peter Collins lost his life in a crash on the Nürburgring. Wolfgang von Trips’ fatal crash at Monza, 1961 was the most deadly of Formula One crashes, as he took fifteen bystanders with him. Six year later, Lorenzo Bandini had his fatal crash in the streets of Monte Carlo. Fatal accidents were by no means a rare occurrence; it was simply part of being a race driver in that era. However, the large amount of fatalities under Enzo's watch were simply too high for people to let go unnoticed, and Enzo ended up with this image of him walking over the bodies of his own people in search of success. Working against him was the Italian law. Every fatal accident in a race event on Italian grounds is to be legally treated as a murder case. The constructor of the car involved in the crash is, when proven, to be accused of murder. The loss of his 'sons' weakened the position of Il Commendatore and his company.

Back to 1961. The lawyer who was representing Chiti, Bizzarrini, Tavoni and five others handed over the letter to Enzo. What happened next is still not entirely clear. Different media talk about Enzo simply firing the mentioned employees, while other media talk about a joint decision to put an end to the aforementioned services. However, former Dutch Formula One-journalist Rob Wiedenhoff portrays the sacking of the employees as something straight out of a mafia-film. According to Wiedenhoff, all managers were assembled as usual for the weekly staff-meetings in Enzo's office. During that meeting, Enzo didn't speak a word about the letter from the group of eight, and carried on with the normal weekly agenda. Wiedenhoff tells us that Tavoni remembered the meeting being unusually short, no more than 45 minutes. When they left the meeting, Enzo's secretary took the eight men apart and handed them a small envelop. The envelop contained one month's pay in cash. The secretary then pointed the eight men to the door and kindly asked them to leave, never to come back again. Enzo quietly went to work to find himself a new group of engineers. The timing of the Walkout was bad. Carlo Chiti just finished designing the world championship winning shark-nose F1-car. With Lotus breathing down in their neck, losing his championship winning engineer was a huge blow. Meanwhile, strong competition from Jaguar and the Shelby Cobra in the GT-league meant that Bizzarrini just started working on what might be Ferraris most beautiful car, the 250 GTO. This car was halfway through development when he left. Enzo’s biggest problem, however, was the fact that Chiti, Bizzarrini and Tavoni made plans to create their own Formula One team to beat Ferrari on its own sacred ground: Formula One.

Tavoni's Formula One team was going to drive under the name ATS (Automobili Turismo e Sport), which was going to be sponsored by a very wealthy Venetian aristocrat. Count Giovanni Volpi still believed that he could bring Venice back to its former position as one of the most powerful trade cities of the 16th and 17th century. In the early 1960's, Volpi started his own racing team, Scuderia Serenissima. His father, count Guiseppe Volpi di Misurata (someone who did many, many things. One of them was creating the Venice Film Festival), left his son a fortune to inherit. Giovanni loved motor racing and became a regular costumer for Enzo Ferrari's products. Among many other, Giovanni owned the iconic 250 GTO SWB ‘breadvan’. Because of the Great Walkout, Volpi took his chance to bring a group of talented engineers to his own Scuderia Serennisima by sponsoring Chiti, Tavoni and Bizzarini in creating ATS. ATS started work on three projects: an F1-car, a GT-prototype and a regular road going GT. Chiti and Tavoni made their debut with their V8 powered ATS-100 at the Dutch Grand Prix of 1963. The car was hideous. The nose was extremely low and small while the higher mounted engine was covered with pieces of the tubular chassis and some bodywork. The tubular frame was fabricated without much thought behind it. After installing the engine, more tubes were to be added which made it impossible to change the engine or gearbox without having to cut through the chassis! Phill Hill and Giancarlo Baghetti drove their ATS’s without any success. In Italy they realized an 11th and a 15th place, but failed to bring the car home in Belgium, Holland, Mexico and the U.S. They pulled out the plug after this hugely disappointing season, never to be seen again.

Ferrari survived the revolution. Enzo hired, together with a couple of others, Mauro Forghieri and Sergio Scaglietti. Scaglietti finished the 250 GTO and designed beautiful Ferrari body's for years to come. Forghieri became Ferrari's technical director and led the development of the 312 series that became highly successful in the GT- and prototype- endurance racing, while its F1 cousin –the 158-  won the world championship in 1964 with John Surtees behind the wheel. During his active years at Ferrari, Forghieri took eight constructers titles. Enzo Ferrari did not succumb to the challenges with which he was faced in the early 1960’s. He went through a lot, but never cracked.