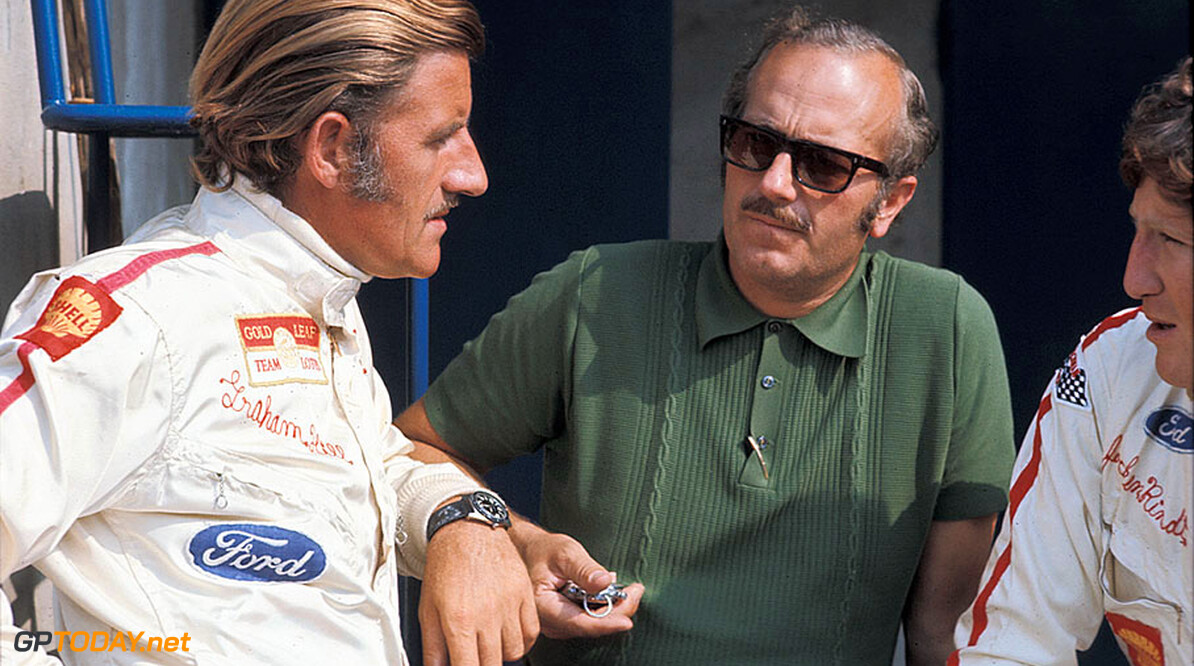 These last couple of weeks the Lotus Formula One team has been watched closely by journalists around the world, following their ever deteriorating financial situation. Overdue payments to second and third parties mean that the Enstone personnel have to join the buffet at the Formula One Paddock Club for a hot meal. And there is more. Kimi Räikkönen had to reach for his savings due to the absence of payments back in 2012. Charles Pic successfully won a lawsuit, allegedly winning him €800.000, and there are even stories of overdue payments to Toyota and the Bell helmet manufacturer. How is it possible that a professional business with an outsourced accountancy can sink so low? This week, we will be looking for an answer to this by looking at the colourful history of Lotus. Mostly because no one can be blamed for the financial disputes. Why? Because it's in Lotus' nature to be financially tricking their way through a season. It's a talent that the team adopted after drawing the Lotus emblem on their cars since 2012. For Lotus, it's like second nature ever since the dawn of Team Lotus, when it entered the Monaco Grand Prix in 1958.

'If one of my rear tires overtakes me, I know I’m in a Lotus'

First things first. Of course the current Lotus F1 team has little to do with the historic Team Lotus. The latter drove under this banner from 1958 up and till 1994. The current Lotus F1 team started out in 2012 after it took over from Renault (2002-2011), an organisation that started out as Toleman in 1981 and turned into Benetton in 1986. Yet, the spirit of Colin Chapman is more widespread than that legal matter! They who name themselves 'Lotus' will have to endure the legacy that comes with it. And that legacy comes in the shape of financial juggling. That is what made Lotus. Sometimes when you look into history, all you can see is the success. And that is more than obvious in the case of Lotus. It was never a team of well-oiled processes, never highly disciplined (more like devotional). This team, under the leadership of Colin Chapman, searched for the boundaries of what was technically possible, frequently crossing it, which is why it lacked reliability. But they dominated, because they had the guts to try whatever was needed to dominate. At a cost. Jackie Stewart swore never to drive a Lotus again after the driveshaft snapped in half during an unofficial grand prix. Stirling Moss' career was terminated after his Lotus curled around a tree, a similar accident would kill Jim Clark six years later. Innes Ireland rarely drove without technical problems, which made him lose his job. As Graham Hill once put it: "If one of my rear tires overtakes me, I know I'm in a Lotus." On a night, when Chapman was flown home in the company jet, the pilot opted for a detour due to heavy winds. Chapman, tired of continuous meetings, relieved the pilot of his function and landed the plane, through the storm, himself. That pretty much sums up how things went down at Lotus.

The Lunatic Fringe: a group of radicals or fanatics that exist in a wider social sphere that follow a certain political or cultural beliefs, for Chapman a niche market. According to Chapman, the Lunatic Fringe is a pool of motorsports enthusiasts that keep a continuous interest in his products, because of their love for racing. This pool will never dry up due to the introduction of new generations into the sport. It is this belief Chapman uses when someone comments on the fact that the reliability issues of his cars derive from the use of a few cheap components. For high performance, stunning looks and great handling, one has got to deal with a few minor shortcomings. Everything was done to create the lightest of chassis'. His revolutionary spaceframe setup was light, but he managed to make it lighter by narrowing the welds. The result of which was a broken-in-half Lotus of Stirling Moss on the Monaco GP start grid. They welded it back together on the spot. Saving money became a hobby. They took quite a bit of food from restaurants; first class plane tickets (offered by sponsors) were swapped for economy class ones and the difference was put in their own pocket. Hotel rooms were shared by at least two people, and most of the time the crew shared their pay checks. Sharing a hotel room was difficult enough for Chapman, who shared one with Jim Clark most of the time. Clark quite often met a nice girl with whom he wanted to share his room. During the week of the Indy 500, he got under the sheets with an American who asked if that man next to them wouldn’t wake up: "Don’t worry about him - the silly bugger never wakes up!" Chapman didn't get any sleep.

Lotus Engineering Ltd. was founded by Colin Chapman and Colin Dare in 1952. The company was reformed into the Lotus Group of Companies in 1959, consisting out of Team Lotus (the F1 team), Lotus Cars Limited and Lotus Components Limited. The latter two focussed on the commercial aspect of the company: production sports cars. These came in a kit, specifically for track-day drivers. By selling them as kits, they are able to dodge the VAT. This of course, comes as no surprise. Chapman, as long as he lived, stood at the top of the Lotus Group and used that position to impose his Lunatic Fringe strategy on both the production car end of the business, as the F1 team. Because of this the Lotus HQ in Hethel, Norfolk brewed with activity. From his office, the charismatic Chapman ordered his staff to go out and sell the old and used cars to generate a bit of money for his Formula One operations. Peter Warr, employee at Lotus, remembers: "This [the used cars standing abandoned] triggered his mind to conjure up a list of all the old and obsolete cars on the balance sheet at that moment; they offended his sense of tidiness not to mention the cash he could see tied up." Peter Warr obliged and went to work for Chapman who had to leave the HQ for a business trip to the US. When he returned, so ordered Chapman, the cars had to be gone or else he would chop them up. Warr quickly found a buyer who was willing to buy the whole lot at a good price. When Chapman returned, his reaction stunned Warr: "'You've done what?' he exploded. Well, get on the phone and tell him it was all a big mistake and get the cars back.'" When doing so, the original buyer sued Chapman, costing Lotus more money in lawsuits than they earned with selling the cars. Again, hardly surprising.

In the early days of Formula One, teams often drove under the banner of their country of origin. Rivalling car manufacturers were often backed by the nation’s support. This resulted in the simple, one or two tone liveries most of the teams used. Rosso Corsa by Italy, blue by the French and Racing Green for the Brits. Until 1968, large and exclusive commercial sponsorships were not allowed in Formula One since the circus was being supported by the giant car industrial companies like Shell, Firestone and British Petroleum. Teams were allowed to make use of sponsors from 1968 onwards. With the commercialization of motorsports (mostly because of the live broadcasting), the F1 started to become the biggest advertisement for the big companies. Chapman wouldn't live up to his name if he wasn't the first to engage. During the Grand Prix of Germany at the Hockenheim circuit in 1968, Jim Clark's last race, Lotus arrived at the track with a gold and red car, advertising for Imperial Tobacco’s Golden Leaf cigarettes. Personally, the Lotus 'Golden Leaf' 49B is the prettiest F1 car ever made. Seeing footage of Graham Hill steering that Lotus through the streets of the ’69 Monaco Grand Prix is absolutely breath-taking. Sponsorships made sure that more financial support was reaching the teams, which for Lotus meant that they got a little bit of room to move around. More so than they did in the 60's. Peter Warr takes it even further by stating that the investors invested in the wrong part of the Lotus Group after Chapman's death. You see, Team Lotus was a popular brand that got sponsored heavily and actually generated more money than it spend on developing the car. The investors took over the production part of the Lotus Group, that was renowned for heaving financial difficulties more than once. So much that the F1 team had to bail out the company a few times. However, after Chapman's death the Lotus team remained a private team, and that is how we know Lotus.

Hope for the future

Okay, it must be said that Chapman’s spirit in the financial juggling at the current Lotus F1 team is not a reason for it to be having financial difficulties as I stated in the beginning of this piece. The team might have been constantly broke during the 60's, it wasn't driven by big money at the time. However, not that much different from the typical Lotus ethic, the current situation requires Lotus to think smart about their future spendings. At the end of this though, stands a team that has been hit by financial troubles, meaning that a lot of hardworking people see their livelihoods being threatened, which is a situation neither one of us want to see us in. Let's hope that the guys from Enstone can continue their excellent work in the future. However, if Lotus is tied up in their own mismanagement, and they have no idea what to do, let them think of their spiritual father and his passion to make his cars as light as his wallet. Passion drives the sport.