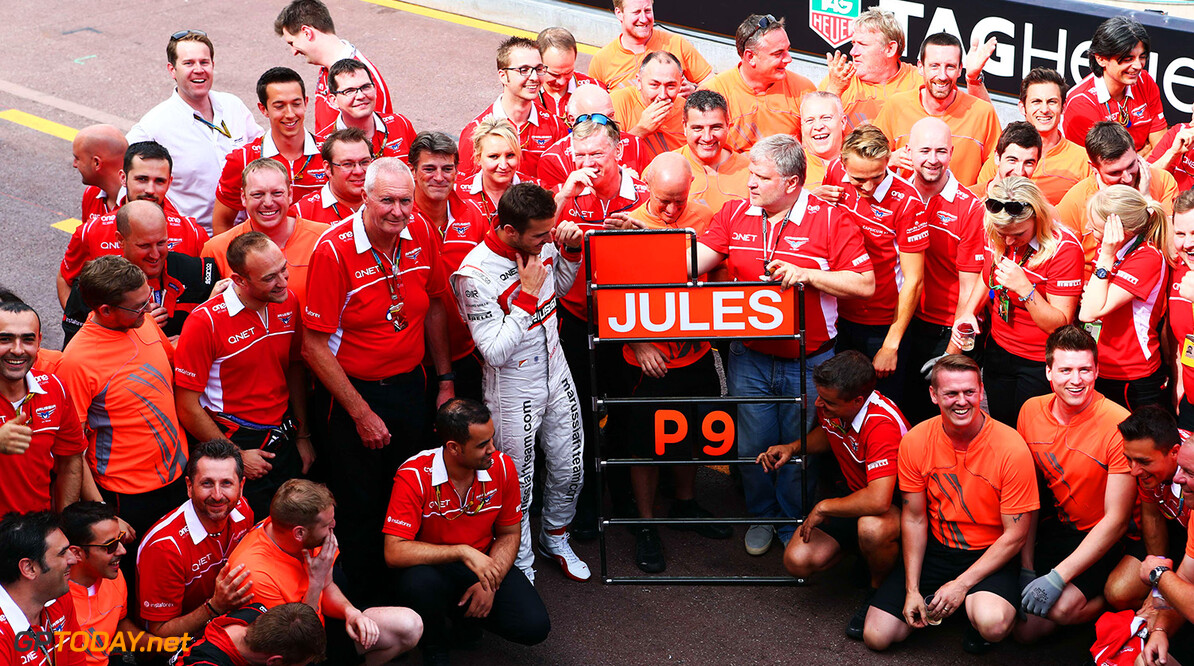 As Jules Bianchi lies critically ill in a Japanese hospital, grave questions are being asked about the circumstances surrounding his terrifying collision with a recovery vehicle on Sunday. Alain Prost, the F1 legend and quadruple world champion, told Europe 1 radio it is clear "serious misconduct" took place as the light faded and the rain intensified towards the end of the typhoon-affected Japanese grand prix.

"There was an error, that is clear," said the Frenchman. "Whose? I still have doubts. Was it the direction of the race or the officials who were at the corner?" FOM, the Bernie Ecclestone-run company controlling the sport's commercial rights, has suppressed the release of any official video footage of the crash. "I saw images that I will never forget," Adrian Sutil, who was at the scene as Bianchi struck the vehicle, is quoted by Switzerland's Blick newspaper.

Late on Monday, terrifying amateur footage of the incident emerged, although FOM has been working busily to have copies quickly removed from social media sites. 20minutes.fr claims the video was shot by Phillip Dabrowiecki, a spectator in the grandstands. "FOM has not contacted me, but I think they are trying to bury the video because it shows all the mistakes," he said. "I shared the video for the truth to be shown to all F1 fans."

One of the thousands to watch the video is Prost himself, who said he was alarmed to see that a marshal right next to the incident was waving a green flag. "It should have been at least a hundred metres away," he insisted.

Indeed, the green flag being waved from the marshal tower just after the incident scene is causing a great deal of controversy after the amateur footage emerged. But former driver Emanuele Pirro, who also serves as a driver steward for the FIA, says that it is "perfectly regular" for green flags to be waving at the very next marshal post after a caution zone -- even if this is just a metre away. He told Autosprint that those who say otherwise are "mistaken".

Nonetheless, British newspapers report that the FIA and Bernie Ecclestone have ordered an urgent investigation into the circumstances of Bianchi's life-threatening crash. The FIA confirmed that, and Ecclestone told The Times: "Things happen and we have to find out the cause."

Former FIA president Max Mosley described Sunday's events as a "freak accident". "I can't really fault any of the people involved, the marshals or the race director or any of those people," he is quoted by Britain's Sky. "For some reason the driver didn't see the yellow flags. It would appear he didn't slow down as perhaps he should have done, but it's certainly the case that the yellow flags were deployed."

Others also think it was simply a tragic accident. Red Bull's Dr Helmut Marko told Servus TV on Monday that there was "no specific reason why driving was impossible" at the time of the crash. Williams driver Valtteri Bottas also played down concerns about the fading light, telling Auto Motor und Sport that he could "see the flags and there was also the flashing light" in his cockpit.

The driver steward on duty at Suzuka was Mika Salo, and he suggested that Bianchi was simply driving too quickly in the yellow flag zone. "No car should go out of control in that situation," he is quoted by the Finnish broadcaster MTV3. "I saw everything. There was way too much momentum."

Salo also backed Charlie Whiting's decision not to bring out the safety car. "It was the right decision," he said. "At the corner was a single accident, the driver (Adrian Sutil) did not need help so there was no need to release the safety car. This was a standard situation."

Salo also played down claims the race should have been stopped for the intensifying rain. "Some of the drivers had switched again to heavy rain tyres, but some were staying on worn intermediates," he said.

Red Bull's Marko described what happened as "a chain of very, very unfortunate circumstances". "After the safety car start, it was then a normal wet race," said the Austrian. "When the accident happened, Sebastian (Vettel) did not request extreme wet tyres so it was justified for the race to go to the end," Marko added.

Derek Warwick, another former driver and sometime FIA steward, told the Guardian: "Let's not get too carried away, it was a one-off. "You will always have these extraordinary situations and we have to be careful not to make kneejerk responses to them," he told the Guardian.

Warwick said one kneejerk response would be a rule change that every time a recovery vehicle is on track, the safety car should be deployed. "But I think it's better to let people like Charlie and his team make the decision. Will he get it right every time? Probably not, but my vote will always be for the professionals to make the decision at the time," he added.

This is precisely where opinions are starkly and emotionally split up and down the paddock. Galvao Bueno, the influential lead commentator for Brazil's Globo, described Sunday at Suzuka as "the biggest mistake I've seen in 40 years in formula one". "I have no fear of speaking despite having a very good personal relationship with Charlie Whiting," he insisted.

"This was a race that had no condition to be run. I spoke with Felipe Massa and he said he saw nothing -- if it looks dark on TV it's because it's dark as hell. This could have been avoided." FIA president Jean Todt will attend this weekend's Russian grand prix.
F1 News Valtteri Bottas Felipe Massa Williams
<< Previous article Next article >>
.