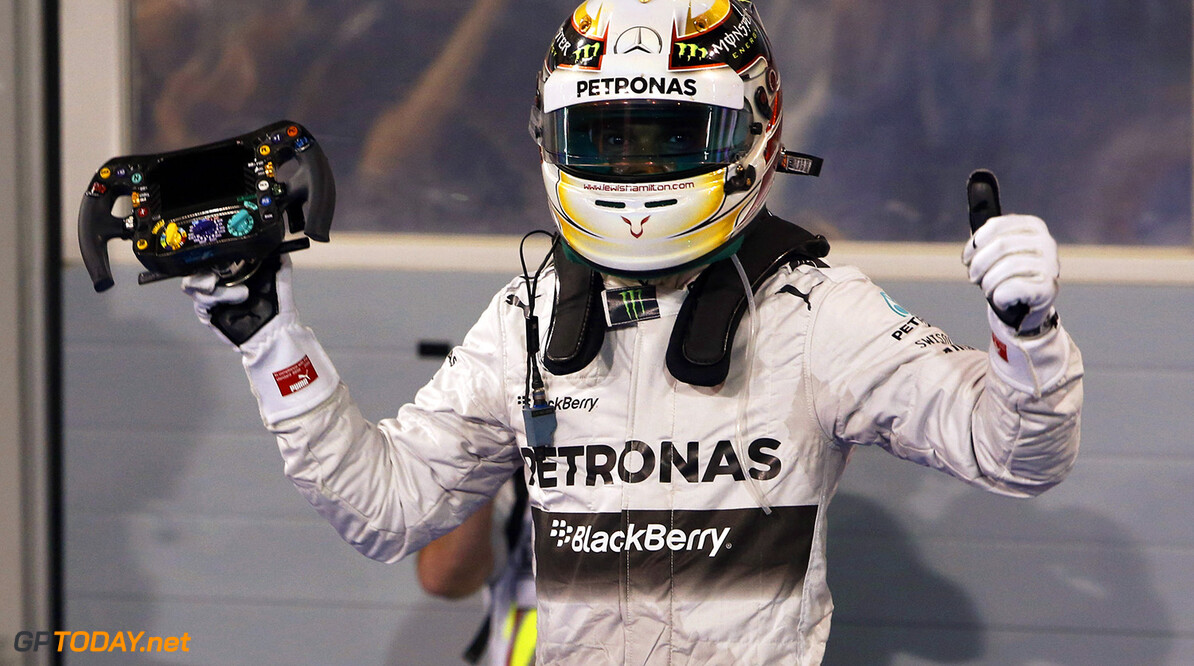 The rain from FP3 continued to fall for Qualifying, resulting in a session that would be held in Wet conditions with the likes of Red Bull being tipped to do well after Ricciardo was on top during the last session.

Before Q1 even began it became apparent that the Lotus of Pastor Maldonado would not being going out during the session after his Lotus was sat in the garage looking little more than a rolling body shell, an engine oil leak was to blame.

It was the two Marussia's who lined up at the end of the pit-lane with Gutierrez in the Sauber behind them before the trio headed out onto the track for the start of the 18 minute session. A smattering of drivers followed them with Rosberg and Kobayashi both having minor off-track excursions during their installation laps.

The first timed lap was set by a Marussia with a 2.01.3, it was quickly bettered by Kvyat and then Rosberg's Mercedes by some 5 seconds after the German set a 1.56.351. Hamilton slotted into 2nd with 10 minutes remaining, Alonso in 3rd who was followed by Vettel who made a minor mistake Ricciardo was 4th, Vettel 5th, Bottas 6th, Magnussen 7th, Hulkenberg 8th, Massa 9th and Raikkonen 10th.

With 6 minutes remaining it became apparent that some drivers were willing to take a gamble on Intermediate tyres after the two Caterham's became the guinea pigs earlier on in the session. Kvyat, Vergne, Sutil, Gutierrez and Bianchi all switched over to the tyre, with the latter almost setting a laptime that would have been good enough for Q2, however the Frenchman ran wide at the final turn.

Sutil, who was currently 17th jumped up to 11th which triggered a change from the Force India's, however the timing was too late for most teams who had to run the Wet tyre after not having enough time to make a tyre change. Kvyat and Vergne moved up to 12th and 16th respectively and Gutierrez lost out to Romain Grosjean after failing to make it out of Q1.

Raikkonen was on the backfoot towards the end with the Finn struggling to improve his laptime, he eventually finished the session in 13th. The drivers who failed to make it into Q2 in ascending order were Gutierrez, Kobayashi, Bianchi, Ericsson, Chilton and Maldonado. Hamilton topped the session after setting a fast lap late on, demonstrating the dominant pace of the Mercedes once more.

Q2 got underway with Sutil in the Sauber being the first driver out on track, all drivers were now opting for the green-marked Intermediate tyre. Following him out was Rosberg, Alonso and Grosjean.

It became apparent that the track was just as slippery as in Q1 with drivers fighting the rear of the car most of the way round the track due to the high amounts of torque going through the rear wheels. Sutil set the first timed lap of a 1.58.188 that was quickly bettered by Hamilton, Rosberg, Alonso and Grosjean.

A flurry of drivers crossed the line with the majority of times being around the mid-to-late 1.50's mark. It looked likely that it would be a case of the last man over-the-line to determine which drivers would make it through to the final Q3 session.

With 5 minutes remaining it was still Hamilton on top, followed by Vettel, Rosberg, Ricciardo and Alonso. Most drivers decided to dive into the pit-lane for a new set of tyres to have one final run to improve their times.

The current drop-zone with just over a minute remaining was Magnussen, Sutil, Vergne, Hulkenberg, Massa and Perez.

All drivers bar Hulkenberg and Massa struggled to improve their laptimes, with the first two making it into Q3 which meant that drivers out in Q2 were Raikkonen, Button, Kvyat, Sutil, Magnussen and Perez. The reason behind the lack of improvement was thought to be an increase in rain intensity.

Although, Raikkonen appeared to be blocked by Massa in the dying moments on one of his fast laps to which the Finn was clearly frustrated. It is thought that an investigation by the stewards would be launched.

Q3 got underway and it became clear that it would be difficult to choose the correct tyre due to the harder rain fall. Vettel was first out on the Intermediate, as was Rosberg. However, Ricciardo decided to go for a set of full Wets.

Persistent light rain was expected for the session which meant that the first timed laps were expected to be the fastest of the session.

Vettel set the pace that was quickly bettered by Hamilton who was 0.6 seconds faster with 1.54.348. Rosberg was 3rd, Ricciardo 4th, Alonso 5th, Massa 6th, Bottas 7th, Vergne 8th and Hulkenberg 9th. Grosjean was yet to set a timed lap.

With 5 minutes remaining, all drivers on track darted into the pitlane for a set of Intermediate tyres which appeared to be the best for the conditions.

Two minutes remained and Rosberg quickly looked to improve his lap, however a mistrake going into the hairpin after the back-straight put paid to that. Hamilton then extended his lead over the field by 0.4 seconds, meaning that he had a second over Ricciardo who had improved in time.

Rosberg then made another mistake and spun coming out of the final turn meaning that the German would line up in 4th position. Vettel didn't improve and stayed in 3rd, Alonso 5th, Bottas 6th, Hulkenberg 7th, Vergne 8th, Massa 9th and Grosjean some 3 seconds back in 10th place.

Our coverage of the Chinese Grand Prix will continue tomorrow with Race Reports and News as it happens.