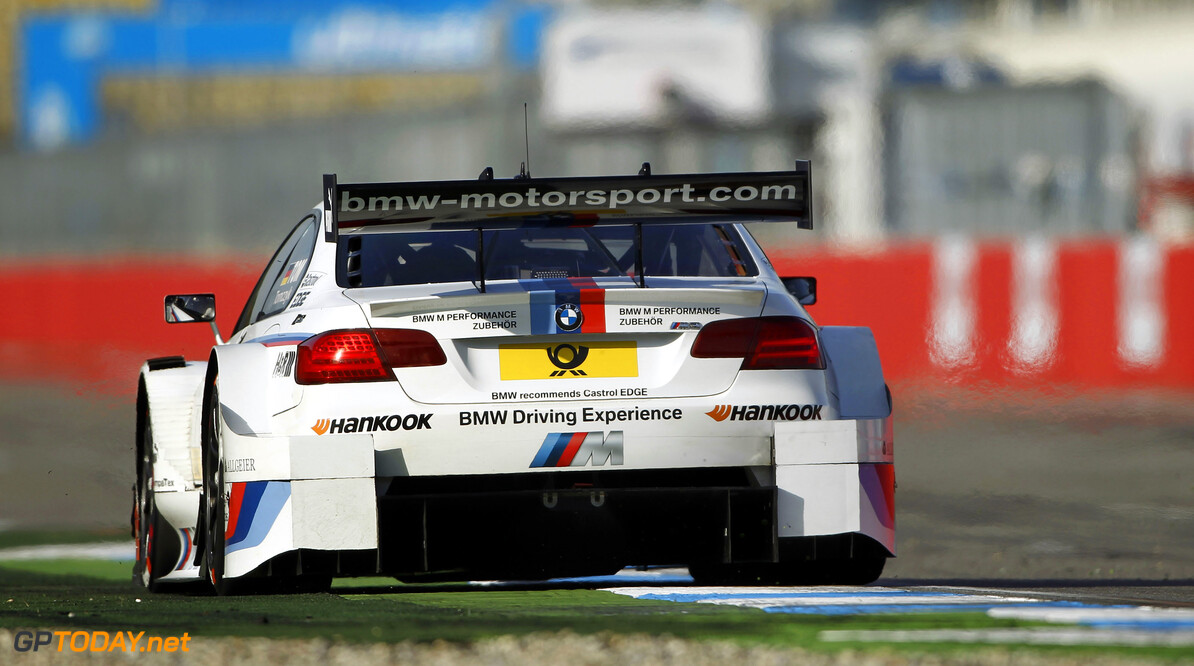 DTM enters the 2013 season with new drivers and innovations

A little bit less than four weeks prior to the DTM season opener, the DTM presented itself to the media at the occasion of the start of the second and final ITR test at the Hockenheimring Baden-Württemberg. In a press conference, the ITR e.V. as the DTMs rights-holder and promoter and the three manufacturers Audi, BMW and Mercedes-Benz presented its new drivers, technical innovations and new regulations.

In particular, the option tyres from series' partner Hankook and the Drag Reduction System (DRS) will add to the excitement in the DTM. Both novelties are to enhance overtaking opportunities for the 22 drivers in the field and to allow for more variety in the race strategy. Further changes in the regulations: in the fourth and final qualifying heat, the use of fresh tyres is now allowed. Moreover, teams have to determine and announce the tyres for the start of the race after qualifying. In the race, the time window for the two mandatory pit stops has been abandoned. Only in the first three laps and the three final laps of the race, no car is allowed to enter the pits for the mandatory tyre changes.

Four drivers are making their DTM debut this season. Ex-Formula 1 driver Timo Glock and Marco Wittmann are racing for BMW, Daniel Juncadella and Pascal Wehrlein for Mercedes-Benz. Audi is relying on last year's line-up and has added ex-Mercedes-Benz driver Jamie Green. The DTM calendar for 2013 includes ten rounds, six of them taking place in Germany and four in other European countries. The round at the Moscow Raceway on August 4th, the maiden DTM race in Russia, marks a premiere.

At Hockenheim, teams are testing their cars unfil Friday, also working on the fine-tuning for the season opener on May 5th, also at the Hockenheimring Baden-Württemberg.

Quotes from the press conference:

Hans Werner Aufrecht (chairman of the board, ITR e.V.): "In the past ten years, I have never felt so well in the DTM as I do now. The new regulations that came into force for 2012 were successful, its goals have been achieved. The title for BMW as a new entrant made this more than clear. Of course, we continue working on reducing costs and to still make the DTM races more exciting. Together with the DMSB and the manufacturers, we again have achieved a variety of measures, like the option tyres and DRS. Formula 1 has shown, how well these measures can work. The first tests in the DTM also have proven it."

Dr. Wolfgang Ullrich, head of motorsport Audi: "Of course, we weren't happy with last year. The DTM has a very high level and in 2012, we didn't get the optimum out of it. For the second season with the new regulations, it is our clear goal to be in contention for victories again. We have got Jamie Green on board to finally win at the Norisring. This seemed the best possibility for us to do so Our DTM team for this year is the strongest line-up we have ever had. It is a mix of young and experienced drivers."

Jens Marquardt, BMW Motorsport director: "Our first year in the DTM was good, perhaps even too good. All three titles that were at stake, went to Munich. Of course, as the defending champions, we are in the best role. But surely, our colleagues from Audi and Mercedes-Benz have also been working hard and will make life very difficult for us. I am really looking forward to the task ahead. When I heard the engines again this morning, it was a great feeling. We are happy that Timo Glock and Marco Wittmann are back in the BMW family again. All in all, we have a very balanced line-up."

Toto Wolff, head of motorsport Mercedes-Benz: "Other than in the past, statistics aren't really my thing. In fact, I don't even know who the current champion is Our preparation has been very good and intense. Our line-up has been reduced by two drivers to a total of six and, above all, rejuvenated. The line-up is young and courageous. With 18-year old Pascal Wehrlein, we have the youngest driver in the entire field. Gary Paffett is our spearhead."

DTM champion Bruno Spengler (BMW): "I have had many commitments since I won the title. That was quite thrilling and above all made the long winter go by a little bit quicker. 2012 was a sensational season, a dream year. But now, we have to get our feet back on the ground and fully concentrate on defending the title. We want to win as many races as possible, and then we will see whether that is enough. The task will he difficult, because all the cars in the field are able to win DTM races."

Timo Scheider (Audi): "For me, 2012 was an absolutely catastrophic season. As a two times' DTM champion, of course, it is my ambition to score podium results on a regular basis again. That has to be my goal and it will be a major challenge. I am really looking forward to the duties ahead."

Timo Glock (BMW): "The transition from Formula 1 to the DTM is quite big. Initially, I didn't even know how to get into or out of a DTM car. I still have to learn a lot and gain experience. The car is much fun to drive and I am looking forward to the start of the season."

Pascal Wehrlein (Mercedes-Benz): "Realistic expectations for me are difficult, because I have spent little time in the car so far. I will learn a lot and get as much experience as possible. Of course, I want to score points as often as possible."

Christian Schacht (secretary general, DMSB): "The DTM is very innovative and we have a lot of things to do as a result. Both DRS and the option tyres have proven to be working well during the tests. Safety is very important for us, so there are technical features included into the DRS to make the wing snap back in order to ensure optimum traction."

Manfred Sandbichler (Director Motorsport Europe, Hankook): "Early last season, Hans Werner Aufrecht already came to Hankook with the idea of an option tyre. Since then, we have been developing and testing and we are delighted with the positive feedback from those in charge and from the teams. For three to four laps, the tyre allows for lap times that are approximately one second faster than the regular race tyre. Then, it drops considerably. That was required and was turned into reality, to increase focus on the overtaking manoeuvres."
DTM News Pascal Wehrlein Marco Wittmann Mercedes
<< Previous article Next article >>
.