Column: The challenge that faces Carlos Sainz at Ferrari

After six years as a Formula 1 driver, Carlos Sainz has found himself signed to a race winning team – to Ferrari nonetheless, the most famous and historically-proud racing outfit of all.

For onlookers, the Ferrari driver situation has unfolded in just a matter of days, making the process an unusually quick one. Sebastian Vettel will leave the team, taking with him any uncertainty as to who Ferrari’s number one driver will be going forward.

Sainz has come aboard the Maranello ship and will partner Leclerc, who is tied down to a long-term deal until at least the end of the 2024 campaign.

The career path for Sainz is one that many have dreamed of. Having built up plenty of experience in F1, but still having the essence of youth on his side, the Spaniard has time to fulfil his fantasy of becoming a world champion in F1.

To achieve that, he must overcome the test of Leclerc, who looks to be on a momentum-filled road to success. Following successive GP3 and Formula 2 championships, an impressive year at Sauber in 2018 saw him climb to Ferrari last year, where he got his first win out of the way, and calmed any doubts over his qualifying pace.

With Leclerc being Ferrari’s homegrown talent, the focus going forward will almost certainly be on the Monegasque racer – something that Sainz will have to contend with as part of his new team. 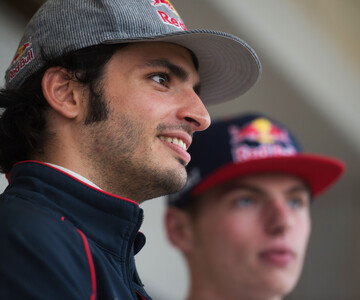 It is not the first time that Sainz has had to partner a highly acclaimed driver. From 2015 to the 2016 Russian Grand Prix, he raced alongside Max Verstappen. Verstappen may have moulded himself into a stronger driver now compared to his Toro Rosso days, however the raw speed didn’t go unnoticed during his opening races in the sport.

Following his move to Renault, he drove alongside Nico Hulkenberg, who at the time was Renault’s clear lead driver. Although it’s generally accepted that Hulkenberg had a stronger season, Sainz’s performances grasped the attention of McLaren.

It was the Woking-based team that decided Sainz was the driver worthy of replacing Fernando Alonso in F1, and with his new teammate in Lando Norris being a rookie, expectations were high as McLaren looked to bounce back from a difficult 2018 campaign.

Sainz’s consistent performances in an ever-improving MCL34 car saw him finish sixth in the drivers’ championship last year, helped by his first ever F1 podium in Brazil.

The season only boosted his reputation further and now he takes arguably the biggest step of his career as he leaps into a race seat that has been occupied by some of the greatest drivers the sport has ever seen.

2019 that it can be too much, but fortunately for him, he had a Toro Rosso cushion to fall onto following his demotion from Red Bull.

Sainz will undoubtedly be targeting race wins and podiums from the get-go and should a situation arise where he and Leclerc are fighting it out, will Ferrari intervene? Will they move to calm relations and signal their support for a clear number one driver?

He has the experience over Leclerc, at least in F1 overall, but perhaps not at Ferrari and fighting at the front of the grid. And does he have the speed and the consistency needed to be considered one of the best in the sport? The drought of championships that Ferrari is currently enduring gets more painful for the Tifosi as each year slips by. They are thirsty for success - as are the youngsters of Leclerc and Sainz.

With the deal being two years, it will ease some pressure on Sainz's shoulders – little as that lift may be, when you’re driving for Ferrari.