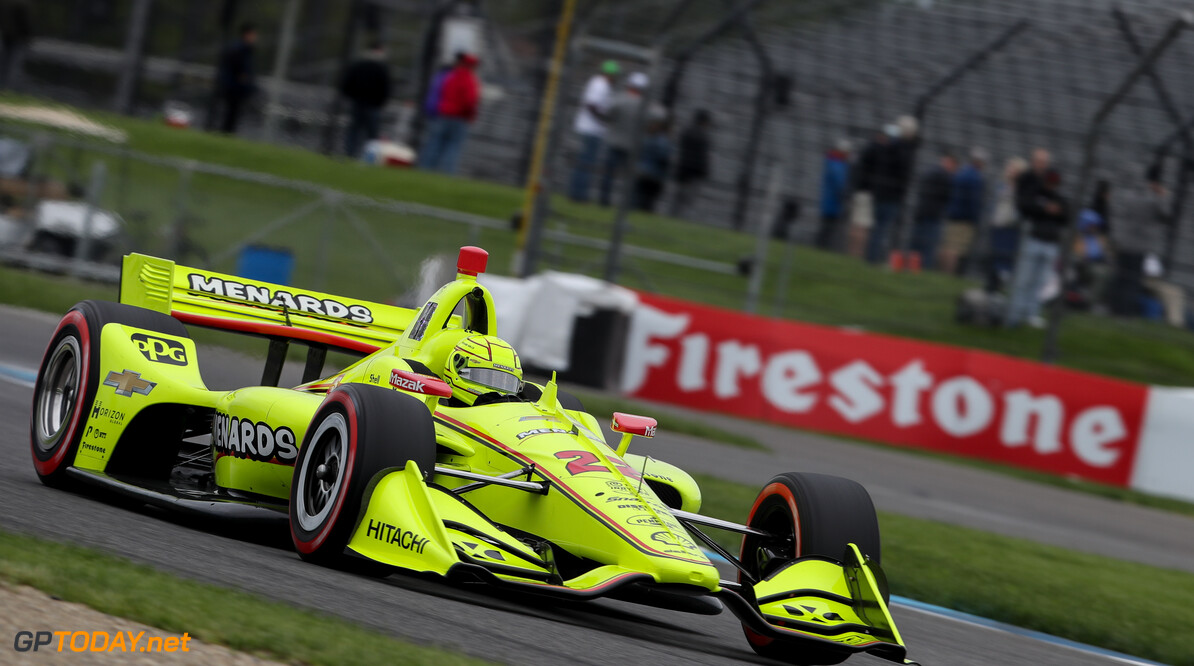 Simon Pagenaud has won the IndyCar Grand Prix after passing Scott Dixon on the final laps of the race.

The event was hit by rain that increased as the session went on, with all drivers opting to switch to wet tyres for the final quarter of the race.

Pagenaud found himself in the lower reaches of the top ten when the race resumed with just under 20 laps to go, following a yellow that was caused after Helio Castroneves spun.

The Frenchman cut his way through the field, despite having much less push-to-pass than those around him.

After catching up to Dixon, the latter driver made a small mistake which allowed Pagenaud to get alongside and pass. He went on to take the win for Team Penske, who has struggled massively during the weekend.

The victory marks Pagenaud's first since the 2017 GoPro Grand Prix of Sonoma, and his first podium finish since the race at Toronto last year.

Scott Dixon held on to second, finishing ahead of Jack Harvey, who takes his first podium finish of his IndyCar career. Prior to the P3 result, Harvey's best result in 14 races has been P10.

Matheus Leist also starred for A.J. Foyt, who has struggled with pace so far this season. The Brazilian secured his first top ten finish, having made his debut in 2017, by crossing the line in P4.

It was a strong day for Ed Carpenter Racing, who got both of its cars inside the top six. Spencer Pigot was fifth, finishing one second ahead of teammate Ed Jones.

After running into major pace issues early on, Will Power recovered to finish in seventh, ahead of Felix Rosenqvist who started from pole position but encountered issues during the 85 laps.

There were two retirements from the race, the first of which was Marcus Ericsson. The Swede got loose at the final corner and spun, making contact with the wall.

On the restart, after Ericsson made it back to the pits, Colton Herta was spun around after making contact with Harvey and subsequently retired, while Ryan Hunter-Reay and James Hinchcliffe came together. Hinchcliffe was handed a drive-through penalty for the incident.

Patricio O'Ward was also delivered a drive-through penalty after he hit the rear of Alexander Rossi right at the start of the race when the green flag was shown.

Rossi sustained heavy damage and pitted for repairs, but couldn't do anything to turn his day around.

Josef Newgarden was also on for a strong result before a wheel got away from his pit crew during his final stop. His penalty was to drop to the rear of the field before the final restart, and he crossed the finish line in P15.