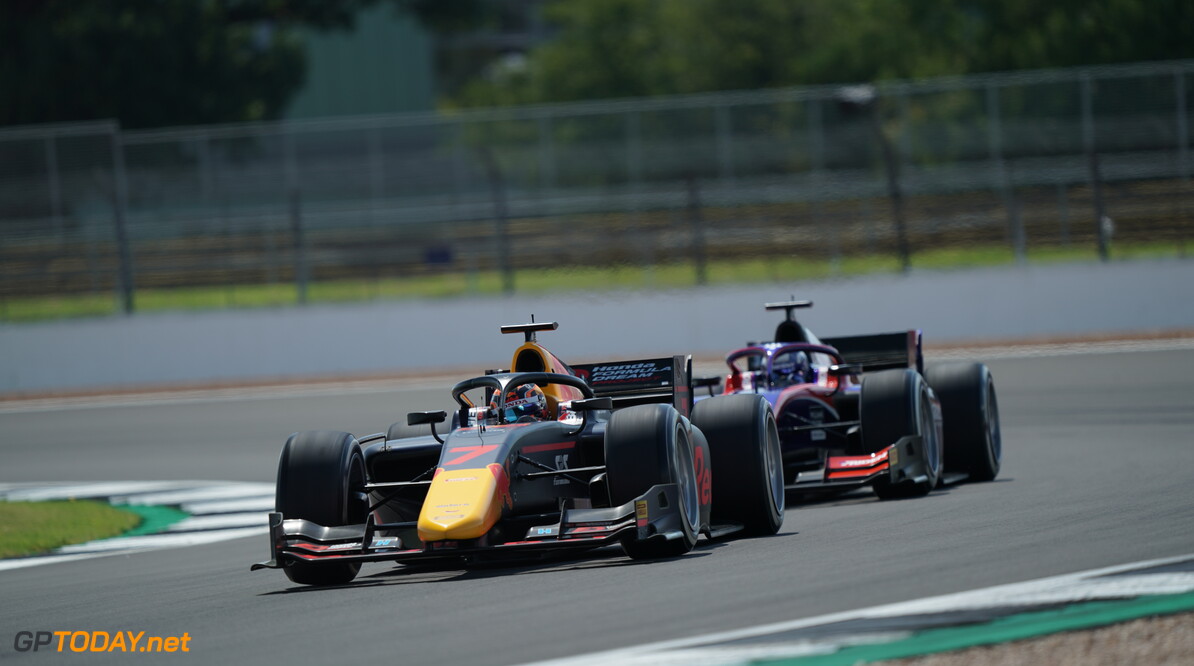 Carlin's Yuki Tsunoda took the win in Silverstone this after a late collision between the Premas of Mick Schumacher and Robert Shwartzman.

Schumacher would eventually finish second, while Shwartzman dropped out of the points with front wing damage. Jack Aitken would take the final podium spot in third.

It was an all Prema front row as championship contender Shwartzman led from Schumacher, as Aitken jumped up to fourth on the start.

Christan Lundgaard had a good start, moving to fourth before Aiken retained the position. Schumacher lunged at Shwartzman into Chapel but could make nothing of the move.

Pedro Piquet had a high-speed spin after contact with Roy Nissany, briefly bringing out the yellow flags, however he kept the engine going and he was able to continue

Schumacher almost spun coming through Brooklands and while he saved the slide and return to the circuit, the Prema was now two seconds behind Shwartzman.

Lundgaard complained early on with rear tyre degradation. Lundgaard would go off the circuit exiting Copse, giving up his fourth place to Louis Deletraz.

Yesterday's race winner Callum Ilott made contact with Nikita Mazepin was the pair squabbled over eighth, as Lundgaard went further down the order as Guanyu Zhou went side by side with the Dane through Maggotts and Becketts to take sixth.

Fourth and fifth went to Deletraz and Zhou while championship leader Ilott took sixth ahead of fellow countryman DanTicktum.

Schumacher and Tsunoda started to close up on Shwartzman as the Russian complained of his rear tyres. Schumacher also began to struggle with six laps to go.

Lundgaard suffered a similar fate as saw in last weekend's F1 race with a front-left tyre puncture forcing him down the order and out of the points.

Schumacher closed down on his teammate, eying victory as the pair crossed the line to start lap 19. Tsunoda also closed up on the pair and took the lead after the two Prema cars made contact at Brooklands, breaking Shwartzman's front wing.

Shwartzman opted to keep going despite the damage for the final few laps, being passed by Aitken for third and eventually out of the points. Tsunoda pulled away from a recovering Schumacher and took the victory at Silverstone.

Eighth and the final point went to Mazepin, as Jehan Daruvala and Luca Ghiotto rounded out the top ten.