Lewis Hamilton has expressed disappointment over comments on racism made by Formula 1 world champions Mario Andretti and Jackie Stewart.

In recent weeks, Hamilton has expressed his desire to see racial equality, with F1 pushing to implement more diversity within the sport going forward.

A Task Force has been set up to listen to voices in the paddock on how to make changes so that people who are underrepresented have more of a chance of having a career in F1.

Hamilton has pledged to set up 'The Hamilton Commission' which aims to improve diversity in STEM (Science, Technology, Engineering and Mathematics) subjects.

MORE: Hamilton: F1 has to do a better job with equality messages

Speaking on Good Morning Britain recently, Sir Jackie Stewart said of Hamilton's activism: “I think Lewis has been a great example to lots of people. He's quite vocal about these elements, I don't think there's as big a problem as there might seem.

“There is no resistance for change if someone is clever and good at what they do. They will be accepted in Formula 1. 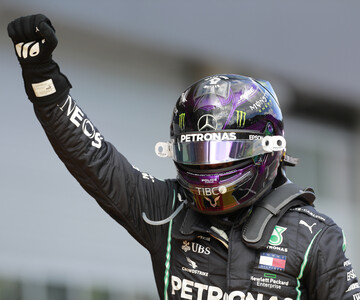 “What we need to do is be sure whatever colour, man or women, they have to be educated in that particular area of engineering and if we had different races wanting to get into Formula 1 they have to do it through education.”

Andretti also questioned Hamilton's motives, claiming the six-time world champion was creating a problem around a situation that doesn't exist.

“There's a time and a place to express your opinions,” Andretti said. “What happened in NASCAR with Bubba Wallace became bigger than it should be.

“What seemed to be a terrible situation was finally not. It was disproportionate and without reason. That happens when you think about politics before anything else.

“It's the same thing. I have a lot of respect for Lewis, but why become a militant? He's always been accepted and he's earned everyone's respect. I think the whole point of this is pretentious. I feel that way. And it's creating a problem that doesn't exist.”

Taking to Instagram, Hamilton responded to the quotes from Andretti and Stewart.

“This is disappointing but unfortunately a reality that some of the older generation who still have a voice today cannot get out of their own way and acknowledge there is a problem,” he wrote.

“Again, this is plain ignorance but that will not stop me from continuing to push for change. It is never too late to learn and I hope that this man who I've always had respect for can take the time to educate himself.”

Following up with a screenshot which showed an article regarding Stewart's comments, Hamilton said: “Again, another one. Just disappointing.”