After two difficult years competing at the rear of the Formula 1 grid, 2020 has seen Williams turn a corner, with its trajectory appearing to be on the up at the start of the new decade.

2019 was not kind to the Grove-based squad, as its only point of the year came amid a chaotic race in Germany that saw many top contenders drop out or make costly mistakes.

Aside from the grand prix at Hockenheim, it never looked close to competing for points. Saturdays saw it consistently lock out the final row of the grid, with qualifying over for the team in just 18 bleak minutes.

However, after the opening three rounds of the 2020 season, two of those events have seen Williams progress into Q2, with both George Russell and Nicholas Latifi advancing into the second stage last time out in Hungary.

Williams worked tirelessly throughout 2019 to make gains, doing so without having a technical director in place following the departure of Paddy Lowe before the season had even got underway. 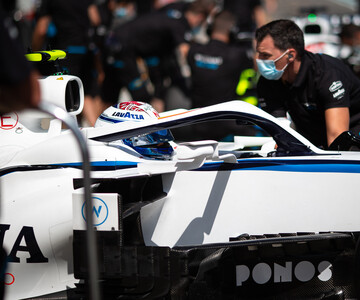 Earlier this year, Williams signed Simon Roberts from McLaren as it looked to bolster its squad and steer away from the “traditional” team structure of having one person at the helm of the design and development department.

It also secured the signature of David Worner from Red Bull's organisation, who acts as a chief designer alongside a fellow newcomer in Jonathan Carter, Worner's deputy.

Speaking to the F1 Nation podcast, Williams' deputy team principal Claire Williams affirmed that not having a technical director in place is “a conscious decision”, stating she thinks the team doesn't “need to continue with a traditional organisational model”.

She continued: “It hasn't worked in the past so try something new, right? If you keep doing the same thing and expecting a different result, that's lunacy.

“We've got a managing director now in Simon Roberts, who comes to us from a great career at McLaren as their Chief Operating Officer. He's an F1 aficionado through and through. He knows his stuff and he's putting the technical side with the operational side. We think that he will be able to do really great things and drive the team forward.”

Williams says that key changes that have led to an improvement on the track not only stems from bringing in new personnel, but also by promoting and reorganising from within.

“Obviously, with all the other restructuring work we've been doing, it's been a huge amount,” she said. “We talked about all of last year, restructuring our aero department, restructuring the design office, bringing a planning function, reorganising our manufacturing capabilities and bring in new people across all of these areas, that's all finally coming together.

“I feel now we have all the right people in the right places. The team is organised in the right way and now it's about letting them run and do their thing and getting on with it, moving us forward.” 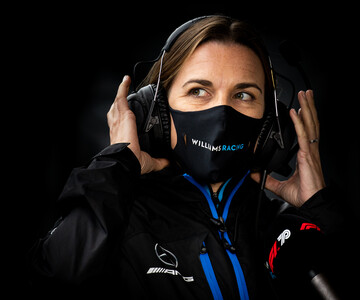 gathered at pre-season testing earlier this year. However, she emits no surprise, as she understands the capabilities of her employees.

“It's always really difficult to understand exactly where you are before you get your car to a race track,” she said. “You can spend as much time working in CFD, working in the tunnel, getting the numbers from both and then taking the car and putting it in the simulator.

“Even at pre-season in Barcelona, I thought from all of those results, and we probably all thought, that we were probably further back that we proved we are in these races. There are a number of circumstances that may have contributed to that stronger pace that we've got.

“I wouldn't say we're surprised. I know what people are capable of at Williams, they've worked incredibly hard. Surely after all that work you deserve some kind of pay off.”

The feeling of being competitive was almost lost on Williams, after it was forced to watch itself run almost exclusively at the back of the grid.

But the fire of adrenaline has sparked back into life, despite there being some clear issues that Williams needs to mend, especially regarding its long-run pace during grands prix.

“We did promise we were going to delivering improved performance this year and I'm so pleased that we've managed to deliver on that promise, it was very important to us,” Williams said.

“The excitement is back, the adrenaline is back, sitting there watching your cars go out knowing they can do something other than come last in quail and come last in the race. You kind of quickly forget after two years what that does feel like.

“I just feel we can hold our heads up a little bit higher because it's never nice when you're down. To have to try to keep holding your head up is difficult, but we have aways done that. Now it feels like we did it, we told you we were going to.”