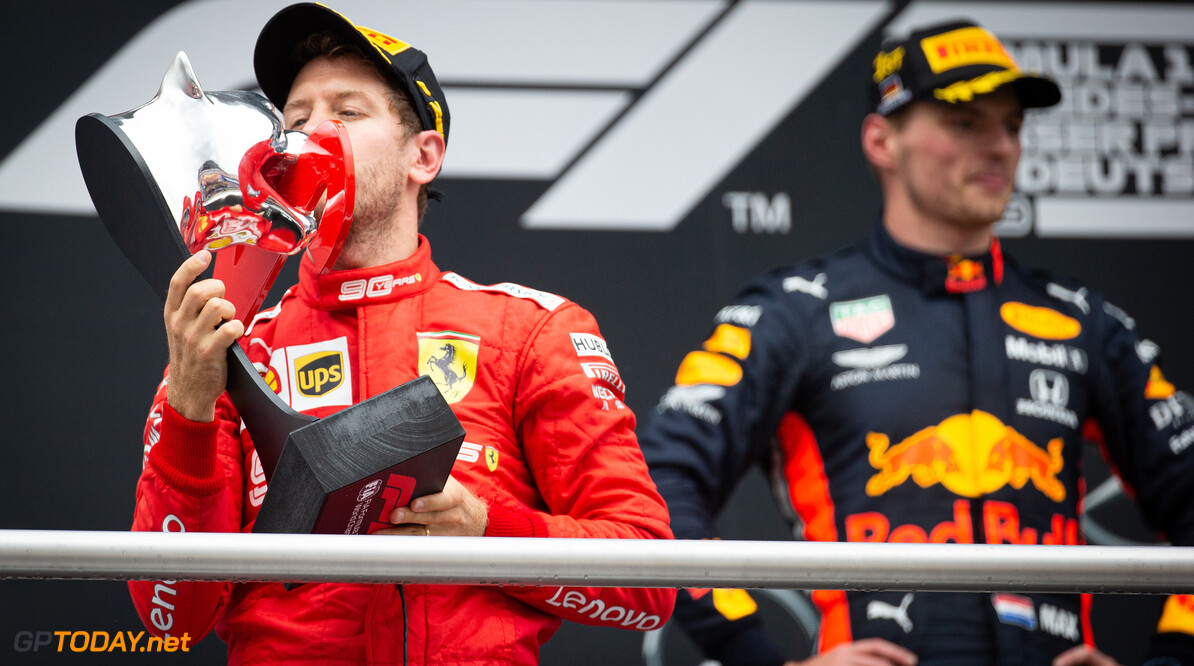 It was yet another flawless performance for Verstappen, as the Dutchman showed his skill in changeable conditions. Even after a slow start where he suffered from a lot of wheelspin, he recovered the positions that were lost relatively quickly and continued to show Red Bull what a valuable asset he is to them.

If there was ever a weekend where Vettel needed to perform, it was this one. He came into his home race weekend off the back of two disappointing results in Austria and Great Britain, with people starting to question his future at the Scuderia. The German was yet again unlucky in qualifying with an intercooler fault preventing any timed laps from being set, but he performed a good recovery drive to finish second in a hectic race.

I don't think many would have believed you if you'd said that there would be a Toro Rosso on the podium, but thanks to an excellent strategy by Toro Rosso and a stellar drive by Kvyat it gave the team only their second ever top-three finish. The Russian, who became a father for the first time on Saturday evening, pulled off some great overtakes to show why he was brought back into the team after a year on the sidelines.

On Saturday, Stroll finally managed to end his streak of exiting in the first part of qualifying, and this was a sign of good things to come. Before the final safety car the Canadian was down in 14th, and it looked unlikely that he would even be able to score a point. However, thanks to an amazing strategy call, he was propelled up the field and even lead the race for a brief moment. After good defending against Bottas and Sainz, he came home in an impressive fouth place for Racing Point - technically the team's best-ever result.

After a good qualifying, Sainz had a very eventful race. The Spaniard seemingly spent more time off the circuit that on it during the opening laps. He then went into a spin at the final corner early on in the race, which put him behind his teammate in 15th. However, a strong drive in the second half of the race and good strategy calls from McLaren meant that he managed to come across the line in fifth.

You would imagine that the nerves were quite high for Albon at the start of the race, as he had never driven a Formula 1 car in the wet until this race. However, the Anglo-Thai driver dealt with the pressure extremely well and after starting from 16th looked to be in contention for his first podium finish. Although this did not come to fruition after losing out at the final pitstops, Albon made a great move on Pierre Gasly in the Red Bull to score his best finish in Formula 1 to date.

Grosjean had a great qualifying, especially when you consider that he is driving the same car that he had in Australia. As Haas continue to try and understand what went wrong for them this season, the Frenchman contributed to a strong points haul for the American team after a dreadful British Grand Prix last time out.

Magnussen did not have the best qualifying, but was fortunate to gain some positions thanks to mistakes from others. He made a bit of a reckless move against his teammate Grosjean, where the pair collided. Luckily they both escaped without damage, but you know that team boss Guenther Steiner will not be happy after the incident at Silverstone just two weeks ago.

Hamilton had an impressive qualifying, especially given he felt unwell. However, it all fell apart for the Brit in the race as he had one of his worst performances in recent memory. After dominating the first stages of the race, the current world champion crashed at the final corner and lost his front wing. He then cut across the pit lane entrance, earning himself a five-second penalty. After a very long pitstop, another incident followed as he narrowly missed hitting the wall in the same place as his teammate Valtteri Bottas.

It seems that Kubica might finally be getting up to speed in his Williams car. The Pole was only a tenth behind his teammate George Russell in qualifying, and then was quite aggressive during the race to get past and stay ahead of the Brit. It is nice to see Williams get its first point of their 2019 campaign, even if it was awarded due to post-race penalties.

There wasn't much wrong with Russell's drive during the race, and he was unfortunate not to score points as his teammate did courtesy of the disqualification of Alfa Romeo. The rainy conditions in a Formula 1 car provided good experience for the Briton as he continues to grow as a driver.

Raikkonen drove an interesting race and could have been on for a top result if it wasn't for a costly mistake of running wide in the last sector, where many other drivers suffered. However, he recovered to score some good points, only to be penalised post-race as Alfa Romeo allegedly did not fall in line with the starting procedure.

Giovinazzi is warming into Formula 1 after a tough start to the season and like Raikkonen, was set to score points before being handed the penalty. Missing out on Q3 by extremely small margins, it was an unlucky weekend all round for the Italian. But he can nevertheless take encouragement as he looks to retain his seat for 2020.

After the confident boost at Silverstone, Gasly received the sharpest of backside kicks in Germany, starting off with his FP2 crash. Things looked much brighter after a respectable qualifying result, but in the race, the Frenchman failed to impress, dropping down to last place at one stage after making a mistake. A late-race collision with Alexander Albon capped off a miserable weekend for the 21-year-old as questions about his future continue to be asked.

Bottas' weekend failed to produce anything special, which may prove costly in the championship battle as teammate Lewis Hamilton scored a measly two points. His DNF was his first since Austria last year, and his third since he joined Mercedes.

Hulkenberg's weekend was looking so well until his self-inflicted crash. A podium could have been on the cards after he displayed strong pace in qualifying, but once again, the result slipped away from the German.

Leclerc suffered horrid luck in qualifying when he was looking extremely strong all through the weekend. He started his recovery nicely, but was one of many drivers who was caught out in the last sector and suffered a DNF, scoring zero points for himself and Ferrari.

Norris said after qualifying that it was the first time this year he had let his team down. The Briton dropped out in Q1 and then had problems during the race that saw him drop out of the running order.

Ricciardo lost out to teammate Hulkenberg in qualifying but was going nicely in the race before his engine gave up. In such a crazy race, there's no telling where he could have ended up - but unfortunately a DNF will leave that question unanswered.

Perez was the first to succumb to the tricky conditions early on the race after a good job in qualifying, leaving him to spectate the strong drive of teammate Stroll. Nevertheless, Perez can take encouragement from the team's upgrade that it brought to Hockenheim, which seemingly has stepped up its performance.