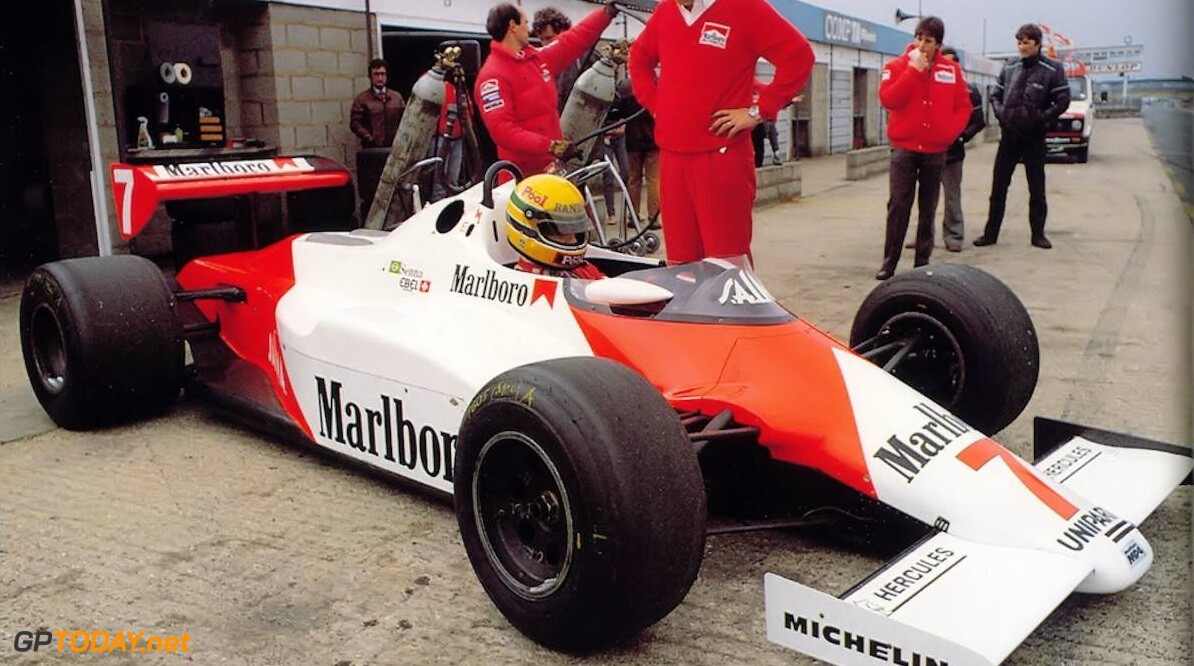 After his successful test with Williams in July 1983, Ayrton received several offers. The Brazilian would get the chance to test for McLaren after his British Formula 3 season, which happened at the end of October of 1983.

As part of the McLaren Young Drivers test Ayrton Senna, Martin Brundle and Stefan Bellof came to Silverstone. Today, McLaren also performs this test as as the winner of the McLaren Autosport Award will be offered a test in an older model Formula 1 car by the team from Woking.

Brundle and Senna were present because of their performance in the British Formula 3 Championship, while Stefan Bellof was seen by McLaren as the successor of John Watson. Watson would leave his career as a Grand Prix driver with McLaren at the end of 1983, as the Briton entered into negotiations with Brabham.

McLaren wanted to see how Bellof compared to the British Formula 3 drivers. After his first attempt in the McLaren MP4-1 Ford Cosworth, Senna was taken out of the car. According to the engineers, he was too fast. After returning to the track he drove the fastest lap of the day, 1:13.9.

Ayrton came back in the pits and complained about not feeling very comfortable in the cockpit. He thought he couldn't operate the accelerator as well as he wanted. Yet he felt good: "I felt quite comfortable with the car. The McLaren Ford is an easy to drive car. The speed at Silverstone is quite high, but I still have a good feeling about this car. The results were excellent, much better than I expected.

"I am now going to realise how you could win a Formula 1 race. In Formula 1 you are always dependent on the material you get, the driver can be a part of that. As long as you have a good car you can easily handle it. I am very satisfied with this test and it was really great to do."

In an interview, Ron Dennis explained the following: "So far everything is going well. Ayrton is constantly faster on these tyres than we have been in the past. I hope we can let him ride another session at the end of the day. Maybe it will be even better then.

A few laps in the Brabham-BMW

Bernie Ecclestone had also shown interest in the Brazilian. Ecclestone invited Senna for a test at the French circuit of Paul Ricard. The Brabham-BMW BT52B would be at the disposal of the Brazilian. This test was far from successful afterwards. The BT52B was still in development at that time and it seemed that Nelson Piquet, at that time the first driver at Brabham, had ordered the mechanics to sabotage the car. Piquet seemingly told these mechanics, with whom he had become champion, to adjust the car incorrectly. Ayrton turned out not to be able to record a respectable lap time.

At a later stage Bernie Ecclestone would have admitted that Nelson Piquet would have blocked the route from Ayrton to Brabham. Ayrton was prepared for negotiations, we mentioned this in our previous part. However, there turned out to be one factor that caused the deal between Ayrton and Brabham to be cancelled: the Main sponsor Parmalat made their desire for an Italian driver clear. It would stop sponsoring the Brabham team if there was no Italian driver in the car. This also explained why 'lesser' drivers like Pierluigi Martini and Mauro Baldi were allowed to participate in the test. Brabham eventually chose another Italian, Teo Fabi.

Test and a contract at Toleman

His last test in 1983 was with the Toleman team. Strangely enough the 'weakest' team of the four. Yet Ayrton felt right at home here. The test at Silverstone was memorable. While the Brazilian had a wet track in the morning, it cleared up in the afternoon. Ayrton lapped faster than Toleman driver Derek Warwick.

Ayrton's time of 1:11.500 would have earned him an eighth place on the grid at the 1983 British Grand Prix. Regulars Derek Warwick and Bruno Giacomelli didn't get further than a 1:12.538 (Warwick) and a 1:14.422 (Giacomelli) in July under better conditions and with more experience.

Senna had started in both the morning and afternoon session in a quiet way as he had learned from his McLaren test earlier that year at the same circuit. At the end of the morning session the Brazilian clocked a 1:12.040 even in humid conditions (almost dry track). That was already faster than Warwick's qualifying time. Toleman was very impressed. "To be honest, this is not a car to win races," Ayrton said after the test day. "This car doesn't have the capabilities of Ferrari, Renault or Brabham. But this car is definitely a potential podium candidate, maybe even next year."