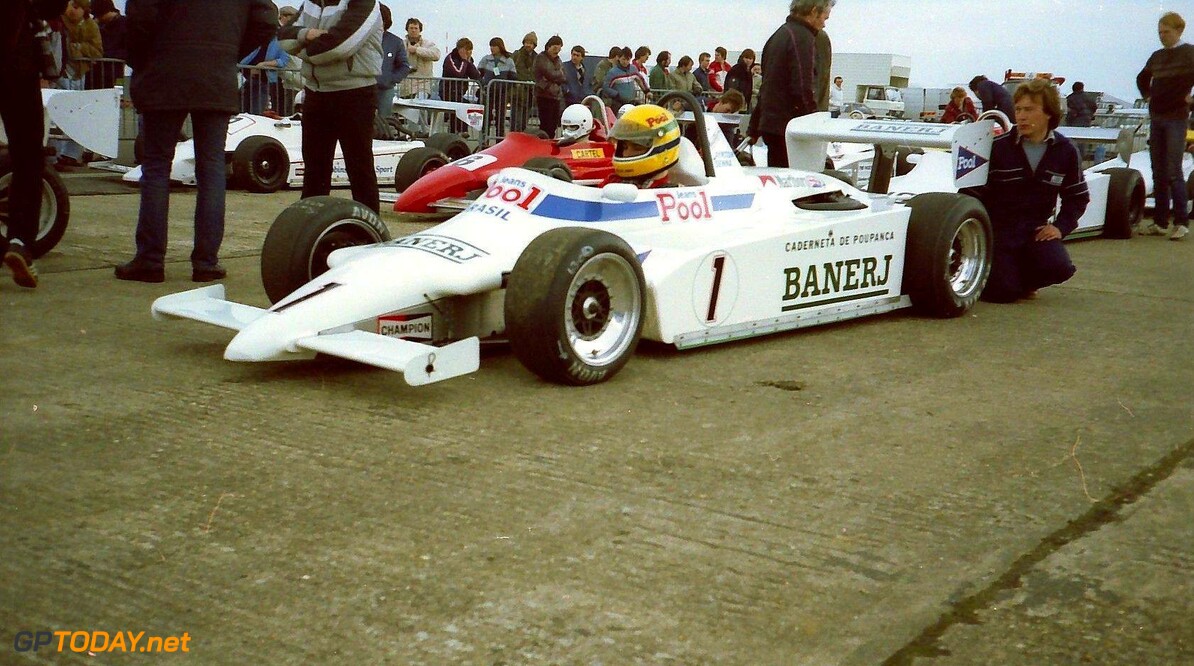 Ayrton had to recover after the bad rounds at Silverstone, Cadwell Park and Snetterton. During these three races, he scored no points. There was a rumour in the British media that Senna would be an 'all or nothing driver'. He was praised at the beginning of the year for his great domination and refinement. But from the race in Silverstone, the Brazilian was lost.

According to many insiders, this was due to the pressure he would have put on himself. The question eventually became: Could the Brazilian, with his many talents, win the 'hobby racer' Martin Brundle?

Complaints again about the British system

After the disappointment of Snetterton that we discussed in our previous part, Ayrton came out with the following statement: "Martin Brundle is a very good driver, he is really very good. He has the concentration, the rest and the charisma. A trait that Davy (Jones) and I also have.

"But, the way people around him deal with this situation is a joke. I am not at all happy with that. I personally have nothing against him. He is a competitor and for me he is the competition, we race against each other. I am sure that one of the stewards, in three cases, has taken sides with him. As far as I know, do not ask me how I know, he has repeatedly urged to have me punished."

Returning with two podiums and yet suffer a defeat

At the 13th race of the year at Silverstone, Ayrton was supreme. The West Surrey Racing Ralt was in top form during the summer edition of the Silverstone race. A pole position and victory was the best way for Senna to hit back.

The next race Ayrton was defeated by an unleashed Brundle. The race at Donington Park is, according to insiders, the best Formula 3 race the British Championship has ever had. In a direct battle for the title, Brundle passed Senna on the eighth lap.

Dick Bennetts had been with his pupil prior to the race and told him: "Ayrton, there is no shame in finishing second. With a second place and the fastest lap, Brundle can finish up to two points behind in the battle for the title. This is exactly what Ayrton would keep to at Donington on the 24th of July.

He knew that Brundle was faster that day and therefore chose the 'conservative way'. Finally the Brazilian showed that he could also ride with his wits. It was an important development for West Surrey Racing and Ayrton Senna. At least, that's what people thought...

The shame of Oulton Park

It is well known that there are statues of Senna and Brundle at Oulton Park. The Brazilian, at that moment second in the race, tried to overtake the Englishman with an all or nothing attempt. His attempt failed. The pressure was on Ayrton.

During a test session on Thursday at Brands Hatch, Ayrton crashed his car in Druids. The whole back of the car had to be rebuilt. Nevertheless, on Saturday he qualified as second, behind Brundle. After the first qualifying session, Ayrton said: "The car is very difficult to drive. Very dangerous. I could not drive the car at the limit.

During the second qualification there was already a moment between Senna and Brundle. Both went wheel-to-wheel all over the circuit. Many think that the tone had been set for what happened later that day. Brundle took the lead of the race ahead Ayrton.

Despite the fact that Martin had big problems with the brakes, he stayed ahead of Ayrton for most of the race. On the 28th lap Ayrton decided to place his attack. "I was behind him, exactly in his gearbox when I tried to out brake him at the Cascades. He probably never saw me coming. He entered while I was already sitting next to him and I drove over him," said Senna.

Both championship candidates were out of the race. The battle only intensified after this incident. Calvin Fish won the race, ahead of Davy Jones and Allen Berg. Ayrton finished one point at Brundle, which was due to the fastest lap.

The reviews afterwards were not tender. Murray Walker, who commentated the British Formula 3 championship races for the BBC at the time, said the following: "What Ayrton did there to Martin at Oulton Park is one of the most ridiculous things I have ever seen. Martin didn't want to let Senna pass. Martin stayed on his line and Ayrton came from nowhere next to him. Eventually he flew over Martin and landed on his car. It is a miracle that Martin Brundle survived this crash."

Brundle knew at that moment that the panic would set in in the Brazilian: "He had to understand that I would not go on the side. I was ready to fight hard with him. I was ready for an accident."

Dick Bennetts said: "I sat with him a few times and explained to Ayrton that he had to keep his peace. I thought he was an intelligent guy, that turned out not to be the case in these cases."

On his last legs to the title

The title would eventually come for Senna but that wasn't without a struggle. At Silverstone, he won the race and finished ahead Brundle. The positive test days prior to this race had helped the Brazilian.

"The car is almost perfect, I'm happy with it," he said. "The rest of the pack is getting closer and closer, I can't do more than I am doing now. I have to make sure I stay as the leading driver."

At a support race for the Austrian Grand Prix, Senna did not compete which a big blow to process. Sadly, Eddie Jordan Racing's truck, with its car in it, ended up in a ravine on the way back from the event. Brundle's good friend and mechanic Rob Bowden did not survive the accident. The car was wrecked. Via Ralt, Eddie Jordan Racing got a new car including a new engine.

This was built and used at the race in Silverstone. Eventually, the team of Senna, West Surrey Racing, would file a complaint because they thought that the car of Brundle had a low ride height. According to motorsport correspondent Simon Arron, everything was being done at that time to win the championship

"Good luck or bad luck, we had to fight with all possible means," he said.

Dick Bennetts could defend this accusation: "If you could get your feet under the car, it would mean you had the right ride height. If you couldn't, your car was too low. That was exactly what happened to Brundle's car. This is not about 'dirty play'. There are rules and they will have to be followed by everyone.

Ayrton eventually lost the lead in the championship at the 19th race, as Brundle took the lead. At that time it also became clear that Brundle and Eddie Jordan Racing had an update of the Toyota-Nova engine halfway through the season. Jordan said afterwards that this had nothing to do with performance.

It turned out to be so in the end. Ayrton, who spoke Italian, disassembled the engine from Ralt and drove to Italy. For a few days, the Brazilian was working to improve the engine. In the three weeks between the second last race at Silverstone and the final event at Thruxton, the Brazilian put all his time in this car.

In the end it turned out to be enough for the title. Senna won the race at Thruxton and had Davy Jones in second place as a buffer. Brundle finished third. The 123 points Brundle scored (he lost four because only a specific number of results were taken into account), were nine less than the Brazilian. Senna was champio and. Brundle would explain afterwards, at a later stage, that his duel with Senna made him reach Formula 1.

The 1983 championship produced a number of strong ood drivers who have achieved great results throughout their careers. Brundle became a Formula 1 driver and scored a total of nine podiums. He never won a Formula 1 race but won the Le Mans 24 Hours in 1990 and became world champion in Group C in the same year.

Davy Jones drove IndyCar and in 1996 he won the Le Mans 24 Hours with Alexander Wurz and Manuel Reuter in a Porsche WSC-96 by Tom Walkinshaw Racing. Jones is currently a member of the board of 24/7 Holdings LLC. He came second in the first Indianapolis 500 after the split in 1996. Calvin Fish became Formula Atlantic champion in 1987. He is currently active as a commentator and analyst for Fox Sport 1 where he reports on the IMSA Weathertech Sportscar Championship. Allen Berg drove for Osella-Alfa Romeo in Formula 1 in 1986.

He won the 1993 Mexican Formula 2 Championship. Berg currently has a racing school in Fontana California. As a racing instructor, Berg is involved in the development of young American drivers. Many of his students have now made the transition to motor racing.