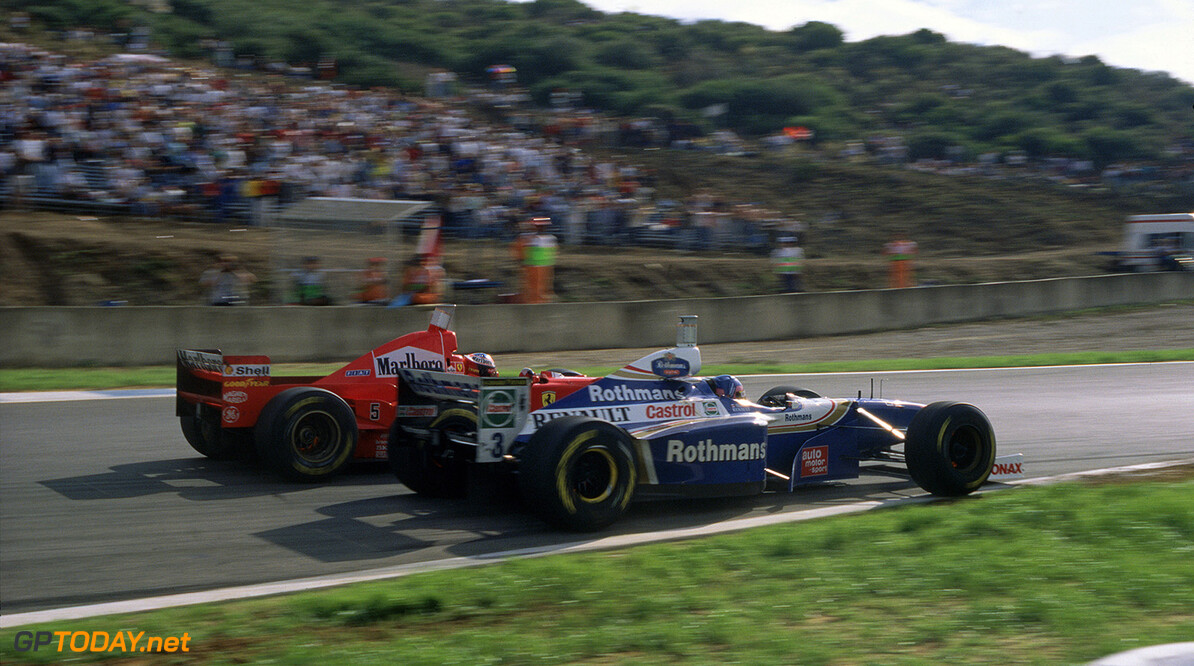 Michael Schumacher will turn 50 on Thursday, 3rd January 2019 which is reason for F1Today to look back through of the man who leads many of Formula 1's drivers' statistics. In the fourth edition - we look at his second title with Benetton, a surprising move to Ferrari, and the 1997 controversy at Jerez.

Claiming back to back titles in 1995

The Benetton B195 was fitted with a Renault engine for the1995 season. Ross Brawn and Rory Byrne were responsible for the design of the car. The car did not change much from the B194, only the rear was adjusted because the V8 from Ford has been replaced by the Renault RS7 V10. During the test at the beginning of the season it became clear that the B195 wasn't a much better car than they initially thought it would be. The car had major problems with the handling. This was confirmed by Gerhard Berger at the end of the year during the off-season winter test in Estoril. Berger and Alesi both drove in Michael's car and were not impressed with the how it handled. But Michael managed to become the world champion again. This time, he was a class better than his competitor Damon Hill. Where in 1994, Michael made mistakes in Silverstone, it was in 1995 Hill who went in the wrong direction. Hill crashed into Michael on two different occasions and both times it was Hill's mistake. Also, during the Belgian Grand Prix, which Michael had to start from the sixteenth place, Michael was supreme. In a direct battle with Hill, Michael showed that driving in the rain is his forte. Michael won his second world title on the Okayama circuit, while Benetton also became world champions in the manufacturers' fight. Teammate Johnny Herbert won two races, thanks to the accidents that Hill caused.

A surprise transfer to Ferrari

Contractually, Michael was at Benetton for 1996, but he decided to switch to Ferrari at the end of 1995. Michael tested after the last Grand Prix of the year for the first time in the Ferrari 412T that was driven in 1995 by Jean Alesi and Gerhard Berger. Michael was impressed. He considered the Ferrari V12 engine good enough to win the 1995 championship. Nevertheless, the development of Ferrari would be based on the development of a V10 engine. This was extensively tested in the winter of 1995 on the circuit of Estoril, Mugello and Fiorano. The development was set in a strong motion and Michael was able to drive a time that was almost two seconds faster than the times of Berger and Alesi during the winter tests in Estoril. But the Ferrari F310 suffered from reliability problems from the beginning of the season. In Melbourne and Buenos Aires, Michael retired with technical problems, but the car was reasonably fast, as Michael scored pole positions in San Marino and Monaco. During the Grand Prix of Monaco Michael made a mistake by crashing his car into the wall on the first lap. Two weeks later, during the Grand Prix of Spain, Michael scored his first victory for Ferrari. In an absolute masterclass, the German drove away from the rest of the field. It was reminiscent of the victory of Ayrton Senna in Estoril during the Portuguese Grand Prix of 1985. But the fact that it was again in Spain where he won a rain-hit race was not surprising. Since his entrance into Formula 1, Michael was always fast on the track, and especially in the rain, given his second place in 1992 behind Nigel Mansell. The victory came at a good time. Michael was suddenly seen as the title candidate, but an engine failure on Magny Cours and a hydraulic problem at Silverstone caused two point-less results. Still, Michael won two more races in 1996, on August 25th at Spa Francorchamps and  September 8th in Monza. The Italian Grand Prix at Monza was an emotional one for the Tifosi as they were waiting for the first home victory since 1988. Michael would close the championship in 1996 in third.

A great first half to the 1997 season

For 1997, the Ferrari F310 was further developed. It was Eddie Irvine who was responsible for ten thousand kilometres of testing at Fiorano. Michael, therefore, started the season full of expectations that Ferrari should bring its first world title since Jody Scheckter in 1979. Ferrari was also looking for the chance to become a constructor champion, that would mark its first time since 1983. Michael was on fire from the Grand Prix of Monaco. He won his first race of the season and took the lead in the championship from Jacques Villeneuve, and soon it became clear that the title fight would go between the German and the Canadian. After the French Grand Prix at Magny Cours, Michael had a fourteen-point lead over Villeneuve. At that time, a victory for a Grand Prix was worth ten points. After the Belgian Grand Prix, which Michael won for the fourth time in his career, the gap with Villeneuve had shrunk to eleven points. With five races to go, Ferrari was not competitive in the relatively high-speed circuits of Monza and the A1 Ring (nowadays Red Bull Ring). Michael finished twice in sixth and saw his lead shrink to the smallest possible margin. After an incident during the Grand Prix of Luxembourg, where he was hit out of the race by brother Ralf and Giancarlo Fisichella, Michael held a nine-point deficit, with two more races to go. There was a swing of 23 points that took place in seven races. The German no longer had the title in his own hands. Michael's hopes received a boost after Jacques Villeneuve was disqualified after the Japanese Grand Prix. Villeneuve had received a grid penalty for ignoring yellow flags during a practice session. Williams appealed the decision and started from pole position anyway.  Villeneuve ended up finishing in fifth place, while Michael won the race. Williams decided to drop the protest and Villeneuve lost his two points, which made Michael the championship leader with only the race in Jerez left.

The controversy at Jerez

During the qualifying session in Jerez, Schumacher, Villeneuve and Frentzen all drove the fastest lap time. Hill followed by less than a tenth in his Arrows. Hadn't Hill made a little mistake in his fastest lap, the Arrows-Yamaha driver would probably have reached the pole position. Villeneuve started on pole, as he set the lap time first, with Michael alongside him. Michael took the lead off the line, with Villeneuve following close behind. After the pitstops, it suddenly looked different. Just like three years earlier, the pressure was on Michael. Villeneuve was much faster on the new tyres than the Ferrari and placed his attack into the Curva Dry Sack. What happened then still continues to be one of the biggest scandals in the sport's history. Martin Brundle stated in the live commentary: "That did not work, Michael, you hit the wrong part, my friend!" Murray Walker added: "This is a replay of the world championship in 1994." With this manoeuvre, the battle for the title in 1994 also came into a completely different view. Schumacher was lynched in the Italian, English and German media. The FIA and the World MotorSport Council were also not impressed by the action. The FIA disqualified Michael after a special hearing on 11th November 1997. Schumacher was found guilty by a 24-member jury. He had to give up his second place in the World Championship and would not be prosecuted for a possible suspension concerning the year 1998. Max Mosley said: "The World Motorsport Council have carefully considered all the evidence in relation to the incident and the actions were deliberate, they were not premeditated." Schumacher reacted and admitted his mistake: "I have not slept well, I spent two or three days thinking that I had done something wrong, I have to learn from this, we are all making mistakes, I will come back stronger and I hope it will get better in the future.

Villeneuve would later admit that he knew this was going to happen. "We talked to the team extensively about it, we knew what things he would be able to do, I know I probably would not have been able to make the curve (Curva Dry Sack), if I tried again at a later time. The situation was the same, he had always wanted to take me off the track, I was happy to be able to continue because the car felt bad after this collision."

The idea to pass McLaren was a strategic choice because third place was enough for the title. Mika Hakkinen won his first Grand Prix, a marvellous moment which we discussed in 'the second chance'. Michael replied in 2009 to the question of whether he would ever have done things differently during his career as follows: "I would like to change the race at Jerez in 1997. I had other opportunities to become a champion there. I have learned and that has made me stronger."