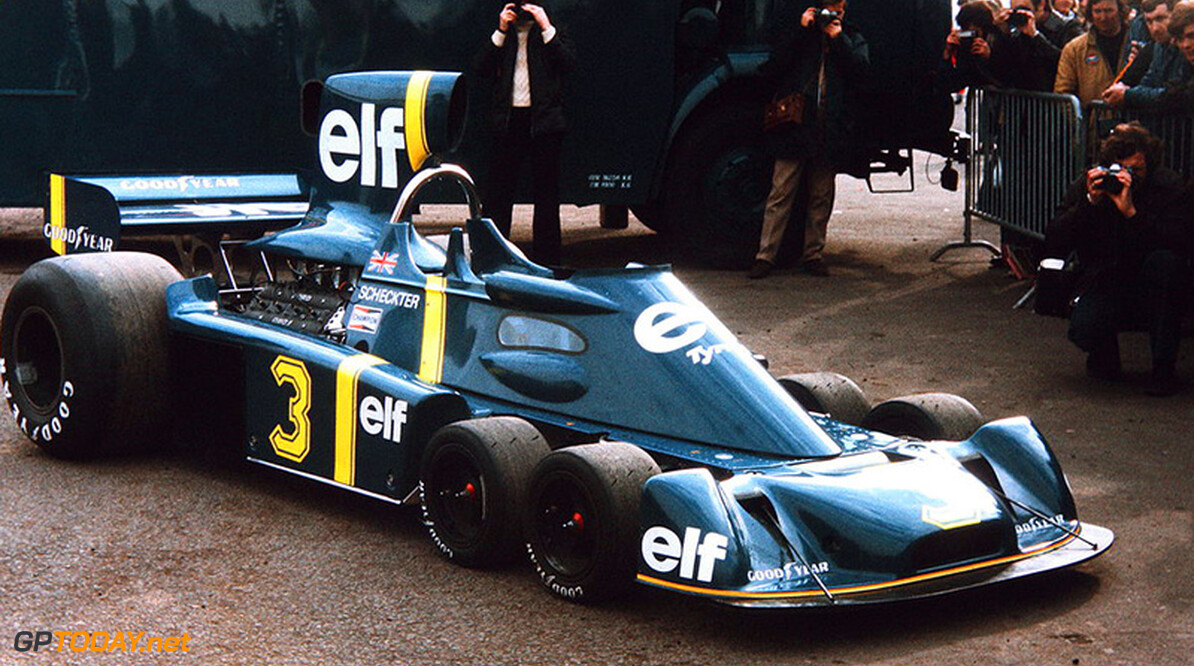 In the late sixties, Tyrrell's chief designer Derek Gardner was troubled by a new development in Formula One engineering. With the introduction of the lighter and more powerful Cosworth DFV (double four valve) much of the constructors started experimenting with four-wheel drive. A phenomenon that could potentially be the leading way for F1 cars from 1969 onwards. Four-wheel drive is in general a system that puts a lot of extra weight on the chassis, a necessary evil when the quest for improved grip and traction lead to the implementation of the system by teams like Lotus, Matra and McLaren. However, Gardner saw himself confronted with a problem at the Indy 500 (which was part of the Formula 1 calendar at the time). The high speeds increased the lift created by the high front wheels, causing the cars to lose grip at the front and making the four-wheel drive useless while delivering a boat load of understeer. What to do? Gardner stared out of the window and saw two birds on a wire. No, probably not that. But he did come up with the idea to make the front wheels significantly smaller to reduce front-end drag. In order to maintain front-end grip he needed to keep the amount of rubber gripping the surface of the track at a high, so he thought about four smaller front wheels. Whilst keeping the grip just as high, Gardner minimized front-end drag and kept the four-wheel drive system by supplying power to the rear of the two front axles. Tyrrell Project 34 was born. However, the four-wheel drive system wasn’t to be as the science of aerodynamics took the sport by storm. The P34 was put to rest until Gardner resurrected the plan halfway through the seventies. Though unique, the  P34 wasn’t the first and only six wheeler in the sport.

Precursors in the sport

Six wheelers in motorsports. They don’t relate to each other as much as you would think, but it's one of the most iconic forms of engineering lunacy. Why would a designer choose to do so? Does it work? What are the advantages, if any? The earliest versions of six wheelers can be found in the pre WWII hill climb races. Half way through the twenties, Hans Stuck (father of Hans Joachim) put an extra set of tires on the rear axle of his Austro Daimler. Cars from that era are known for their awesome power, especially their torque, and Stuck used the example of a tractor ploughing through a muddy field with ease by using four rear wheels. Hill climb tracks weren’t exactly smooth and mostly made out of gravel. The effect was significant and Stuck was victorious all over Europe. Mercedes and Auto Union soon followed with their own six-wheeled race cars. The Auto Union Type-C/D V16 looks like something straight out of a Transformers movie. Only one Type-C/D remains to this day and can be found in the Audi museum. During the war, a few of the Auto Unions were stalled in Zwickau, Saxony. Upon the arrival of the Russians in 1945, the cars were confiscated as loot. Most of them got destroyed. A Type-C was taken to Moscow for a closer inspection of its hair raising technology. After the autopsy, the car was abandoned after which they decided to cut it to shreds in 1976. Luckily though, a representative of the Riga Motor Museum managed to buy the car from the Russians. After the fall of the Soviet-Union the car was taken to Audi for inspection when they found out it was the only, still existing Type-C/D V16 used for hill climbing. The euphoria must have been impressive. The car was restored and is still being used at exhibitions, driven by Stuck Jr. A replica was built and made its debut at the 1997 Goodwood Festival of Speed, where it was driven by Pink Floyd’s Nick Mason.

The very first six wheeler that would fit perfectly in the motorsports freak show is the 1948 Pat Clancy Special. Pat Clancy, the owner of a large US based trucking company, experienced the benefits of having better traction by using multiple axles and decided to let race car manufacturer Frank Kurtis build him a race car with six wheels, divided over three axles –one on the front and two at the back of the chassis. Having four -wheel drive, Clancy thought that it would prove its benefit during the Indy 500. The six wheeled Kurtis, driven by an Offenhauser engine, reached the 12th spot at the 1948 Indy 500 which, at the time, was more than respectable. However, the relationship between traction and minimal rolling resistance was more complicated than that. The absence of telemetry at the time caused a lack of understanding this resistance. If it was up to Clancy, more traction with more axles was better. It's a good story though, and it must have been quite surprising to Frank Kurtis when he got off the phone after getting the order to manufacture an Indy car with six wheels and four-wheel drive. The Pat Clancy special can still be admired, although only a replica exists. The replica was built in 1999 by A.J. Watson, a legendary race car manufacturer and former student of Frank Kurtis. Watson built a couple of Indy 500 winning cars.

Back to Formula One. The Tyrrell P34 made its debut in 1976 at the start of the European leg of the season at the circuit of Jarama, Spain. Although a private team, Tyrrell was the team to beat during the early seventies, making Jackie Stewart champion in 1971 and '73. However, the Cosworth DFV became of age and Derek Gardner had to innovate to keep Tyrrell at the top: "It was still producing the same horsepower that it always had, or a little more even, but with the success of the Ferrari, the possible success of engines like Matra or anybody else who came along with a Flat 12, V12 or 12 cylinder whatever, you're going to be hopelessly outclassed. I wanted to make a big breakthrough." A prototype was presented in London in September 1976, dropping Frank Willliams' jaw onto the ground. Tyrrell partnered up with Goodyear to have them provide the custom made 10'' inch front tires. Scheckter hated it, Depailler loved it. Whatever their opinion was, the car performed very respectable. Though quite a few DNF's, the P34 took no less than fifteen podiums and a magnificent double in Sweden. Tyrrell ended the season third in the constructors championship. Three podiums followed during the 1977 season, revealing a lack in performance. The heavy front-end of the car formed a big problem and Goodyear had to stop the production of the 10'' front tires due to high development costs. Gardner did a last effort to improve grip by widening the front axles, but experienced a backlash in aerodynamics as the tires became wider than the front wing. The car was put out of competition after the 1977 season.

The eventual lack of success did not meant other teams weren't taking high interest in the concept of a six wheeled F1 car. March team manager Max Mosley saw a huge commercial potential. March was in the middle of a financial struggle, a special project could wake the interest of potential sponsors. Chief designer Robin Herd started work on the 2-4-0, a 1975 March 761 with two rear axles providing four-wheel drive. It had to be as cheap as possible, of course. The international press loved it and the design made the front page of quite a few motorsport magazines. Two tests were performed with the March;  in December 1976 and one in early 1977. Ian Scheckter tested it and although impressed by the traction it produced, couldn't get it round a corner. The development was stopped and the 2-4-0 was put to further use as a show car. Just as interesting and possibly more mythical was the Ferrari 312T6 whereby the number '6' refers to the amount of wheels. In March 1977 the press spotted a mysterious Ferrari driving round the Fiorano test track. The T6 showed four wheels being placed on a singular rear axle. Niki Lauda unsurprisingly kept his mouth shut after being overwhelmed by journalists. After Carlos Reutermann experienced an horrific accident, resulting in a burned out 312T6, the project was shelved. Whether Ferrari created the T6 out of publicity motives is unclear. Later, Ferrari would go completely mad by leaking a picture of an eight(!) wheeled Ferrari 312, driven by Clay Regazzoni at Fiorano. However, this clearly was a promotional stunt. The Ferrari appears to be parked and the extra wheels were simply placed in front of the rear wheel and behind the front wheel. Look it up, the extra two wheels are clearly disproportionate. Funny though!

A serious effort to reincarnate the six wheel concept came from Williams in the early eighties. The FW08 was designed by Patrick Head and featured two rear axles, following the same 2-4-0 concept that March laid their hands on five years earlier. The FW08 was built in 1981 and showed some serious potential. Because Williams had bigger financial and technical resources, the FW08 was developed with much more attention to safety, endurance and reliability. By making the rear wheels smaller, the airflow over the rear of the car was much less congested than usual. A problem that Gardner tried to eliminate at the front of the Tyrrell P34. As the underside of the FW08 grew in size, it created more ground effect, increasing its aerodynamic efficiency. This was the era of the ground effect cars after all. By combining this enhancement in aerodynamics with the incredible traction the four rear wheels offered, the Williams was bound to be a winner. The added weight of the four-wheel drive system wasn’t so much of a problem, as the chassis was already a lightweight compared to its competitors. However, fate was not on Williams' side as the FIA banned cars with more than four wheels. They also banned four-wheel drive systems. The FW08 never made its debut in 1984. Shame.