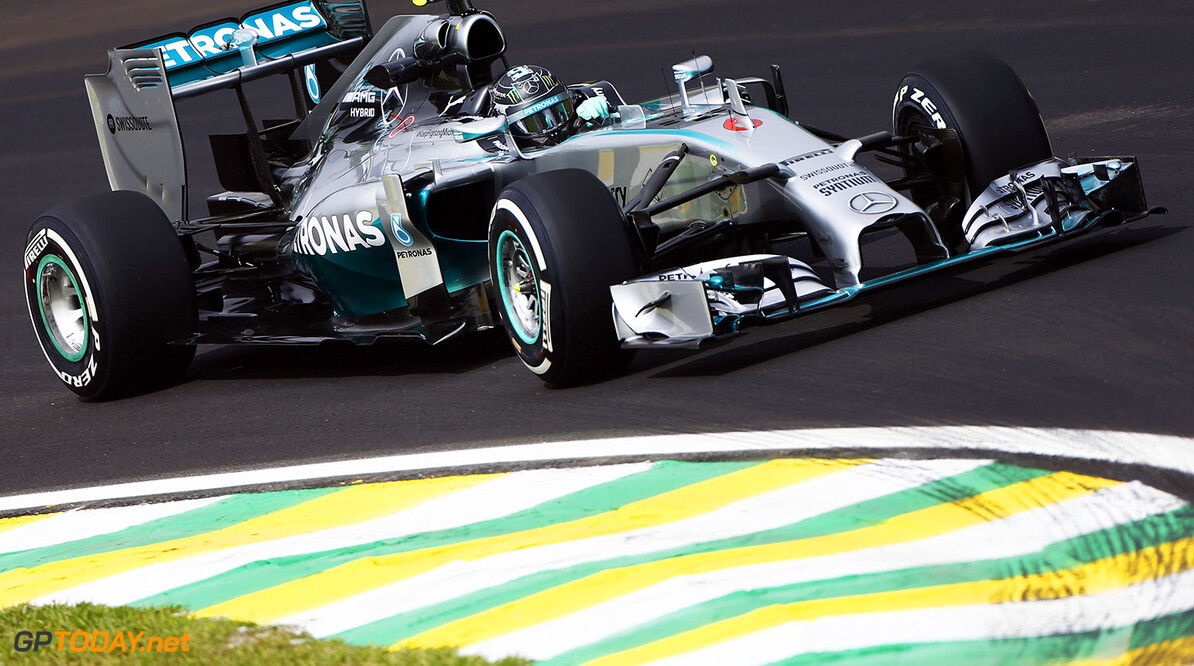 Rosberg looks to Massa to finish ahead of Hamilton

With only the 'Abu Double' showdown to run, Nico Rosberg nibbled back into title rival Lewis Hamilton's now 17-point lead with victory in Brazil. "Obviously I had a big mistake in the mid part of the race," said championship leader and favourite Hamilton, referring to his spin.

German Rosberg, however, who started from pole, insisted that he always felt in control of the Briton on Sunday afternoon. Still, he looked slightly glum on the podium. "No, I am happy. Very happy," Rosberg insisted. But he also acknowledged that, having failed to stop Hamilton's winning streak a week ago in Austin, the world championship is no longer under his control.

That's because if he wins again in Abu Dhabi, and Hamilton finishes second yet again, the controversial 'double points' outcome will hand the title to the Briton. Rosberg, then, is rooting for Williams' on-form Felipe Massa, who finished third in Brazil. If he splits the Mercedes on the podium in Abu Dhabi, Rosberg's title is back in his charge.

"He's the man," Rosberg grinned, pointing to Massa. "I need some Felipe Massa help." Later, he explained: "Lewis must not finish second in Abu Dhabi. He has to finish no higher than P3. I need to motivate Felipe to relax well before Abu Dhabi and have a stunning weekend to finish second!" Rosberg smiled.

Hamilton, however, indicated that although he always pushes to win races, he knows how to tackle the decisive race of the 2014 season. "The situation is quite different to my first title in 2008, but I know how to win," he is quoted by the German newspaper Bild. "For sure I don't need to risk as much as before, so if I find myself in a situation where there is a lot of risk, hopefully my experience will come into it."

That doesn't sound like a 'win at all costs' approach to Abu Dhabi. It could be because the highly controversial 'double points' situation threatens to eat up Hamilton's big lead with something like a mechanical breakdown. Even the architect of the scheme, Bernie Ecclestone, admitted in Brazil that he never envisaged his double points plan "would come to this sort of situation".

Hamilton departed Brazil with the message that the system is "unfair". Mercedes' Toto Wolff is quoted by Auto Motor und Sport: "If it (reliability) wipes one of them (Hamilton or Rosberg) out, it will put a big shadow over the championship. Nobody likes the double points. We should talk about it and maybe get rid of it for next year," the team chief added. "Every part on the cars in Abu Dhabi will be double checked," Wolff promised. "We will use all low-mileage parts."

Wolff also admitted he remains worried Hamilton and Rosberg will collide in Abu Dhabi, even though the venom appears to have disappeared from their relationship in the past weeks. Wolff disputes that. It has emerged that Hamilton did not attend a team dinner on Saturday night while Rosberg did, but Wolff insists that both drivers still have full access to one another's technical information.

"The atmosphere in the team is intense," he revealed. "They didn't talk to each other here (in Brazil) but that's ok. The championship is in the decisive phase now and in the team we can really feel that." (GMM)
F1 News Felipe Massa Lewis Hamilton Nico Rosberg Mercedes Williams
<< Previous article Next article >>
.