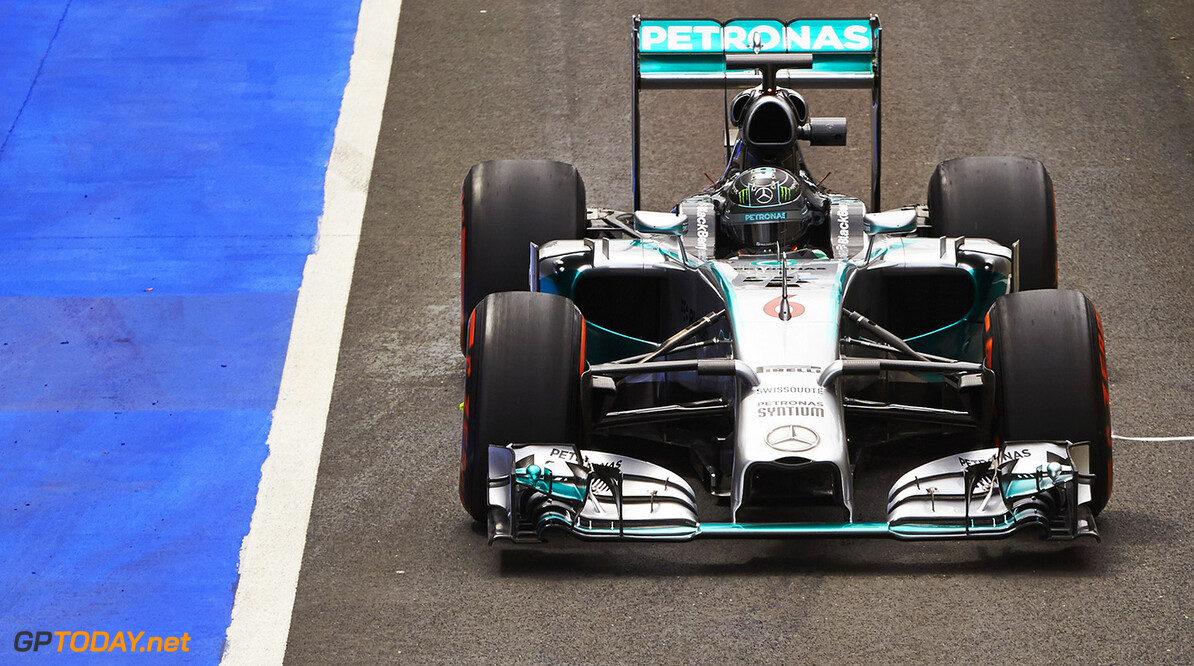 Dominant Mercedes not 'in trouble' because of FRIC ban

Lewis Hamilton left Silverstone without making a single comment to the media after testing on Wednesday. He might have been advised to steer a wide course around the 'Nico Rosberg is not German' controversy. But there could be another issue he - and Mercedes - were keen to swerve.

The FIA's Charlie Whiting has dropped a bombshell on F1 teams, warning them in writing that systems mimicking illegal active suspension - commonly referred to as 'FRIC' - probably are in fact illegal. The concept has become so widespread that it is believed every single 2014 car features it. "It came as a surprise. It's not based on any team action," McLaren team boss Eric Boullier told reporters on Wednesday when asked about Whiting's intervention. "It's an FIA action."

Before Boullier's comments, it might have been assumed that a rival team complained to Whiting about Fric, because the iteration aboard Mercedes' ultra-dominant 2014 is considered to be more advanced than most others. "I hear the Mercedes system is very complicated," Marussia driver Max Chilton told Britain's Sky at Silverstone, "so it could affect them more."

For the moment, the FIA is not actually banning the system, but in the technical directive, Whiting warned that teams could theoretically begin to lodge protests against their rivals, starting at Hockenheim next weekend. So some teams might simply dodge the controversy by removing 'FRIC'. "We thought we might as well try the car and see what we could do without it," Chilton said after Wednesday's test action, "in case it goes that way."

The Briton said the backmarking Marussia did not feel too different with 'FRIC' off the car. But that could be because the Marussia system is not as "extreme" as some. "I think some teams may have been extreme," agreed McLaren's Boullier. "This is maybe why the FIA is questioning the legality of this system.

"I don't know the secrets of the designs of the other teams," he added. "I think for most of the teams it would not be a game-changer. There is maybe a couple of teams who have been extreme and obviously who could be potentially in trouble to switch back to a non-connecting system," said Boullier.

Theoretically, the 'Fric' issue could be good news for Mercedes' rivals, and very bad news for the ultra-dominant German team. "After what the FIA has said," Red Bull's Sebastian Vettel is quoted by Speed Week, "I can surmise that some cars will be more affected than others if there are any possible changes."

Mercedes' big gap, however, is probably safe, according to Michael Schmidt, the respected correspondent for Germany's Auto Motor und Sport. "Mercedes may have to give up some of its advantage," he said, "but the gap to the chasing pack is so big that the Silver Arrows is not in trouble. Especially as Red Bull has a similarly-good system." (GMM)
F1 News Lewis Hamilton Nico Rosberg Sebastian Vettel Mercedes McLaren Marussia
<< Previous article Next article >>
.