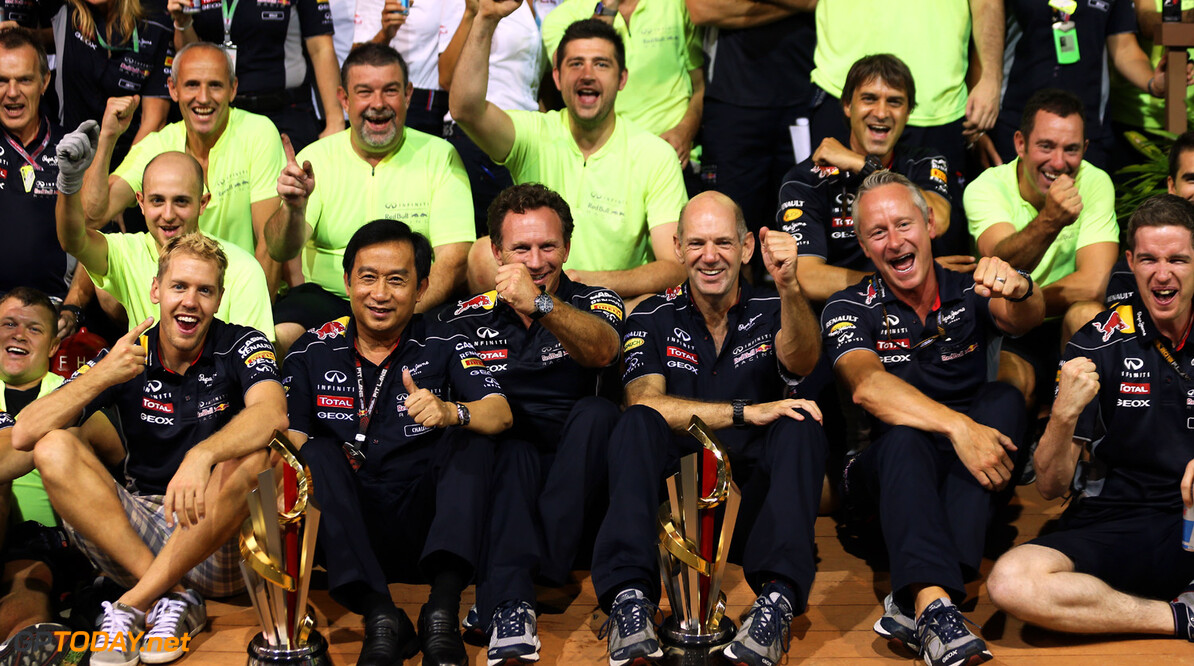 Vettel halted title party to help his mechanics pack up

Sebastian Vettel halted his title-winning party in India to help his mechanics pack up the Red Bull garage, it has emerged. Auto Motor und Sport correspondent Tobias Gruner said he stopped by the team's garage in the hours after the race to congratulate his countryman. "Unfortunately I can't shake your hand," Vettel reportedly told Gruner, "because mine are completely dirty!"

Bild newspaper said Vettel decided to help his colleagues so that they would have more time to join him at the celebratory party, held at the Radisson hotel. A Red Bull mechanic told the Independent newspaper: "I really wish people could see this side of the guy."

Undoubtedly, however, Vettel's struggle for popularity is not just about his personality. Some question whether he really does stack up against F1's legends like Schumacher, Fangio, Prost and Senna. Asked if the 26-year-old has only won four titles because Adrian Newey outpaces the rest of the field, Bernie Ecclestone answered: "I don't think so. Actually, if anything it's the opposite. Although it's undeniable that the machine has a big role in formula one," he is quoted by Repubblica newspaper.

Sebastien Buemi, Red Bull's reserve driver, told Brazil's O Estado de S.Paulo that Vettel works hard for his success. "When he wins a race, the next day he's already at the factory, working on the simulator for the next race," said the Swiss. "It's not true that he wins just because he has a great car. If the image of the car was the one Mark (Webber) gave it, it definitely wouldn't be the same," added Buemi.

Vettel's former technical boss at Toro Rosso, Giorgio Ascanelli, said: "Sebastian reminds me of Ayrton (Senna)." In the 80s, the Italian was the great Senna's race engineer. "He (Vettel) lives to be a driver. Like Senna, he also hates to lose. He was designed to win. Any other outcome means nothing," Ascanelli added.

Red Bull's Helmut Marko told Der Spiegel: "In Formula BMW, Sebastian won 18 of the 20 races, but the only thing he thought about was why he didn't win those two races." Vettel's Indian grand prix victory on Sunday was his fifth on the trot, his tenth of the season, and the 36th in his F1 career.

Hans-Joachim Stuck, a German motor racing legend, thinks Vettel can beat Michael Schumacher's all-time record of 91 wins. "I think he can get 15 titles as well. Why not?" Stuck told Austrian Servus TV. "He is still incredibly young, so it's easily possible."

Meanwhile, Blick newspaper reports that although Vettel was scheduled to touch down in Zurich early on Monday, the only F1 driver on the flight from Delhi was in fact his friend Kimi Raikkonen. (GMM)
F1 News Sebastian Vettel
<< Previous article Next article >>
.