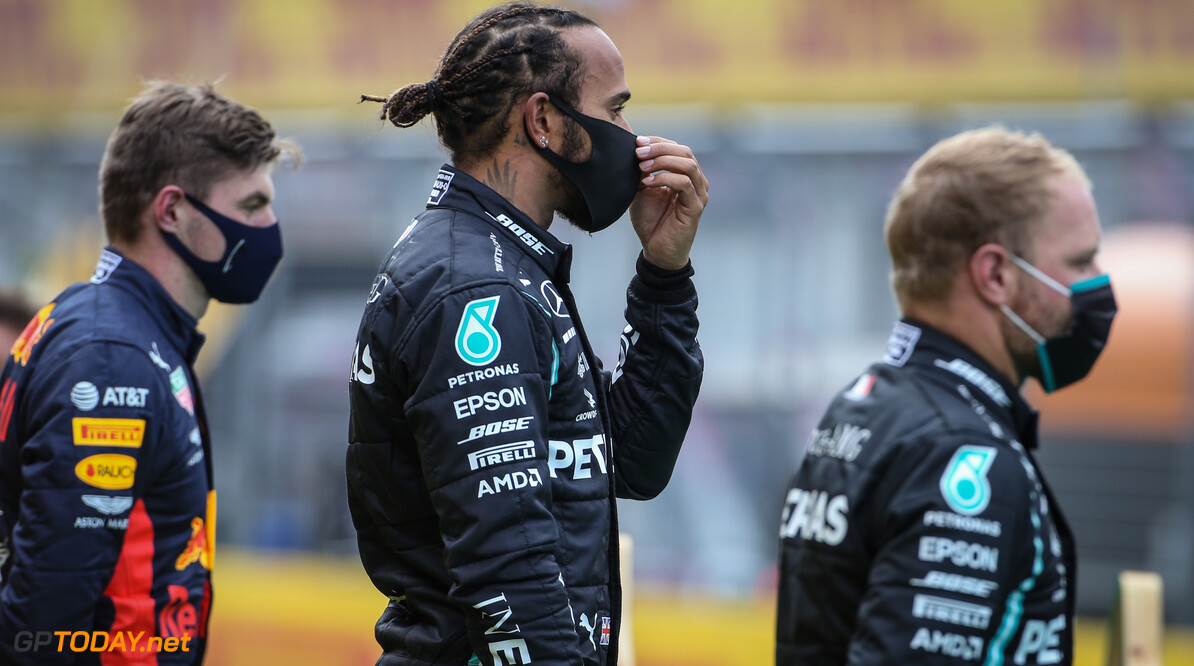 Hamilton recovered well from his disappointing opening round last week, qualifying a whopping 1.2s ahead of his nearest challenger with an amazing lap in the wet conditions. In the race, he had a few cars in between himself and his nearest challenger Valtteri Bottas, with the Mercedes car in a class of its own in the dry conditions. Hamilton drove the race like we have seen him do so many times before, controlling the field with a comfortable gap at the front.

Bottas had the perfect start to the season in the last race, but unfortunately for the Finn, he couldn't keep it up this weekend. He by no means had a bad weekend, but he was a tad off the pace of his teammate all weekend. He had a solid race once he got past Sainz early on, and then managed his tyres well to get past Max Verstappen in the closing stages.

Many would have seen Verstappen the main challenger to Hamilton in a wet qualifying session, but a spin on his final push lap dented any chances of getting close to the Brit. He did still manage to get his Red Bull onto the front row however. The Dutchman was still comfortably ahead of his teammate Alex Albon who qualified down in seventh. When it came to the race on Sunday, Verstappen also had his teammate covered.

After last weekend, it seemed we had seen a new version of Albon in the car. He was not only much closer to his teammate Verstappen, but was also challenging for the win for the first time in his career. However, things didn't quite go his way in both qualifying and the race. At one stage in the afternoon, he was a huge 35 seconds behind his teammate in an equal car.

Norris was consistently around the top of the leaderboard in qualifying, but was unlucky on his final push lap to be stuck close behind the Renault of Esteban Ocon. He did receive a self-inflicted three-place grid penalty however for passing Gasly under a yellow flag in practice, so he ended up starting the race in ninth place. He gained around fifteen seconds on the cars in front in his final stint and pulled off some impressive overtakes to earn sixth place. He then managed to catch the damaged car of Perez and pass him on the final corner on the final lap to finish what he described as the 'best race' of his career.

Qualifying could not really have gone worse for Perez, with the Mexican driver eliminated in the first part of the session. He started from seventeenth on the grid, but he was clearly a man on a mission. He made light work of the other midfield cars at the start of the race, and managed to climb up to ninth place by the time the first round of pitstops came around. Unfortunately, he made contact with Albon and heavily damaged his front wing, losing fifth place to Norris. Even with the contact, it doesn't take much away from the fact that it was a hugely impressive drive from Perez.

Stroll impressed many with what he achieved over the weekend, as the Canadian's lap time in Q1 was two seconds faster than his teammate's best effort in the session, putting his Racing Point in thirteenth on the grid for the race. He demonstrated his racing skills during race battles, not making any errors to stay within the DRS zone of the Renault for numerous laps. It is clear that he still wasn't on the same level as Perez in the race but it was an encouraging performance from Stroll.

Ricciardo was another driver hoping for a better result in the second race in Spielberg, but his weekend started off in a pretty bad way. He lost the rear of the car on the penultimate corner, spinning off into the tyre wall. He walked away from this high-speed crash with a bruised knee, but was given the all-clear to go racing. He was outpaced by his new teammate Esteban Ocon for the first time in qualifying but made up for it at the start of the race. He then stayed in sixth place for the majority of the race, holding off Stroll for many laps. He couldn't hold the Racing Point back forever though, eventually having to concede the position to Stroll and Norris after being pushed wide at turn three.

Sainz was not happy with himself after missing out on the fight for a podium one week ago, and he seemed determined to put in a good lap on Saturday. He went above and beyond with this ambition, as the Ferrari-bound Spaniard put in a stunning lap to put his McLaren in third place on the grid. Unfortunately, had a slow pitstop which brought him out of the pits behind Ricciardo and both of the Racing Point drivers. Sainz then struggled with his tyres in the latter stages of the race and had to let Norris past.

Kvyat is a driver that had a rather quiet race weekend, as he could only manage fourteenth in qualifying compared to a fantastic eighth for his teammate Gasly. It is worth noting that he was impeded by Leclerc on one of his efforts in the session, with the Ferrari driver receiving a three-place grid drop for the offence. He did not let the disappointing result in qualifying hamper his chances of a points finish, as the Russian put his head down and executed a good strategy to get the most from his AlphaTauri

Alfa Romeo endured a tough weekend last week, however Raikkonen is confident he could have scored points on Sunday in Styria had it not been for strict instructions to save fuel during the race. After dropping out in Q1, the Iceman made steady progress in the race and seemed to have more confidence in the C39 car.

Pace-wise, it was another disappointing event for Haas, however this time around it managed to get both of its cars to the end of the race with no major issues. Points weren't on the cards for Magnussen on Sunday, as the team sets its sights on Hungary for some good fortune.

Grosjean has now gone 12 races in a row without a top ten finish. His weekend in Austria took a hit in qualifying, as an ERS issue saw him fail to set a timed lap and start from hte back of the grid. However, he made strides forward in the race, but like Magnussen, points simply weren't on the cards.

Giovinazzi was the only driver to meet the barrier during the wet qualifying session on Saturday, which resulted in a changed gearbox. His race was a quiet affair, with little coming out of it for the Italian.

Gasly had a pretty solid qualifying session to get inside the top ten, however the Frenchman sustained damage on the opening lap which hampered his pace. The AlphaTauri driver was unable to get a sniff of the points after trying an alternate strategy, in what was an overall disappointing weekend for him

Russell was the star of qualifying, dragging the Williams car to 12th on Saturday before being promoted one spot following the application of penalties. Unfortunately, the Briton made a mistake while battling Magnussen and fell to the back of the field. Points were unlikely for him in the race, but it was encouraging for Williams to be somewhere other than the back of the pack.

Another quiet weekend from Latifi, however the rookie was far from embarrassing himself during the weekend. Although he dropped out in Q1 on Saturday, he was close to the drivers ahead and didn't fall off dramatically during the race.

Ocon produced a stand out performance in qualifying by placing his Renault in fifth place, however, a mechanical problem forced the team to retire his car when he was on for a strong points finish.

It was certainly a weekend to forget for Ferrari, but perhaps more so for Leclerc. Failing to reach Q3, demoted due to a grid penalty and clashing with his teammate on the opening lap was far from what Leclerc is capable off. He held up his hands post-race and accepted the blame, but it didn't fix the hindered weekend in which Ferrari was hoping to gather data on upgrades.