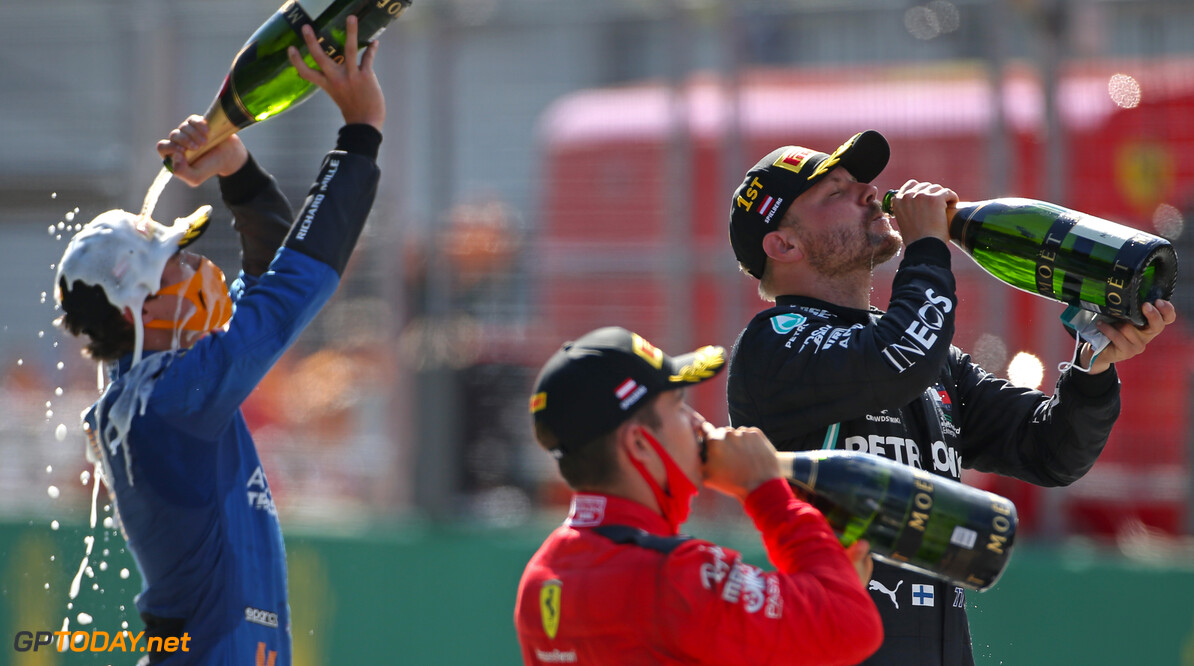 Bottas started the new season off as strongly as he would have hoped, taking pole position, withstanding pressure from his teammate during the race and taking the chequered flag to record his eighth career victory. Will he have learned from 2019, and is he now mounting a serious title challenge to Hamilton? Only time will tell.

Ferrari's woes were quickly realised on Saturday when it became clear that it was not one of the top three teams in Austria. Nevertheless, Leclerc managed to pull the car into second place at the end of the race and was easily the best performing Ferrari throughout the weekend.

Norris risked his brilliant drive with a late lunge on Sergio Perez, however the Briton survived contact and set a scintillating last lap to obtain a podium finish following a time penalty for Lewis Hamilton. It was a mature drive from the Briton, who has brought new confidence into his sophomore year in F1.

Hamilton was awarded two penalties throughout the weekend which hampered both his qualifying and race result. However, in the race, the six-time world wasted no time closing up onto the back of Bottas, but couldn't pass amid demands from Mercedes to stay off the kerbs to protect the car.

Perhaps understandably, much of the post-race limelight is on Sainz's teammate Norris, however Sainz still drove a respectable race to bring home strong points that now sees McLaren sit second in the constructors' standings.

It was difficult to know what to expect from Racing Point heading into the weekend, with lots of talk suggesting it was at the front of the midfield. However, the team was out-classed by McLaren and Perez ended both qualifying and the race. Still, it was a solid way to begin a new season as the team chases more strong results.

With chaos unfolding up and down the field, it was a quiet race for Gasly in general, who kept his head down and scoring solid points for himself and AlphaTauri in its first race under a new name.

Ocon's return to F1 was a little bit on the less spectacular side however it is worth giving him some leniency, as it was his first competitive weekend since the 2018 Abu Dhabi Grand Prix. He too managed to avoid trouble and crossed the line in eighth place.

Alfa Romeo's pace during the weekend was worrying, but there was positive glimpses for Giovinazzi's whose future beyond the 2020 season remains unknown. The Italian managed to secure two points in Spielberg but will be hoping for more in the races to come.

Sunday was as tough as it gets for Vettel, but after watching his onboards, it's difficult not to feel sorry for the German. As he said himself he was happy to have only spun once, as the car seemed to want to escape from underneath him at every corner. A horrible way to start a campaign, in what looks to be a difficult car to manage.

It must be difficult for any rookie starting their first Formula 1 race, but especially so if you're driving a Williams. However, judging by their results this weekend, the team have massively improved in 2020. We feel we might be being a little generous to Latifi with this rating, but we felt he deserved to be cut some slack given that it was his first outing as a Formula 1 driver and faced cooling issues throughout the race.

Kvyat certainly didn't have a bad weekend from his side, but it wasn't good either. He was slower than Gasly in qualifying and then in the race too, but only by a fraction. He will be hoping for some better luck next time out after a tyre blowout ended his chances of a likely points finish.

Although he still wasn't quite on the pace of teammate Verstappen in qualifying, Albon had a great race up until the final few laps. He was arguably the favourite for the win after the final safety car, being on the soft tyres chasing down a pair of struggling Mercedes. He was unlucky to be taken out of the race by Hamilton, but will get a chance at redemption next weekend.

Raikkonen had a weekend to forget, as the Finn was slower than his teammate Giovinazzi in qualifying and was unfortunate to lose a wheel during the race. The Alfa Romeo seems to be well off the pace this year along with the other Ferrari powered cars, and if it continues like this you have to wonder why Kimi would want to stay.

Russell was one of the star performers this weekend, as he did all that he could with the new and improved Williams. He was tantalisingly close to his first-ever Q3 appearance on Saturday, and then was in contention for points until he was forced to retire.

Grosjean had a good qualifying session in a Haas car that once again seems to be near the back of the midfield, but then made yet another silly mistake in the race. The Frenchman ran off the track which cost him a lot of time, but then was unfortunate to retire the car with breaking issues.

Due to the early retirements of the following four drivers, each has been handed a 'not applicable' rating as their race potential was not close to being fully reached.