Six years on: Remembering the first F1 points for Bianchi and Marussia

On this day six years ago, Formula 1 witnessed of its greatest modern-day underdog stories, when Jules Bianchi secured his and Marussia's first points.

Having originally started competing in 2010 under the name Virgin Racing before becoming Marussia F1 in 2012, the Banbury team was consistently stuck at the back of the F1 field.

In terms of championship results, progress could not be seen year-on-year and from 2010 to 2013, it failed to record a single top ten finish in the sport.

Heading into the Monaco Grand Prix in 2014, expectations were not high, as its previous best result around the Principality was P14, courtesy of Timo Glock (2012) and Max Chilton (2013).

Bianchi qualified in 15th for the 2014 edition of the race, but was shuffled back on the starting grid due to a gearbox change. 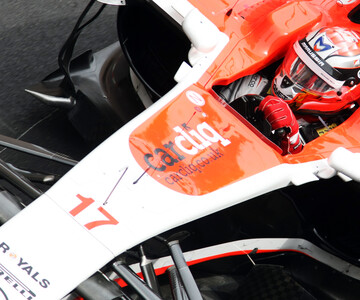 A clean start was made by the 25-year-old and before the halfway mark of the grand prix, the pack was already reduced to 15 cars. Pastor Maldonado failed to make the start, while retirements followed for Sergio Perez, Sebastian  Vettel, Daniil Kvyat and Adrian Sutil.

On lap 36, Bianchi pulled off one of his most iconic career overtakes, as he banged wheels with Kamui Kobayashi at Rascasse to move into 13th place.

Following lap 50, a series of retirements occurred which played into the hand of the Marussia team. Jean-Eric Vergne and Valtteri Bottas both had car trouble and exited the event, while Esteban Gutierrez hit the wall - reducing the pack to 14 contenders.

All the commotion had left Bianchi in 10th an in contention for a point - however, he had to deal with a five-second time penalty, which cast doubt over his prospects.

An ambitious move from Kimi Raikkonen on Kevin Magnussen at the hairpin put both cars in the barrier, promoting Bianchi up to eighth.

The Frenchman couldn't create a five-second gap to compatriot Romain Grosjean behind, however, Bianchi and Marussia held on to secure ninth place.

Speaking after the race, Bianchi said: “We have been waiting for this for a long and now that we have done it I am so proud of the team. They did a really good job and I am really happy to give them the result.

"It was really stressful for me in the car and I guess it was for the team as well as we had some penalties, so I was lucky to finish in the points. I cannot say anymore, it is just amazing.” 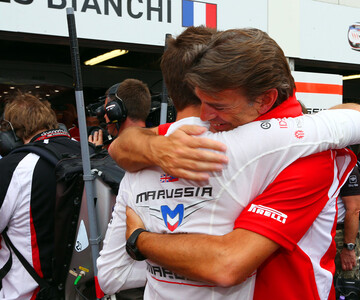 Team principal Graeme Lowdon added: “What we are really pleased about that it’s a sign of progress. We only have 196 people. This is a direct reward for people who have worked very hard.

“The money paid in the sport is based on results at the end of the season. We've known from Brazil 2012 it can all change in a final moment. That had repercussions in the tens of millions. We are only partway through this season, so we keep our feet on the ground.”

Marussia would become Manor for the following year, however it fell off the grid completely in 2016, with one more top ten finish coming its way in that time, courtesy of Pascal Wehrlein.

However, Bianchi's achievement will forever be etched in F1 history, as it showed the world his determination, heart and talent. Rest In Peace, Jules.