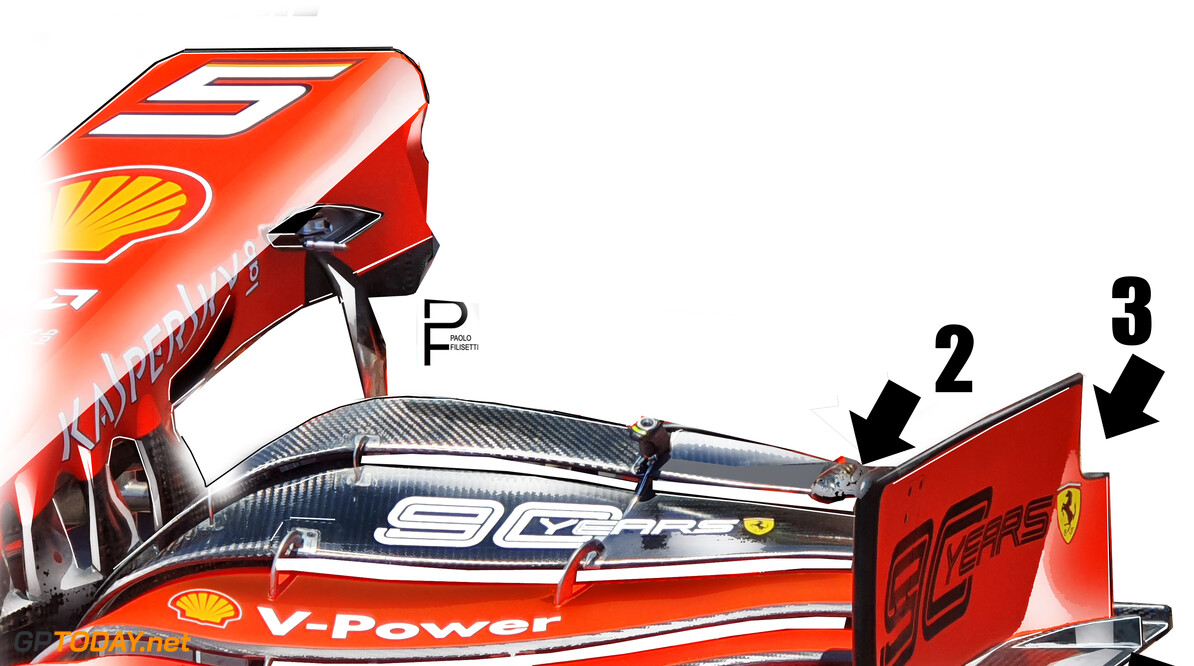 It has been said several times that Ferrari has prepared a development for France, which was above all based on the evolution of the front wing. In addition, an evolution was introduced at the front of the floor, but the size of the package that the team brought to Paul Ricard surprised many, including a number of rivals. The main components were the front wing, the front brake ducts, the floor and the rear wing.

Floor does not convince Ferrari

After the problems that were visible in Melbourne, Ferrari has reset its development plan, so that first to look for the direction needed to improve the car's weaknesses. As is known, a lack of downforce is the car's biggest problem. After the race in France, Binotto emphasized that the direction chosen for the upcoming races is to increase the downforce, at the expense of efficiency on the straight

It is clear that one of the changes did not convince the engineers in a direct comparison with the old one in the first practice session - the floor. This element looked almost the same as the previous one, but had some differences in the upper section. A double series of vortex generators appeared there, which were placed diagonally in accordance with the horizontal slots. These were the visible elements, while this was assisted by a different profile of the diffuser channels.

It is important emphasize that the new floor has not been put aside for good and that it is being tested further in Austria. In this case, it is not correct to speak of a lack of correlation between simulator, wind tunnel and circuit. Binotto strongly denied this. Nevertheless, the evidence remains that for the second time the developments have not been entirely convinced, just like in Spain.

The new front wing remained on the car all weekend and although it has a strong relationship with the previous version, it is a radical revolution. The concept based on outwash (steering the air currents around the front wheels) has remained, but it is clear that the effect of this has been greatly reduced.

The biggest tangible differences is the main profile that bends more downwards at the endplates, the flaps which now do not have the torsion that contained a progressive downward line towards the endplates, and finally the end plates have a rectangular cut-out in the rear upper corner. In addition, a triangular vortex generator has been added to the outer horizontal part to draw the air streams further out.

The changes to the rear wing were concentrated on the endplates. The lowest section has been overhauled at the rear, where the large vertical slots disappeared, while the number of vertical fringes that send out the air streams above the diffuser became lower. It appears that they formed a marginal blockade, so it was decided to remove them.

Where Ferrari got the attention for the wide range of innovations, Red Bull got attention for the changes to the mirrors. During the races so far we have seen that these elements do not play a secondary role in controlling the air flow towards the rear and the openings in the sidepods.

Not only is the inner support characterized with an angular S-profile, which includes the upper cover, but also the outside, which acts as a regulator of the air flow to increase the inlet pressure of the air flow towards the openings of the sidepods, while an external portion is diverted by the generation of small swirls, which pushes away the turbulence worked up by these elements.

This is of course a small aerodynamic development, which, however, shows the accurate aerodynamic research in Milton Keynes by optimizing such a strategic area of ​​the car. 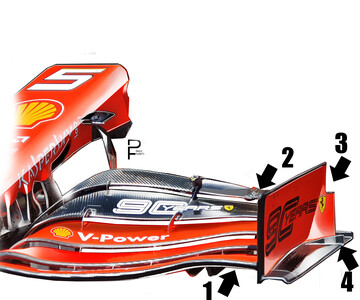 The front wing is a strong development from the previous version. The most important changes are to the main profile, which deflects near the endplates (1). The flaps have lost their torque for the endplates (2). It now has a rectangular cutout (3) at the top and a vortex generator has been added on the outside of the horizontal section (4). The outwash effect is thus reduced. 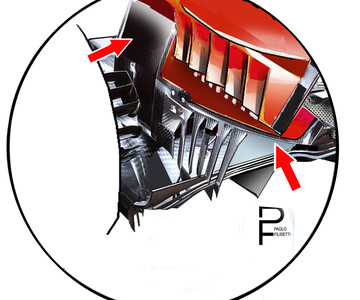 The endplates are the modified elements. At the rear, the two vertical slots that previously restored the air currents have disappeared. At the bottom, the number of frills above the diffuser is reduced. 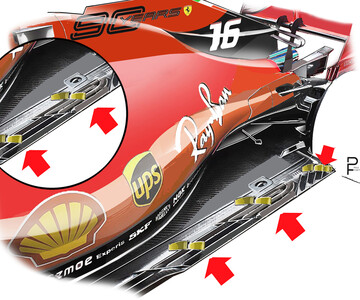 Ferrari evolution of the floor

The new version was visually different due to a double series of vortex generators, which were placed diagonally across the horizontal slots on the side. 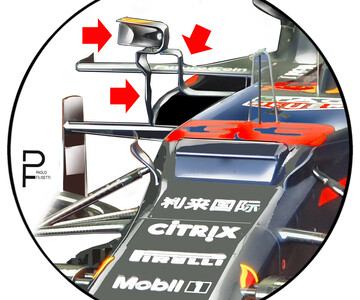 The mirrors of the RB15 showed perhaps the most extreme evolution to date, even compared to previous experiments on other cars. The curved S-shaped internal support produces a higher pressure of the air flow that goes towards the inlets of the sidepods, thereby cooperating with the external. It's crucial in managing the turbulence, which is diverted away from bodywork.