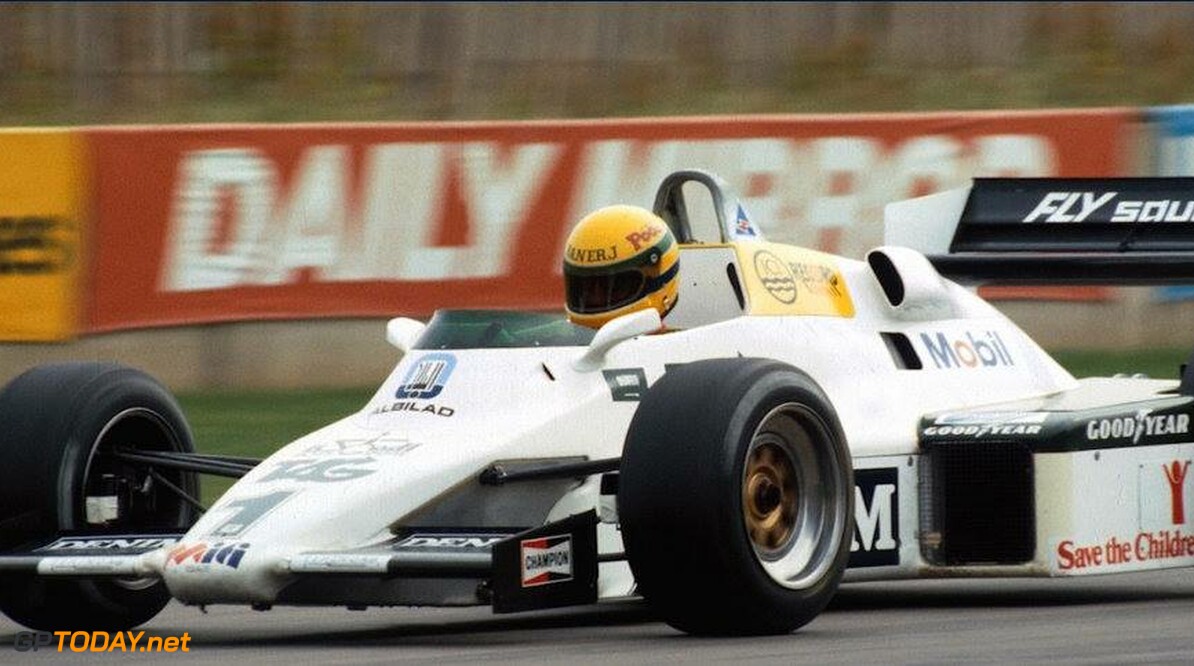 The first test in the Williams FW08C Ford Cosworth DFV

The Brazilian television station Globo made a report of this first test. It took place in Donington on July 19, 1983. It would be the first time that Ayrton would get into a Formula 1 car. The week before the test Ayrton had won the British Formula 3 race at the Silverstone circuit.

It was in the period that he got his first setback since he drove in Europe. Nevertheless, Ayrton was optimistic and was looking forward to this new challenge. The circuit that would be used, the club-circuit of Donington Park (National) was just under two miles long (3,149 km).

Ayrton arrived at Donington Park early in the morning. After being greeted by the mechanics he quickly went to take a look at the car. "I won all the races I did here at Donington Park," the confident Brazilian said. "In 1981 I won 1600 in Formula Ford, 1982 in Formula Ford 2000 and this year in Formula 3. This circuit has always suited me well and it suits me."

At 9.00 am the owner of the team, Frank Williams arrived. He had come to Donington to see the Brazilian performance with his own eyes. The mechanics had already adjusted Ayrton's seat to the nearest centimeter. Ayrton got a new set of pedals for this test. When entering the car Ayrton got his first advice from the mechanics.

The Brazilian listened obediently. He asked the mechanics to tighten his belts properly and to close them in the right way. For the test Ayrton reported the following: "I am very grateful to God for this opportunity. I have waited a long time for this and I am glad that he helps me to sit here in the car with peace and quiet." That the Brazilian was very religious was no secret. We will therefore also pay attention in a later part to his ideas regarding his faith.

The Williams FW08C was started at 9.21 am. For the first time in his life, Ayrton got the chance to drive a Formula 1 car. After a few quiet laps the Brazilian got the confidence in the car. He got acquainted with the speed that Formula 1 brought with it and felt at home in the car after a while. His lap times went down rapidly. The British team would eventually have a time of 1:00.05. This time was preferably one second faster than the time that Williams driver Keke Rosberg drove at an earlier stage.

The time was so fast that there was no one before who had covered the lap of the Donington park circuit faster in a Williams. "I think it's great that I got this chance from this fantastic team," Ayrton said afterward. "I still haven't made a decision about the upcoming Formula 1 season. Williams has still not made me an offer either."

When asked if he was interested in the seat at Brabham, as Piquet had been negative about him, he replied: "Until Bernie Ecclestone won't improve his offer, I won't do anything. If he does, I will probably agree with his proposal. There are several points we need to negotiate on. If they are negotiated, there is certainly a possibility to sign the contract."

Senna then explained what a possible contract would entail: "I want to appreciate what I have achieved so far in motorsport. I also want to have a future in Formula 1. These future possibilities should serve as a basis for my further Formula 1 career.

Frank Williams stated the following after the test: "The only reason he is here is because I spoke to him a while ago. He said there was a lot of teams that wanted to contract him for the next ten years. I said we wouldn't put young drivers in the car as racing drivers. But I wanted to offer him a test.

"'It is a real pleasure to offer you the car'," he told Ayrton. "'Just drive around in the car, gain some experience, it will help you make the step to Formula 1'." The Brazilian would eventually go around 81 times on the club circuit of Donington Park (National). This circuit is the Grand Prix circuit excluding The Esses and the Melbourne Hairpin. The Melbourne hairpin was ultimately the place where Ayrton would overtake his big rival Alain Prost at the SEGA Grand Prix of Europe in 1993. Prost, ironically, drove in a Williams that day.