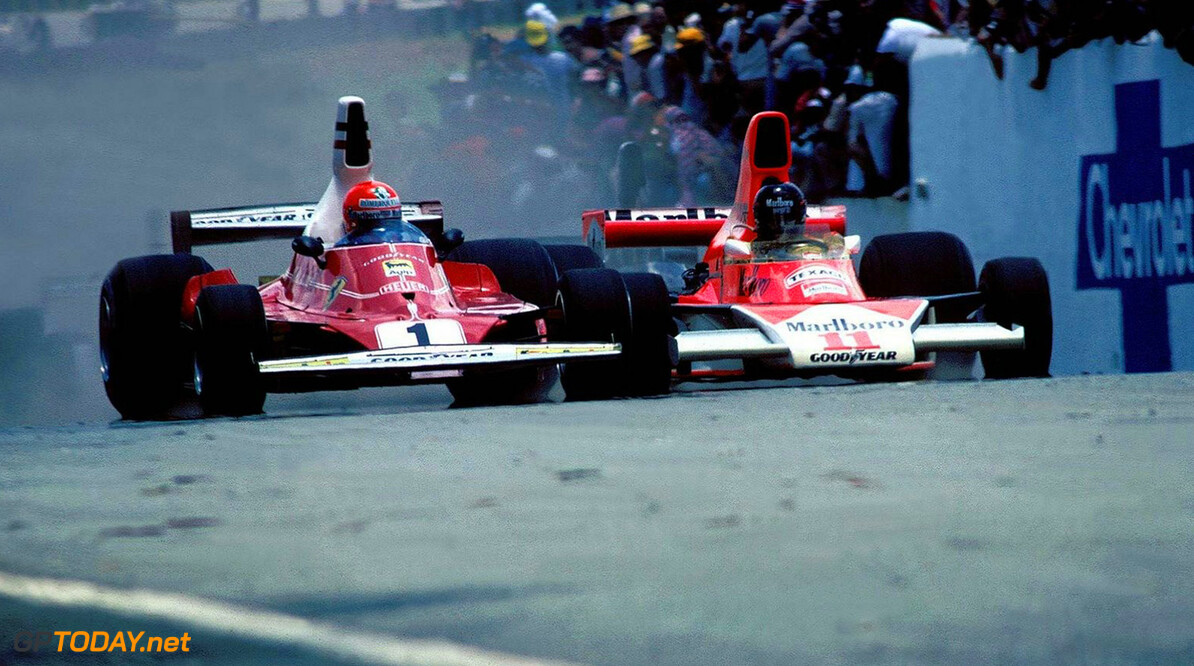 History: The 1976 season: Ferrari versus McLaren

The new Formula One season will start in Australia on the 20th of march and signals not only the start of what will hopefully be an exciting year, but also the 40th anniversary of James Hunt's thrilling season of 1976 when he managed to lift the crown after a rain soaked Japanese Grand Prix. It has been forty years ago since Niki Lauda and James Hunt went head to head in what became a championship to never forget. Lauda versus Hunt, Hunt versus Lauda. A battle of giants that made its way into the history books. Ferrari's and McLarens, playboys and professors, drama and euphoria, death and immortality. A showdown in the last Grand Prix. Winning it with one point the difference, or losing it by a single point: it's from what perspective you wish to look at it. The 1976 Formula One World Championship in which Niki Lauda and James Hunt treated us to one of the most closely contested seasons of all time, has already been immortalized in magazines, books, documentaries and even by Hollywood (Rush, 2013). Because of this wide array of documentation, a historiographical problem occurs: what is there more to talk about? Not a lot, no. However, we can still find a few great subjects with which we can celebrate that beautiful championship. First, we are going to take a look at the mechanical workhorses with which Lauda and Hunt battled it out in the asphalt arena's. How do they compare? What performance has to be attributed to the driver, and which one to the designers of the cars? Next week, we will take a look at all the things that didn't make it to the script of Rush, for instance Lauda's lawnmower incident, where he managed to break a few ribs.

The Ferrari 312T may be one of the most iconic Formula One cars of its age. Fair enough, it might not be because its outrageous design, because it wasn't, or because of its utter dominance and explicit handling qualities, it wasn't exactly a Mercedes hybrid. Yet, this car got its fame because the 312T chassis formed a great platform upon which a total of six versions were made, specific to each season. Also, it was the machine that was handled by drivers like Lauda, Regazzoni, Villeneuve, Scheckter and Reutemann. They took the 312T to a total of 27 victories, four constructors-, and three drivers titles. Every year, Ferrari made small changes to the car that were required after regulation changes. This worked out well, as the entire field was still driving with Cosworth DFV engines and Hewland gearboxes and Ferrari built a flat 12 that was of reasonable weight, gave more power and allowed for higher revs. They also developed a new gearbox, made out of magnesium. The gearboxes of that age weren't able to cope with revs upwards of 11.000, while the Ferrari could already pull more than 12.000. The new transverse box was light and small enough to fit lower in the car and more to the centre, creating a very stable chassis and caused for better handling.

The McLaren M23 was, just like the 312T, a race car that definitely deserves its iconic status. McLaren are not denying this. They state that the M23 was the car that really stamped its name in Formula One. A total of ten victories were taken with the M23, which was twice as much as McLaren's total amount of victories prior to the M23's debut. It won the constructors trophy in 1974 whilst star driver Emerson Fittipaldi celebrated the driver's championship win. Also, the McLaren M23 was the first of the iconic red and white McLarens that showcased its Marlboro sponsorship. The reason to the M23's success was the favourable weight distribution and wheel base. The car was very stable through the corners and was therefore able to use its Cosworth power in a more efficient way. If there was a car that was able to keep up with the more powerful Ferrari's, the McLaren was the one to do it. This is exemplified by a total of eight pole positions for James Hunt. Futhermore, the McLaren proved to be an excellent platform upon which the team could develop the car for multiple years. When its replacement was launched, the M26 in 1976-77, it became apparent that the M23 was still better than its eventual successor.

However exciting and dramatic the movie Rush may have been, and however exciting the world championship must have been for so many people who heard about it years after, the truth is that Niki Lauda would have won the 1976 World Championship with relative ease if he wasn’t involved in that horrific crash at the Nürburgring. Of course there is no place for 'what-if' theories. In no way is there any need for that as well, but it shows that the Lauda/Ferrari combination worked really well in 1975 and 1976. The 312T and 312T2 in the hands of Lauda and Regazzoni were difficult to beat, even for Hunt and his M23. Hunt owes every credit for sticking to Lauda like gum, to be able to take advantage of every mistake Lauda would possibly make. After Lauda’s crash, it was Hunt who took the victories to quickly close the gap. Where did the M23 came short over the 312T2? The most important fault of the McLaren was its reliability. Hunt occasionally had his issues with the car at moments that would prove fatal for his championship bid. The Ferrari was more powerful, and slightly lighter than the McLaren. McLaren did schedule the all new M26 to make its debut at the Dutch Grand Prix, but it proved to be underdeveloped and after Jochen Mass finished ninth, the car was delayed until 1977. New rules regarding the iconic high airboxes made them disappear by the fourth Grand Prix of the season. The new Ferrari was built for that, positioning the new intakes in the nose, but at McLaren they simply split the airbox in half and bent them aside, creating the recognisable look from the movie Rush, but not exactly aerodynamically proficient.

The cavalry is always late, or never shows up

Did McLaren develop the M23 so that it was on par with the Ferrari 312T2? Well, not really. As said before, McLaren did introduce the M26 at the Grand Prix of the Netherlands about three quarters through the season, but with no effect. So little, that James Hunt never took seat in the M26 out of fear it would ruin a possibly good result. Not a bad call to make, as Hunt took his old M23 to victory that race. The M23 was nearly three years older than the Ferrari, and even though this was the 70's, it was still a significant age-gap. The M23 had its advantages over the Ferrari, though. The wheelbase, for instance, was significantly bigger that its Ferrari competitor. At the launch of the 312T, the difference was a whopping twenty centimetres. Lauda noticed this difference and called to Ferrari to widen its wheelbase for the 1976 season. This would improve handling dramatically, something that Lauda demanded from a championship contending car. After a massive amount of testing, the 312T2 was introduced with a wheelbase length of 2560 mm. Still about fifteen centimetres shorter than the M23, but improved handling and made more use of the V12 powerline, bringing Lauda three victories in five races. In all it was the battle between David and Goliath. The older, less reliable McLaren against the lighter, more reliable Ferrari. Speed wise, they were never far from each other. This says a lot about Hunt's character, who took every chance he could by the throat and maximised them. In the end it gave him his World Championship, and we are glad about it. It gave us an epic fight for the title, and we can always look back on that epic drive, when Hunt took his McLaren in three laps from fifth to third, claiming the title by a single point.