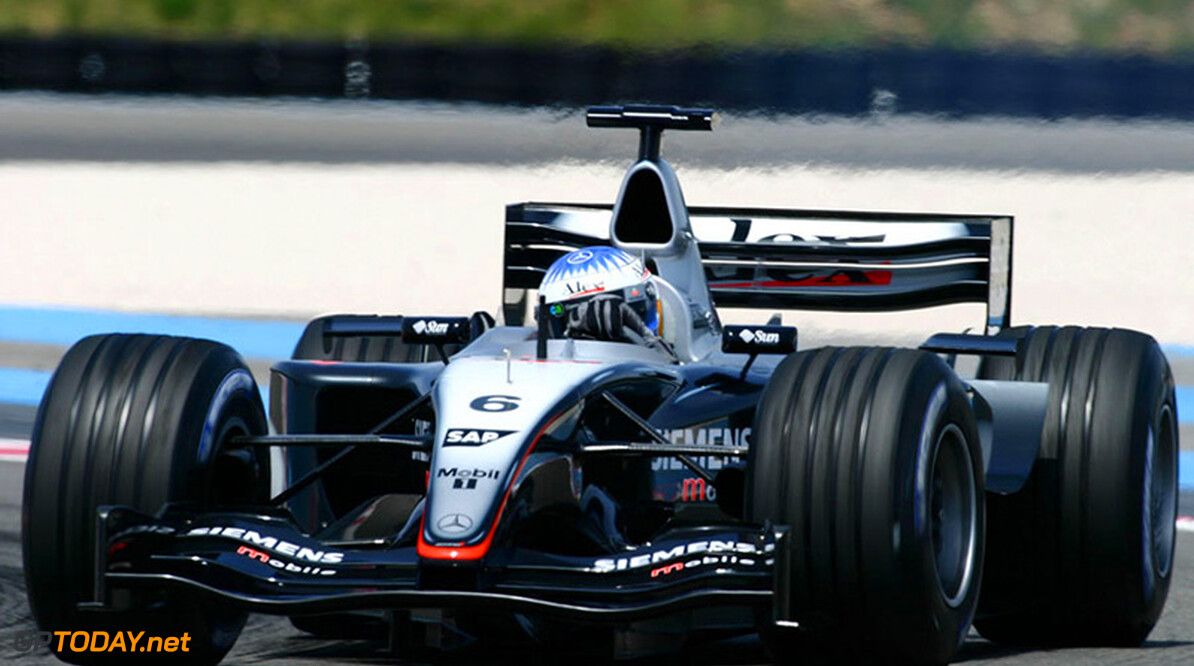 History: Even Adrian Newey can hit and miss

McLaren and mystery are two of a kind. The endlessness of McLaren's professional and clinical approach towards maximizing the efficiency of race car production is chased at in what seems a cold and humorless fashion. He who enters the facilities at Woking will plunge into the lair of a Bond villain where everything is completely odorless, the temperature is at a constant 22 degrees Celsius, and where Ron Dennis refuses to replace a broken floor tile because a new tile will never match the color of the others. Ron Dennis points to one of those tiles that - for every normal human being - wears the exact same color as all the othes, except for Dennis, "Doesn't that bug you? It bugs me, big time." What it exactly is that happens behind the doors of the Woking factory, or more specific behind the doors of their Formula One project group, will forever be a mystery to us. But I guess that goes for every constructor. After all, McLaren is a company focused upon gaining an advantage over its rivals by becoming a dominant force in a very competitive market and is not keen on giving too much room for the media to peek around their operations. This mysterious behavior can for instance be seen at the accident of Fernando Alonso in this year's winter testing. He supposedly lost conscious for a second, and voices suggest that he subdued to some electrical shocks. A weird accident that is still covered in the fog of war. We will never know, because McLaren never felt like giving us a better picture of wat happened. Maybe Ron Dennis takes the advice of quartermaster Major Boothroyd when he told James Bond to 'never let your enemies see you bleed'. Words to live by, because Dennis needed this advice in 2002 when he put his technical director Adrian Newey to work to create the most radical of Formula 1 cars for the upcoming 2003 season. Adrian Newey got carte blanche in this quest. However, when the 2003 season crossed its halfway-point, a few events would mean the end of Newey’s MP4-18 after which the fog again began to settle around the McLaren that never entered a Grand Prix.

It was in the spring of 2003 when I opened the new edition of my monthly car sport-magazine and spotted a picture of Alexander Würz driving the new McLaren MP4-18 onto the Paul Ricard track for testing. It has been well over twelve years ago, so it's design is not striking the same chord now as it did back then. However, I can assure you that the MP4-18's design was simply jaw dropping. Newey's design  gave us a look into the next five years of Formula One car designs; for some a period of favorites. In other words, the MP4-18 was an absolute beast of a car. Even the loyalist Ferrari fans on the fora's acknowledged the fact that this was one radical looking car, which says something. The cars of the late 90's and early 00's show mostly straight lines, a bit boxy looking. Slowly but surely the cars moved towards the more fluent lines that would result in the cars of the 2004-2008 period. Newey wanted to let the nose of the car have as little influence over the front wing as possible; therefore he created the iconic swan neck nose that drops massively and has the front wing placed in front of it, which was quite new. The monocoque of the car split in two behind the front wheel-suspension. Effectively, the nose went all the way up around the cockpit, while the crash structure of the side-pod started flowing separately below the cockpit. The side-pots were extremely narrow, and extremely compact. It was normal to let a huge end-plate divert warm air from the radiators over the rear wheels, therefore the side-pods were in general a big box. Newey made them much more compact. A priority that is still spearheaded by design teams today.

The MP4-18 also saw Newey attempt to create a blown diffuser by placing the dual exhaust of the Mercedes V10 under the car. A technical phenomenon which he mastered at Red Bull ten years later. Close cooperation with Mercedes-Benz lowered the overall weight of the block while they were also able to place it lower on the chassis, by which they managed to lower the center of gravity. The home-made transmission was built from a new titanium-carbon fiber composite, which was lighter than any other alternative. A newly designed suspension had to make sure that the Michelin tires would form a perfect marriage with the chassis. Ron Dennis righteously kept an eye on the relationship between Ferrari and Bridgestone, where he concluded that the design of both components were in relation to each other and therefore ensured maximum results. Dennis and Newey decided to do the same with McLaren and Michelin. This compares to the choice of McLaren to start using the Honda engine this year, knowing they will never be on a par with the Mercedes team as long as they would be a customer. Also a reason for Dennis to block any plans of Honda to provide multiple teams of their power trains. Exclusive commercial contracts ensure a maximization of efficiency. Hence Dennis' disgust for the purchase of one tile to replace another; this will never create a homogenous harmony with the existing tiles. Do you see a pattern developing here? To be honest, it's a fair argument.

On paper, the MP4-18 sounds like a hit. Very much radical, and a first step in the future of the beautiful machines of the years 2004-2008. But the thing didn't work. It has never seen the start of a Grand Prix. The car was delayed until June 2003, later to July, later again until August, and even till September before Dennis decided to write the car off for the 2003 season and started a project to develop a working version for 2004. Meanwhile, McLaren drove the 2003 season with a further developed MP4-17 from 2002. Virtually all of the aforementioned innovations caused continuous problems. The new composite transmission overheated during race simulations and melted the resin. The compact side-pots could hardly lose their heat. The blown diffuser worked fine, but Newey had no immediate response to the sudden loss of downforce when the driver backed off the throttle in corners. Thus the design team quickly decided to put the exhausts on top of the side-pods, as was normal at the time. The car was not exactly stable at lower speeds and, as a whole, was structurally weak. It failed the mandatory FIA crash tests twice. At the time, these tests were carried out while general testing was in full swing. Thus, the failure of these tests was a big slap in the face for McLaren who had to postpone the MP4-18's debut once again. Nine days before that, on Tuesday, June 17th, Alexander Würz crashed hard with the MP4-18 at Jerez. Würz had to check into hospital while the car was completely written off. McLaren issued a statement: ''Initial feedback suggests the accident was not due to mechanical failure." Ten days before Würz's crash, Kimi Räikkonen drove his MP4-18 into the guardrail as well. His statement: "I just lost control." It would be a lie to say that no one doubted this information (as with Alonso's crash). McLaren has, to my knowledge, made no statement about these crashes or on the precise reasons for the failure of the FIA crash test. All of this happened in just three weeks. That beautiful car would go down without a fight. It was not used to compete in 2003 and the developed version for 2004, the MP4-19, lacked any success.

Try building a bridge that only just stays upright

The attentive reader might have noticed that the innovations introduced with the MP4-18 by Newey show a lot of characteristics of the Red Bulls he designed between 2007 and 2015. He mastered the blown-diffuser (a phenomenon that already existed in the 90's, mind you) by letting the backfiring engine provide extra downforce in the corners. Like no other, Newey mastered the art of making the side-pods as compact as possible. It was therefore somewhat expected that he had to bring out the old scissors after the first day of testing in 2014 to give the Renault engine some breathing room. While Newey managed to develop a championship contender in 2005 that would bring the fight to Renault’s R25, the relationship between Newey and Dennis began to show some cracks. A hardly impressive 2006 brought an end to what was supposed to be a dream wedding. The MP4-18 showed that even Adrian Newey can hit a miss, but we forgive him. As Colin Chapman once said, anyone can build a bridge, but there are few people who can build a bridge that only just stays upright. The balance between the regulations and the technical potential is where the formula for success can indeed be found. It is not quite fair to say that Newey is an underperforming designer, me thinks. As for Ron Dennis: he has convinced us in a BBC interview that he was not the kind of man to sit behind his desk, watching how the world is subjected to his plans while he gently strokes a white cat that sits on his lap.