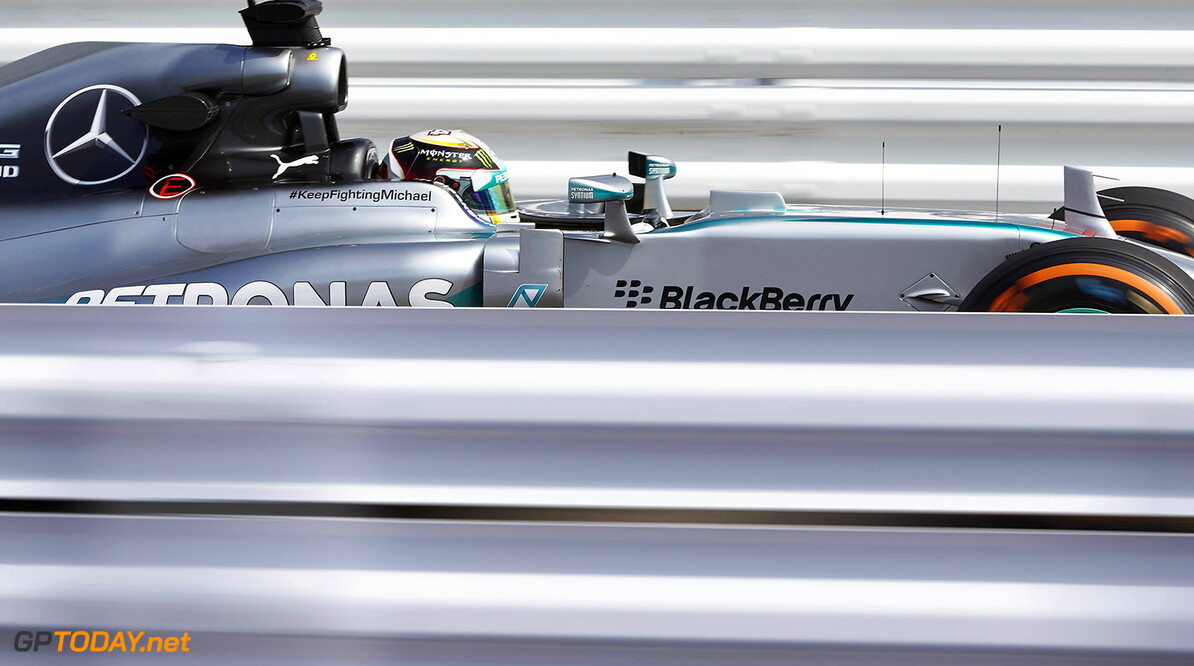 The typhoon that threatened the race start all weekend hit the circuit around ten minutes before the race start, with torrential downpours causing the race to be confirmed as starting under the safety car amid speculation.

It was the eighth front row lockout for the Mercedes team, with the two Williams' lining astern behind them. Alonso lined up fifth on the grid, with the Australian Red Bull of Daniel Ricciardo joining him.

The first victim to fall foul of the conditions was Caterham's Marcus Ericsson, who spun on the final corner and struggled to find reverse gear. His car, however, was deemed to be in a dangerous position and he received a push from the marshals, allowing the Swede to re-join the race.

After just under two laps were completed, the red flag was thrown due to the torrid weather conditions, with the likes wet-weather specialist, Lewis Hamilton complaining that he was unable to see team-mate Nico Rosberg even at slow speed.

The cars were unusually brought down the pit-lane instead of forming on the grid, it is expected this was to allow easier access to the cars for the team personnel.

An announcement was made that the race would resume at 15.25 local time, once again under the safety car.

Following the race resumption, it lasted just four corners for Fernando Alonso after his F14 T stopped on the circuit. The Spaniard, who is widely tipped to leave Ferrari at the end of the season, was understandably frustrated and it may be another factor into the double-World Champion's plans for 2015.

It look a further ten minutes, until lap nine before the safety car was brought in, by which time the track was almost under intermediate conditions.

The race got under way via a rolling start, with Hamilton leading the way with the two Williams' close behind. Drivers were still struggling for grip as Button and Maldonado dived into the pit-lane for a set of intermediate tyres, which could've proved to be an inspired manoeuvre.

Magnussen and Vettel were battling, with the German planting a move up the inside into the hairpin before going wide at Spoon and allowing the McLaren back through.

Maldonado spun off on his new, colder intermediate tyres, whilst Button was already making progress on his opening couple of laps after matching the pace of Mercedes. A flurry of drivers then entered the pit-lane for a change of tyres, with the likes of Ricciardo, Kvyat, Raikkonen and Perez all pitting. Button managed to leapfrog them all and would be a net third position by the time other drivers had pitted.

Despite the improved pace, Mercedes decided against pitting for the time being after having pace of Button and the other drivers. However, come the end of Lap 13, the majority of drivers were on the other compound of tyres and Mercedes eventually pitted Rosberg, with Marussia following after Bianchi had run as high as 7th.

It looked to be that Hamilton may get the jump on Rosberg in the pit-lane when he came in on the following lap, but the Briton went wide at Spoon after setting the fastest first sector on his in-lap, undoing his hard work.

The running order on Lap 15 was Rosberg, Hamilton, Button, Bottas, Massa, Vettel, Ricciardo, Magnussen, Hulkenberg and Raikkonen. Magnussen later pitted at the end of the lap, with an expectant slow puncture being the Dane's downfall.

On Lap 16, Sebastian Vettel made a superb overtake on Felipe Massa's Williams to take 5th place into the hairpin, with Daniel Ricciardo following suite on Lap 17 around the outside into the Dunlop Curve.

It was still the two Mercedes of Rosberg and Hamilton who had the pace on Button in 3rd, with the latter Briton's pace being matched by Vettel and Ricciardo.

The quadruple-World Champion had closed the gap on the last lap to Bottas in 4th and got past the Finnish Williams driver around the outside this time into the hairpin. Ricciardo pulled an identical move once again on the following lap into Dunlop and set about getting past Vettel for 4th.

The gap between Rosberg and Hamilton was comfortably around 1.1 seconds and the German was able to match Hamilton's pace until Lap 21, when the Briton took 3 tenths out of Rosberg's lead. Despite this, he was not able to mount a serious challenge.

Further back is where the action was aplenty however with a battle for 15th involving Kobayashi, Grosjean, Sutil and Magnussen. It looked like that Grosjean had the pace on the cars around him, whilst Raikkonen pitted and had a slow stop after problems with his front-right tyre.

Meanwhile, Hamilton had once again closed the deficit to Rosberg and looked to get up the inside into Turn 1, however Rosberg's traction was ultimately superior to Hamilton's in-spite of DRS being enabled. Once again the Briton tried down the main-straight but it was all to no avail, with Rosberg complaining of oversteer from his W05.

It was Rosberg's tyres that were at fault, with a severe lack for rear grip from his older intermediate tyres. However, the German was offered some momentary respite after Hamilton went wide into Turn 1 but again closed the gap on Lap 27, all-the-while Button got ever closer to the squabbling Mercedes pair.

Hamilton storms past Rosberg for the lead

It was the start of Lap 29 where Rosberg eventually succumbed to Hamilton's pressure. The British driver got a superb exit out of the final corner and went around the outside of his team-mate into the first corner to take the lead of the race.

The end of the lap saw Sebastian Vettel pitting for another set of intermediate compound of tyres, whilst the Mexican Esteban Gutierrez was overtaken by Sergio Perez for 10th place on Lap 30. Vettel became the guinea pig for the other drivers around him, with teams closely monitoring his pace. Button later pitted at the end of Lap 31 after 25 laps on his tyres, but encountered a problem during his stop, allowing Vettel to leapfrog the British driver.

Further back in the field, Pastor Maldonado got past Adrian Sutil's Sauber for 16th place up the inside into Turn 1. Despite not racing for points positions, the two were setting consistent pace. Meanwhile, Vettel's fresher rubber was paying dividends as he set the fastest lap of the race. Mercedes responded and pitted Rosberg from 2nd place to try and jump Hamilton ahead of him.

Vettel's fastest lap was matched by Button who was eager to make up ground on the German, with around a 1.5 second gap between the two. Hamilton was expected to pit at the end of Lap 54 but neglected to do so and with Rosberg being nearly 3 seconds quicker than him, it allowed the German to close the gap on Hamilton but not get past him, whilst Ricciardo inherited the lead as he was yet to pit.

Whilst this was occurring, the heavens opened once more, more-so in the pit-lane although it was of a light intensity. Ricciardo pitted after being held up in traffic, including Magnussen unlapping himself in the McLaren. He rejoined the race in 5th, behind Hamilton, Rosberg, Vettel and Button.

Lap 38 saw Vettel going wide into the Esses and taking a trip across the gravel, with other drivers including Magnussen and Vergne also going wide, with the rain intensity slightly increasing. Ricciardo had closed the gap to Button and went up the inside into the hairpin once more, but went too deep on the brakes, allowing Button to get past on the exit of the corner.

DRS was disabled due to the increase in rain intensity at the start of Lap 41, and the duo of Ricciardo and Button continued to squabble for position. Team-mate to Button, Kevin Magnussen took a gamble and pitted for wet-weather tyres in an attempt to undercut the field, however he would be heavily relying on the conditions to worsen.

They continued to do so as Sutil slid off the track and into the barrier at the Dunlop curve, as Button responded and boxed for wets. The safety car came out following Sutil's demise and many drivers opted to change tyres, however it was Button who was caught out and ended up losing track-time and position over his rivals.

The second red-flag of the afternoon

It was an incident at Turn 15 that involved Jules Bianchi causing the second red flag of the race to be thrown. An ambulance was deployed on circuit to take the Frenchman to the the Medical Centre, with no news on his medical condition.

It was announced that the race would not be restarted following Bianchi's crash, declaring Hamilton as the first-time winner of the Japanese Grand Prix. Rosberg claimed 2nd place and Vettel bagged the final podium position in 3rd, Ricciardo was just behind him in 4th, Button was 5th. The two Williams' of Bottas and Massa were 6th and 7th, Hulkenberg was 8th, Vergne 9th and Perez 10th.

Kvyat scored a well-deserved 11th place whilst Raikkonen disappointingly finished outside the points in 12th. Gutierrez was 13th, Magnussen's gamble didn't pay off and he was 14th with team-mate Maldonado right behind him. Ericsson finished ahead of Kobayashi and Chilton.

This meant that Hamilton increased his lead in the Championship on Rosberg by winning the race, with the Briton now being 10 points ahead of his rival.

The main concern for the drivers was regarding Jules Bianchi's welfare, and as it was unknown at the time, no champagne was sprayed on the podium as a mark of respect for the Frenchman.

The next stop in the Formula 1 circus will be in Russia at the brand new Sochi street circuit,we look forward to your company throughout the weekend.

We also intend to keep you as updated as we can with any news that we receive regarding Jules Bianchi's current condition.