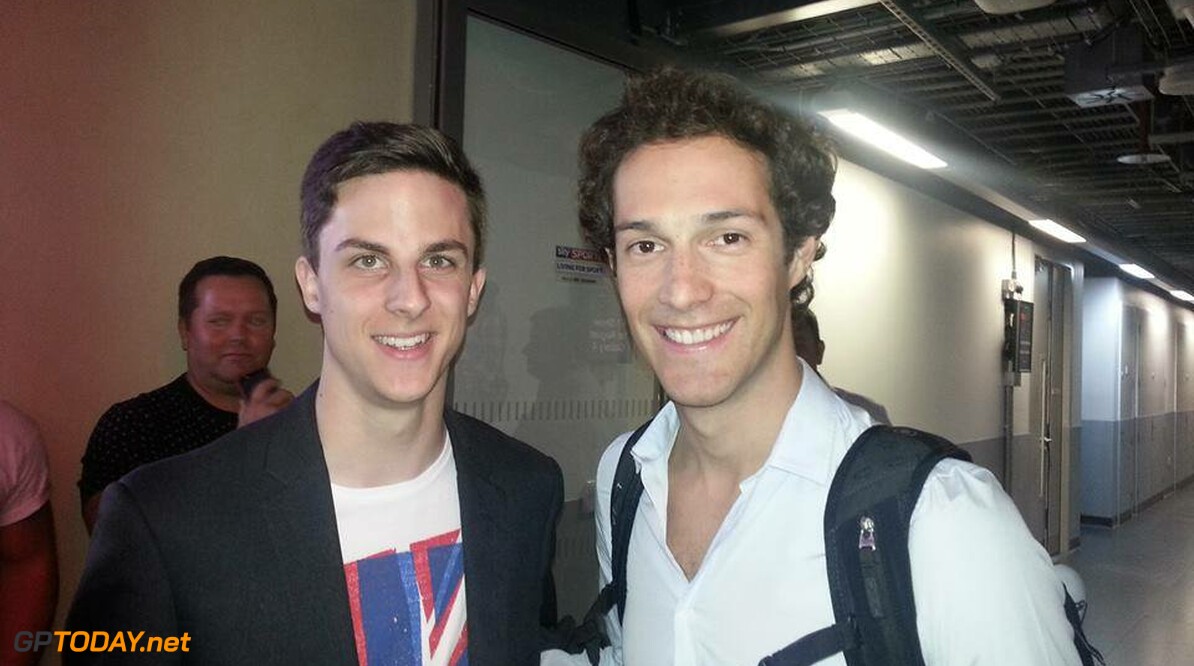 Tom Brooks: My trip to The F1 Show

On Friday I went along to Sky Studios to be a part of the audience for Sky Sports' 'The F1 Show'. The guests were John Watson and Bruno Senna, both of whom I interviewed. But here's what happened.

I came about the tickets through a mutual friend of a friend, who is an amazing Motorsport artist called Colin Carter. The chap in question posted on Facebook that he had a spare ticket to be a part of the audience for The F1 Show that Sky Sports produce. Naturally, I seized the opportunity and said that I would have the spare ticket and sort out my own travel arrangements and meet him at Sky Studios on the Friday.

Now, it had been a rough week following the passing of a dear friend and colleague as well as a family member being rushed into hospital and my motorcycle biting the dust, so I was in two minds whether or not to go, but I am glad that I did.

I decided that the train from where I live in Ramsgate would be the easiest and more than likely most cost-effective method of getting up there and it only took just under three hours, so all was good.

I got on the train on the Friday to Victoria armed with everything that I would need for the afternoon and evening ahead. Then I caught my connecting one to Clapham Junction and from there I went to Syon Lane, which is around a ten minute walk to the studios.

My train to Syon Lane arrived early and I had to wait around to meet the chap that I was going with, who was called Col. Eventually he arrived, we parked the car and went to the gate where we were greeted by some of the Sky Sports F1 team who interviewed a few of us (myself included) for use in the show.

Afterwards we were shown into the waiting area, which included some light refreshment and a large television showing some F1 programmes.

We waited around an hour, which was bloody handy as I needed to recharge my phone following the days events up until that point. Much to my surprise, we were allowed to bring them into the studio with us, providing that they were turned off.

So, we were taken out of this building and directed towards the studios which was a bloody great towerblock of a thing, fortunately the studios in question were based on the ground floor, so we checked in our bags and queued up before we were shown in and put into different sections. Rather fortunately I was in the section that was towards the back, so I had a perfect view of the presenters (Natalie Pinkham and Ted Kravitz) as well as John Watson and Bruno Senna who were guests.

There was a quick pre-recorded part that needed to be done involving Natalie and Ted who had to introduce the show, so we all turned around and faced the camera that had the auto-cue. There was a dry run before the recording, which was very amusing as they both made a few slip-ups but joked about it.

After that was done, we had to turn around yet again and were introduced to Bruno and John before the show went live, both of whom we applauded.

The presenters got into their positions and the VT's ran before they cut to the studio. After the first half, we all had to move around towards the back wall as they decided to chat on some high-rise stalls, where Bruno took a photo of us before the break ended.

The show continued and Watson's insight into various different parts about Formula 1 in 2014 was absolutely fascinating, not taking anything away from Bruno of course, but the knowledge that they both shared was utterly superb and it was lovely to see the difference from a retired racer to a more current Formula 1 driver.

After the chair interview section, there was another VT where Yours Truly was featured during that pre-show interview that I mentioned earlier. It was only briefly discussing about who I thought was better out of Nico and Lewis and Sebastian and Daniel, but it was fun nonetheless.

There were a few questions from the audience throughout and I wasn't featured sadly due to only receiving the details at the last minute. Next time, perhaps.

Once the show was over, we were all ushered out of the studio and had a short wait in the foyer before the presenters and guests arrived to sign some photographs and have some photos with the fans (myself included). Bruno was first out and I was there ready and waiting with a copy of the 'Senna Forever' edition of the F1 Racing magazine, which he happily signed. I then chatted to him whilst he posed for a few photos and asked him for an interview once the crowd had died down, to which he accepted, thankfully.

Next out was Natalie in some ridiculously large high-heels, presumably because she's not the tallest of people. Again, I was one of the first to get a photo with her, despite it being rather dodgy as my camera decided to play up, but I also got a hug off of her, so that was nice!

After that, I had noticed that both John Watson and Ted Kravitz had sneaked in through the back and were happily chatting to the public. I went over to John first and fired up my dictaphone just the gauge an idea of what he was talking about, it was a tad rude if anything, I will admit.

I then decided to go back over to Bruno to try out this interview as the crowd had died down somewhat, he agreed that now was a good time and we went ahead with it, and I have to say that he was just such a nice chap, very approachable and friendly also.

I then made my way through the crowd and wandered over to Ted who was having a few photos taken and chatting about the show. I turned my dictaphone on again and decided to see what was what. However, he saw me and looked over and made a rather humorous noise before moving away slightly. I really thought that I had buggered things up there!

So, I popped back over to John who was still merrily chatting away and asked him for an interview, which he duly and rather happily accepted. We chatting about a few things regarding technical regulations and Formula 1 both historically and currently.

By this point, time was cracking on and I still had to make it to Victoria by eleven-ish to catch the train back to Ramsgate. The crowd was really beginning to thin out now and both Natalie and Bruno had left, the former of which you can hear in my Watson interview. It ended up being just myself, Col and Ted as John had to get back also. I shook his hand and thanked him for his time.

I apologised to Ted for popping the dictaphone under his nose, and then told him that I would like to interview him, to which he replied “Why don't you give me a ring some time, and we'll do it properly?” He also said “I'll give you my email address and we'll sort it out.”. Rather embarrassingly, I didn't have a pen and paper to hand, which he joked about.

I went on to tell him more about the Radio Station that I work at and also told him that I wrote for a Formula 1 news site called F1Today.net, to which he said “Ah yes, I know the one, with that little guy who comes to testing!”.

We shared a few more light-hearted remarks before I eventually decided that I should really get going. I again thanked him for his time and told him that I looked forward to the interview.

I left the building along with Col and shook his hand, thanking him for the opportunity. I walked back to the train station, and got on the next train from Syon Lane to Clapham, which I accidentally got on in First Class, but thankfully it was rather late and no-one said anything.

There was a short wait at Clapham due to train fault, but I made it back to Victoria with a 45-minute wait as I had missed the 22.23 by just a few minutes. Far from the end of the world as I was rather peckish and grabbed a bite to eat.

The train journey home was rather mundane, if cramped at first. Although, I was happily listening to some music at the Whitstable stop before a drunken woman got on-board and stayed there until Herne Bay, it wasn't long, but she was bloody deafening even with my music up at full volume.

Rather irritatingly it decided to rain just as I was approaching my stop at Broadstairs (I know what you're thinking, I got off two earlier as I was staying the night at my Fathers). So, I walked home at around 01.25 in the morning and got absolutely drenched as I thought that it would be nice enough to warrant not bringing a coat. That'll teach me!

All in all, I had such a superb day and met quite a few nice people along the way and made a few friends. I would do it again in a heartbeat, hopefully the opportunity comes around again.