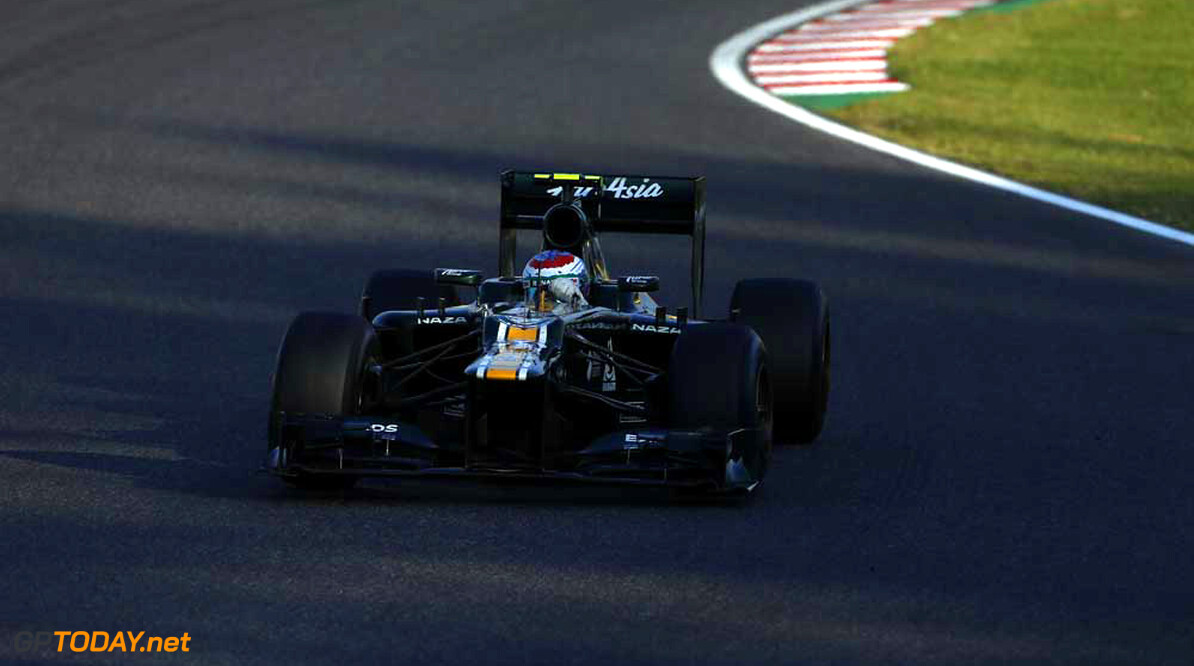 Giedo van der Garde (driving FP1 in Vitaly Petrov's car): "I'm looking forward to my second FP1 in a row in Korea after driving the first Friday in Suzuka. The Korean track is another new circuit for me so I've spent quite a lot of time at home on my own simulator to get used to the layout but you never really know what its like until you actually get on track."

"It looks like it's a pretty technical circuit and one that will take a few laps to find all the right braking points and apexes, especially as a couple of the corners are blind, but it'll be fine. The plan for Korea is the same as Suzuka  run through the program, minimise the mistakes and get the job done for the team."

A lap of Korea with Heikki Kovalainen: "The start / finish straight is pretty short and then it's into the second gear turn one. It's very tight and you need a good exit to make sure you go onto the first long straight with as much speed as possible, using KERS to really push you out of the corner and towards T2. Braking into turn 3 is pretty straightforward  it's another second gear corner and you want to come out of there with as much speed as possible so you're using another big chunk of KERS and DRS to power your way out."

"Turn four is almost 180° so it's down to second or even first gear, depending on the balance of the car. If you have a really strong front end you may be able to get through in second, otherwise you need first. Turns five and six are a bit fiddly, still in second, but then the speed builds as you go uphill through turn seven and you stay flat out through eight. It's a really quick section of the track, you lift a little in nine, carrying as much speed as possible as you very quickly arrive in the braking zone for turn ten."

"For turn ten you go quickly down through the gears to first and it's not so important to get on the power early, it's more about carrying speed through the middle and exit of the corner and then it's on to turn 11, a double apex left which you go into in fourth and then flick down to third as you head towards turn 12."

"12, 13 and 14 are a sequence of right / left / right corners, all medium speed, third or fourth gear and you need to make sure you have the right line out of them for turn 15. 15 and 16 are almost one corner but you have to avoid a pretty heavy kerb in 16 so you can get on the power and stay on it through 17 and 18 and back on to the start line."

Thoughts on Korea from Vitaly Petrov: "I like Korea. The first time it was on the calendar was in my first year in F1 and when I got there I was really surprised to see so many Russian flags in the stands. It was the same in 2011 and I'm sure it'll be like that again in 2012 and its always good to race in front of so many fans from home."

"The track itself was a pretty tricky one to learn when I first went out on it in 2010. There's a few blind apexes and correct gear selection is really important to get the quickest laptimes, but now we've done a couple of races there we know what direction we need to take on setup so we can get on with it as soon as we arrive."

"In the race itself there's a strong chance of safety cars during the race, both races so far have seen safety cars, so we need to be prepared for that. We know we don't yet have the pace to really fight with the cars ahead but we need to be ready to take advantage of whatever happens in front of us, and perhaps this is the sort of race where we can do that."
F1 News
<< Previous article Next article >>
.