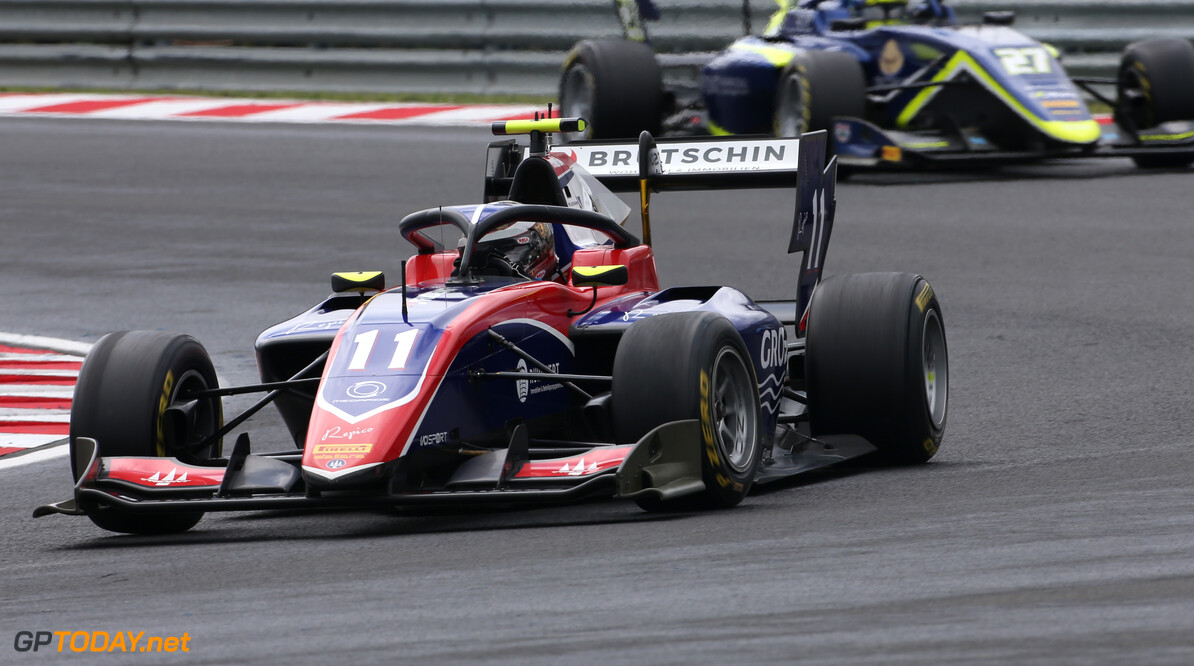 Trident's David Beckmann took the win this morning at the Hungaroring ahead of Oscar Piastri after penalties denied Bent Viscaal of his first victory in F3. Hitech's Dennis Hauger finished the race in third.

As the race started under wet conditions, Beckmann had a perfect start from pole position, as Hauger moved past Clement Novalak for second place. Hauger challenged Beckmann for the lead through turn two, but could not get past the Trident.

Haugermanaged to move into first on lap two, after a confident move around the outside to move ahead of Beckmann. Contact between Viscaal and Igor Fraga caused a spin for Fraga at turn twelve as well as retirement for the Brazilian driver, as HWA's Jake Hughes spun at the following corner, briefly bring out the fellow flags.

Aleksandr Smolyar was on the move early on, showing his pace in the wet from Friday's qualifying, having moved up thirteen places in five laps to fourteenth. Despite losing out to a fast-starting Hauger, Beckmann started to close the gap to the Hitech.

It was once again a bad day for Liam Lawson, being forced to stop at turn two as his Hitech lost power with a suspected engine failure, bringing out the safety car. The race quickly resumed on lap ten, with Hauger having a great restart, while Viscaal managed to move past Sargeant and Verschoor for fourth.

Logan Sargeant and Richard Verschoor finished fourth and fifth, while yesterday's winner Theo Pourchaire finish sixth, ahead of Smolyar, who made up twenty positions to finish seventh.

With promising pace from the Dutch driver, Viscaal then took third off Novalak. However, Viscaal was then awarded a five-second penalty for the earlier collision with Fraga. Novalak was relegated to seventh after the Prema's of Sargeant and Oscar Piastri as well as Vershoor, complaining of having no grip on track.

Viscaal pushed hard to take second from Beckmann and continue to move up the order with the penalty, taking the lead from Hauger at the end of lap thirteen. Prema's Frederik Vesti saw a second retirement of the weekend after slight contact with Hughes broke his front suspension.

Viscaal was put under investigation for a second time for an earlier incident with Sargeant as he continued to build a gap to Hauger. Both Beckmann and Hauger were lucky not to spin coming through the final corner as contact between the pair saw both drivers lose traction in the corner, as Beckmann took second.

Having cleared Hauger, Beckmann pushed on to close down to Viscaal, only needing to finish less than five seconds behind to take the win with Viscaal's penalty. Hauger then dropped to third on lap eighteen as the Norwegian driver looked to struggle in the closing laps.

Viscaal was then given a second five-second penalty for the incident with Sargeant, having run off the road while overtaking the Prema. Only being six seconds ahead of Beckmann, he would not take the win.

To add further disappointment for Viscaal, an accident Federico Malvestiti brought out a second safety car, closing down the field and taking away Viscaal's strong efforts. Jack Doohan suffered a puncture on the penultimate lap to also drop him down the order.

As the race ended under safety car conditions, Viscaal crossed the line, but it would be Beckmann that would take the victory, with Piastri in second and Hauger in third. Viscaal would eventually finish seventeenth with the penalties and the safety car closing the field up.

Sebastian Fernandez and Enzo Fittipaldi took the chequered flag in eighth and ninth, while Alex Peroni took the final point in tenth.