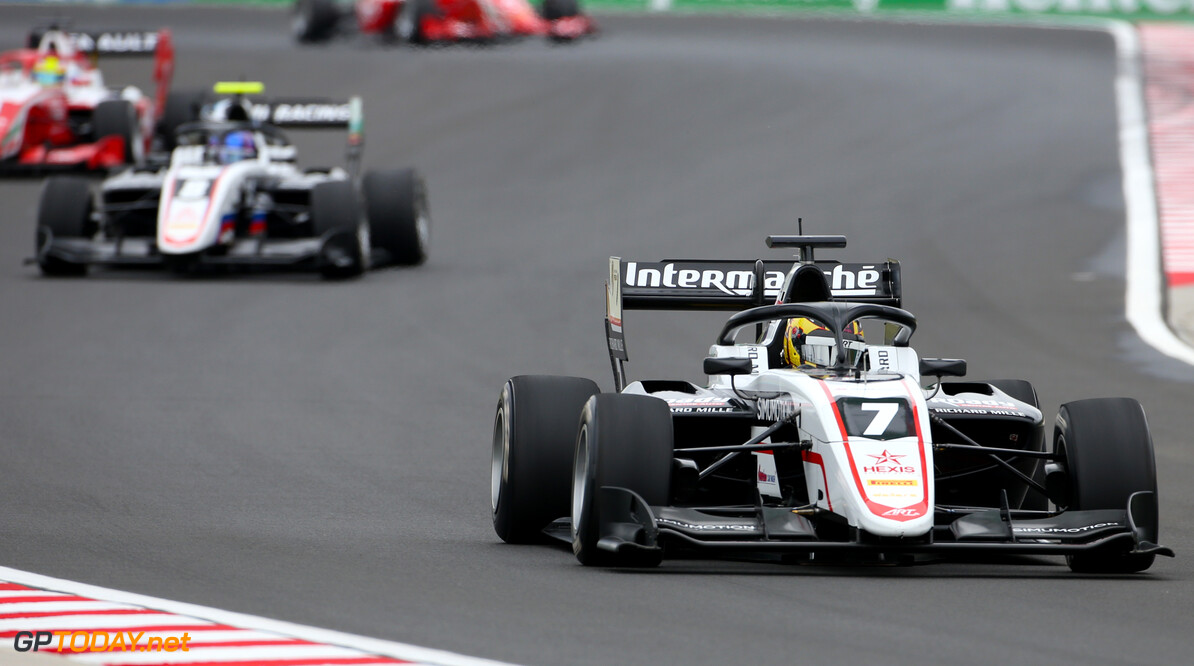 It was a convincing victory for ART's Theo Pourchaire this morning at the Hungaroring, in front of second-placed Oscar Piastri by over ten seconds after a dramatic first corner incident involving pole sitter Alexsandr Smolyar and third-placed Logan Sargeant.

Poleman Smolyar had a good start on the damp circuit but would not get past the first corner after contact with second-placed Sargeant, who lost control and hit the ART of Smolyar.

The contact triggered a safety car as a number of cars hit each other coming through the corner. Calan Williams was spun in the first corner, hitting  Frederik Vesti while Olli Caldwell also got caught up in the chaos.

The race resumed at the end of lap two, as Pourchaire became the new leader from the Prema's of Piastri and Sargeant. Liam Lawson mounted a charge on Sargeant's third-place at turn five, pushing the American wide in the process, but could not find a way into third.

Lawson narrowly avoided an accident at turn one after a lock-up from Sebastian Fernandez behind saw a brief scare for the Hitech. However, Lawson then instantly retired with a spectacular engine fire, stopping the Kiwi driver at turn two and bringing out a second safety car.

Drivers were instructed to keep to the right of the circuit through turns one and two after oil was deposited on the circuit from Lawson's smouldering Hitech. The red flag was then brought out, temporarily suspending the race to deal with the issue at the two corners.

During the red flag, Jack Doohan and Lirim Zandeli were put under investigation as the pair made contact through turn four during the opening laps, putting Doohan out of the race.

Bent Viscaal and Richard Verschoor finished in fourth and fifth, while Fernandez and Alex Pironi crossed the line in sixth and seventh.

No further action was taken on the drivers involved in the first corner incident as the race eventually got back underway over thirty minutes later. Pourchaire led from Piastri and Sargeant on the restart, as Enzo Fittipaldi passed both Max Fewtrell and Peroni through turns two and three.

Fittipaldi was then handed a drive-through penalty for leaving the fast lane in the pits under the red flag, while Caldwell and Jake Hughes were handed five and ten second time penalties respectively for speeding in the pit lane.

Roman Stanek was then handed a drive-through penalty for being ten car lengths away during the safety car restart, while Matteo Nannini also received a five-second penalty for speeding in the pit lane.

Fernandez once again almost ended his day with a collision after a slide coming out of the final corner, but he managed to hold the ART on track. Pourchaire began to pull away from Piastri, managing to gain a gap of 2.5 seconds with ten laps remaining.

Pourchaire took a second straight victory with a lead of twelve seconds from Piastri and Sargeant, while MP Motorsport's Viscaal took his best F3 finish in fourth ahead of teammate Verschoor.

Eighth and ninth went to Dennis Hauger and Clement Novalak, who managed to make up seventeen positions over the race. David Beckmann took tenth and pole for tomorrow's reverse grid race.