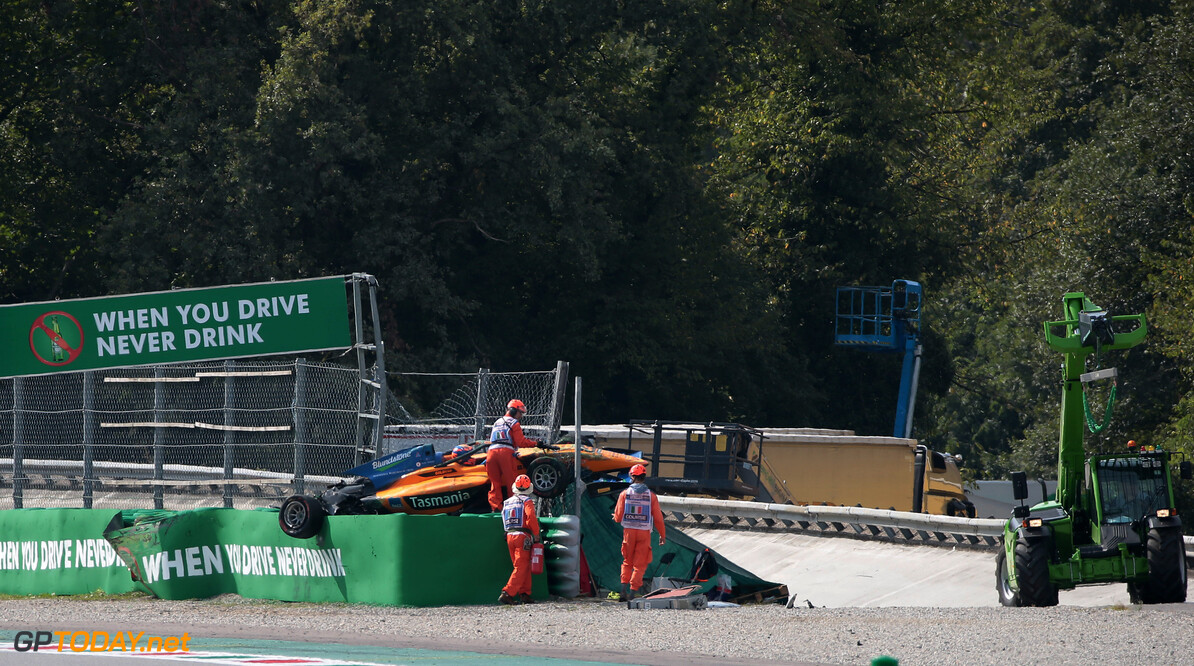 Peroni was knocked out in horror F3 crash

Alex Peroni says he doesn't remember his massive Formula 3 crash at Monza over a week ago after he was knocked out in the accident.

Peroni walked away from the crash and returned to Tasmania over the weekend after suffering a fractured vertebrae when he was lifted into the air by a sausage kerb before coming down hard on the barriers.

The 19-year-old will miss the final round of the F3 season in Sochi, and is not likely to feature in the Macau Grand Prix later this year as he continues his recovery.

Peroni says he was "lucky to walk away" from the incident, as it occurred just one week following the fatal crash of Anthoine Hubert at Spa-Francorchamps

"I was knocked out during the crash so I don't remember it, so to try and put myself in that place is really weird and that's why I guess I'm not that traumatised by it," Peroni stated.

"Especially after the events that happened the week before with Anthoine Hubert... I was very lucky to walk away.

"I'm happy to be home obviously but you know it's a pretty bad way to end the season to have that crash so just looking as far ahead as I can."

His father Piero says that Alex's mind was immediately on racing once more after the crash, as he pondered if the car would be ready to race at Sunday's Sprint Race while he received treatment in the medical centre.

"When he was in the clinic and the doctors were looking after him and this was on the track, the first thing he said to me was 'will they be able to fix the car for tomorrow's race?'" Piero Peroni said.

"So if anything he's actually more determined than before because it's not how he wanted to finish the season."

Peroni senior added that there is a valid argument for the sausage kerbs to be placed around circuits but doesn't think the Parabolica corner where his son had his accident is a suitable place.

"I think there is a place for those kerbs, probably on a 250 kilometres per hour corner isn't the place for one but there's definitely an argument for them," he said.

"At the end of the day there has to be something, there'll be either gravel, there'll be grass. Gravel was removed because it used to slow cars down but sometimes they'd dig in and roll. But maybe rolling is better than flying?

"I'm confident that it will be evaluated appropriately and we'll see what the outcome is."