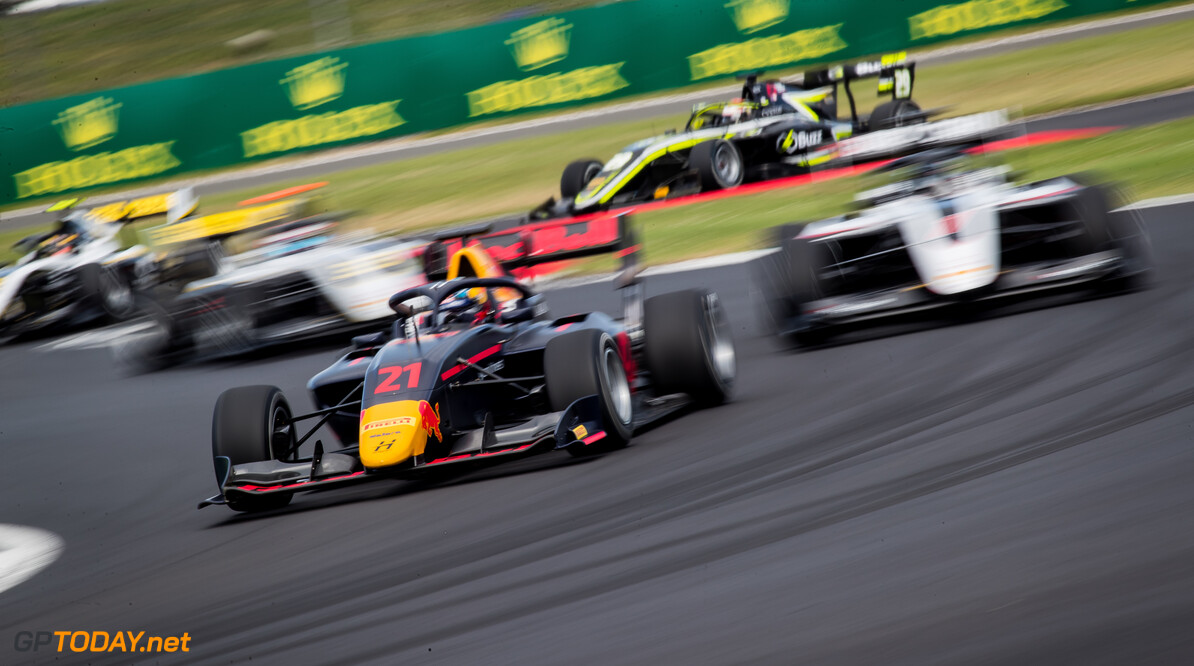 Juri Vips has made it back-to-back Feature Race wins in Formula 3, managing to hold off an assault from Jehan Daruvala and Marcus Armstrong in the Prema's.

Vips got away well, covering the inside, however, it wasn't the same story for Marcus Armstrong who fell to fifth in the Prema. Christian Lundgaard charged for ART, attacking Daruvala into Copse as well as the Maggots, Becketts section.

Yet, he was forced to back out of it, allowing Pulcini through, only for the Dane to storm back through into Vale  - allowing Armstrong back past Pulcini in the second Hitech.

Daruvala then began to stalk the race-leading Estonian, as he piled the pressure on,  setting the fastest lap of the race in the process as the gap remained at less than half a second as the leading duo continued to check out.

Trident's day then went from bad to worse as Niko Kari was collected by Logan Sargeant into the left-hander at Brooklands.

Prema told Daruvala to push on lap six, as the pressure continued to mount on Vips. Armstrong then produced a superb move, going around the outside of Lundgaard at Stowe, before holding the inside into Vale to bring himself into contention.

Newcomer Federico Malvestiti retired in his Jenzer with apparent mechanical problems on the International pit straight. Thus, bringing out the virtual safety car in the process.

As the virtual safety car was withdrawn Vips launched, gaining time on the chasing Daruvala. Armstrong produced something similar to move out of range for Lundgaard, Leo Pulcini and Robert Schwartzman.

Daruvala then got as close as he had yet into Stowe, but Vips held his own. While Lundgaard repelled Pulcini and Schwartzman into Vale.

Daruvala attempted two overtakes in two laps into Brooklands, but the Red Bull-backed driver held on. This caused the two Prema's to run side by side through Woodcote and down the National pit straight, but Daruvala held the inside into Copse and retained the position.

The safety car was then brought out by the Charouz of Raoul Hyman, who had a high-speed shunt into the legendary Copse corner. This gave Vips a much needed reprieve from the Prema pressure.

Once again, Vips' restart was perfect, dropping Daruvala. While Armstrong struggled to make up ground and was left looking in his mirrors at Pulcini in the second Hitech.

Pedro Piquet in the final Trident seemed intent on taking sixth from the championship leader - Schwartzman. As Jake Hughes in the HWA mounted the pressure on the youngest driver in the field Liam Lawson in the battle for reverse grid pole.

Vips then broke DRS for the first time, setting the fastest lap of the race in the process to leave Daruvala under pressure. However, the Indian driver then managed to produce a superb final sector to apply the pressure firmly on the Estonian driver.

Schwartzman then managed to gain some points back on his title rivals, as he breezed past Lundgaard in the ART down the Hangar straight. Lundgaard's struggles looked set to continue with Piquet now pressuring the ART for sixth. He produced a great move, sending himself around the outside of Lundgaard into Stowe.

But there was no beating Vips. The Estonian was inch perfect all race, allowing him to make it two wins this season. The Prema's of Daruvala and Armstrong rounded off the podium. Meanwhile, Pulcini scored his best result of the season in fourth.

Schwartzman produced a low-key drive to fifth, just ahead of the Trident of Piquet, as well as his Barcelona rival Lundgaard in seventh.

Liam Lawson will find himself on reverse grid pole for Sunday's Sprint race, as he held on against the HWA of Jake Hughes, who claimed ninth. Australian Alex Peroni rounded out the points for Campos