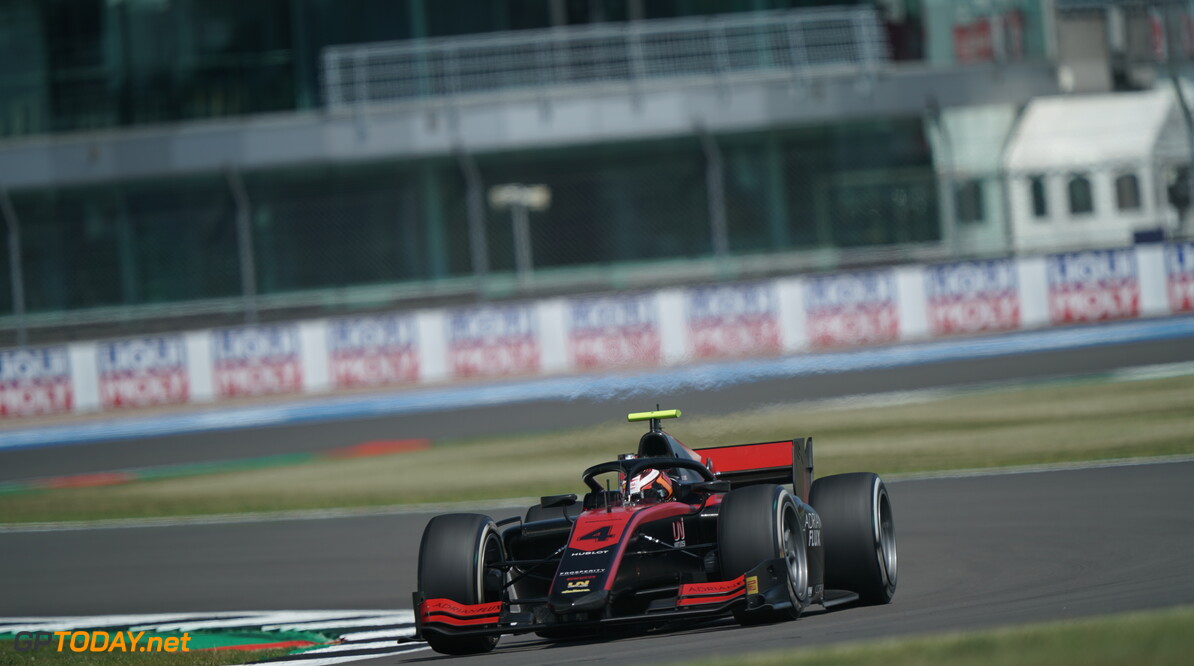 Top honours were taken by the Uni-Virtuosi of Callum Ilott, who took the chequered flag this afternoon ahead of Christian Lundgaard. Campos' Jack Aitken rounded out the podium in third place.

Ilott led away from pole as Ticktum moved up to second, as Lungaard dropped down to fourth on the start. Further down, Guilherme Samaia went into the gravel at Luffield but kept going, as Pedro Piquet stalled on the grid.

Yuki Tsunoda made gains from the battle between Felipe Drugovich and Guanyu Zhou for tenth, moving past Drugvoich as he ran wide at Copse. Under pressure from Lundgaard behind,

Ticktum ran off the road at Chapel, succumbing to Lundgaard and relinquishing second place in the process. Schumacher would push his old Euro F3 rival further down the order, as Dicktum moved down to seventh behind Nikita Mazepin and Louis Deletraz.

Lundgaard pitted from second on lap six, with Jack Aitken and Ticktum behind. A slow stop for Hitech pushed an already struggling Luca Ghiotto further down the order.

A perfect stop for Ilott and the Uni-Virtuosi team saw the British driver return to the circuit ahead of Lundgaard, as Schumacher and Mazepin duelled for the lead on the alternate strategy.

Mazepin and Deletraz finished this afternoon's sprint race ahead of Tsunoda and Schumacher.

Ilott moved up through the field after his pitstop, recovering to eighth and sixteen seconds behind leader Schumacher at the halfway mark. He soon caught and passed Roy Nissany for seventh.

Charouz driver Deletraz pulled a brave move around the outside of Vale to pass a recovering Ticktum, as Dams teammate Sean Galael made his third visit to the pits, Ticktum voicing his anger at Deletraz's move over team radio.

Lundgaard suffered with his front left tyre with ten laps to go, as the tyre appeared to grain badly. Schumacher eventually pitted at the end of the lap, as Mazepin opted to go for another lap before stopping.

Mazepin pitted on lap 22, handing the lead back to Ilott as Schumacher got past Ticktum for seventh as he made his way back up the grid on the softer tyre.

Mazepin then stole sixth from Schumacher on the run into Stowe with a committed move into the corner, putting a wheel on the grass as he passed the German.

Lundgaard went off the circuit at Brooklands, narrowly avoiding a spin with his worn tyres, but he held on to the car and returned to the circuit still in second place.

Ilott came home to take the victory almost ten seconds ahead of Lundgaard, while Mazepin recovered to take fourth.

Prema's Robert Shwartzman took eighth and will start in pole position in tomorrow's race despite losing the championship lead to Ilott, as zhou and Drugovich finished in ninth and tenth.

Ticktum eventually ended the race barely hanging on to fifteenth position, a day to forget for last weekend's race winner.