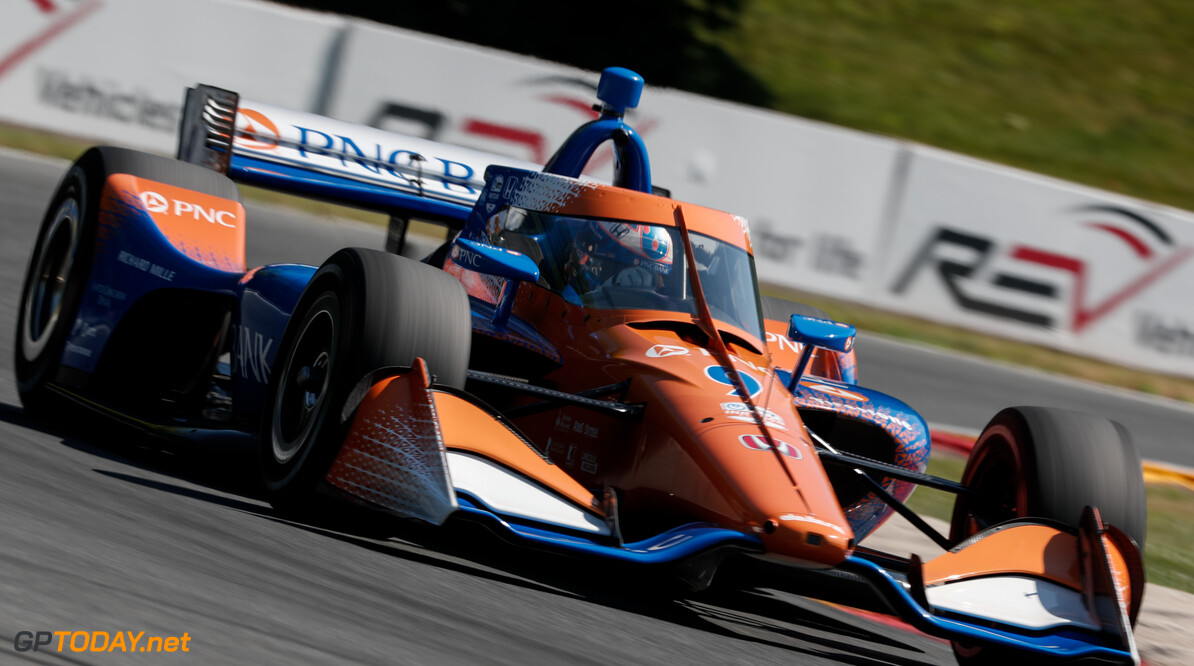 Chip Ganassi's Scott Dixon continued his winning streak as took the victory this afternoon during the first of two scheduled races this weekend at Road America, with Will Power finishing in second and rookie Alex Palou coming home in third.

It was a good start for Ryan Hunter-Reay as he jumped Jack Harvey for second as the circuit went to green, Graham Rahal also found a way around Harvey to relegate the British driver to third.

Santino Ferrucci and Power made contact on the first lap, with Ferrucci being forced onto the grass on the entry to turn four.

Further down the order, Rinus Veekay pulled a stellar move on Simon Pagenoud around the outside of the carousel for fourteenth but fell back behind Conor Daly.

Alexander Rossi had a major moment near the end of the first lap as he crashed through an advertising banner after going off the circuit, with Marco Andretti also picking up a part of the banner on his front wing. Rossi was forced to pit to remove the banner off his wing as did Andretti.

Andretti was forced to deal with more trouble after receiving a penalty for speeding on pit road, while on lap eight, Rahal got past Hunter-Reay for second as the Andretti driver briefly went wide at turn four. Colton Herta was quick to benefit from Felix Rosenqvist's slide through turn one as he took seventh from the Swede driver.

Ferrucci took third from a struggling Hunter-Reay after pulling a dummy on the Andretti into turn four, pushing Hunter-Reay wide as he claimed the place.

Power was the first of the frontrunners to pit on lap 13, followed by Pagenaud. Race leader Newgarden then pitted for the harder black compound tyre the following lap.

Rahal suffered a disastrous stop on lap 15, after a fuel rig issue greatly delayed his stop, dropping him down the order.

Hunter-Reay and Herta finished the race in fourth and fifth, while Ferrucci and Rahal took the chequered flag in sixth and seventh.

At the halfway point of the race, Newgarden led from second-placed Ferrucci, as championship leader Scott Dixon became the first driver on the grid to take a second pit stop on lap 25, with a number of drivers pitting on the following lap.

A long stop for Palou left him vulnerable to a recovering Rossi, the Indy 500 champion squeezing past at turn four. Leader Josef Newgarden took a major blow to his victory chances after stalling twice while trying to get away from his pit box.

Dixon and Power came close to contact throughout turns four and five as the pair jostled for fifth, with Power eventually wrestling the place from Dixon. leaving both cars vulnerable to Ferrucci behind.

The first yellow of the race came out on lap 38, as Harvey ended his race after a slide sent him into the gravel and into retirement. Harvey would later reveal that the slide was caused by a rear brake lock.

Ferrucci dropped places after near contact with Dalton Kellett, while Dixon managed to jump Power on pit road.

Andretti ended his troublesome day early after a loss of power forced him into retirement with fifteen laps to go. as Rosenqvist also was forced to pit with engine issues.

As the race resumed, Newgarden and Ferrucci battled for sixth. A second yellow came out almost immediately after contact with Pato O'Ward sent Daly spinning into the barriers. Daly complained of shoulder pain after the incident.

After suffering a big lock-up during his battle with Ferrucci, Newgarden was forced into another pit stop, dropping him down the order for the restart. Dixon held on for the restart as Palou pulled a brave move into turn one for third before being re-passed by Hunter-Reay.

A fourth yellow was then deployed for Kellett's AJ Foyt car, which was stricken in the turn fourteen gravel. Palou grabbed third from Hunter-Reay once again on the restart and set after second-placed Power.

Pagenaud and O'Ward made contact coming through turn four, as a late defence from Pagenaud saw him hit the side of O'Ward's McLaren and go wide, losing a position In the process.

Rossi suffered yet more anguish with four laps to go after contact with Max Chilton broke the steering on Rossi's Andretti, becoming the fifth retirement of the race.

However, Dixon would remain unchallenged and take his third successive win this season out of three races, a feat he had not managed in his career until now.

Eighth and ninth went to O'Ward and Takuma Sato as Marcus Ericsson crossed the line to round out the top ten, after spinning at Canada corner on the final lap.