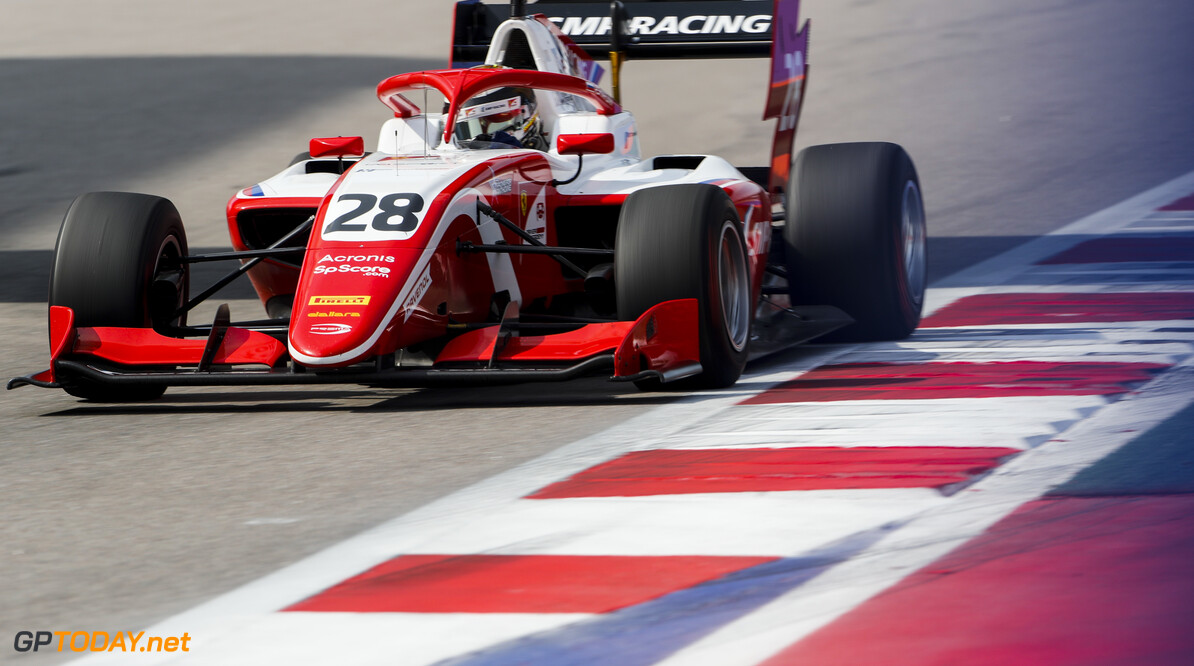 Prema's Marcus Armstrong has won the Feature Race in Sochi, while Robert Shwartzman wins the F3 title with his second place finish, in a race that was hampered early on by changeable wet conditions. Niko Kari rounded out the podium in third.

Championship contender Shwartzman led from pole position on his home circuit, as rival Johan Daruvala dropped down the order from second off the grid. Prema teammate Armstrong pressured Shwartzman on the run to turn two, taking the lead from the Russian driver.

A spin on the end of the first lap ended the day early for HWA's Bent Viscaal as the Dutch driver ended up in the barriers, bringing out the virtual safety car. The incident prompted pit stops from some drivers as the rain started to come down.

Jenzer's Leong Hon Chio was the next driver to end his day in the barriers as the Macanese driver went wide and into the barriers at turn two, in turn bringing out a full safety car. Armstrong reported rain on one end of the circuit, while the other side was dry, making conditions very difficult for drivers.

Fourth went to Hitech's Leonardo Pulcini as Daruvala finished behind in fifth. Pedro Piquet crossed the line in sixth, as Jake Hughes finished in seventh, with it the fastest lap of the session.

As racing resumed on lap seven, Christian Lundgaard spun after being hit from behind by Hitech's Juri Vips as Armstrong got ready to restart the session, losing a lot of positions as he recovered from his spin. A great restart for Kari saw him take second off Shwartzman, Vips being handed a ten second penalty for his accident.

Kari managed to take the lead from Armstrong as the pair came into turn eighteen side by side, Kari passing Armstrong around the outside. Armstrong fought back through turns two and three but could not find a way around the Finnish driver.

Armstrong briefly took the lead on lap eleven, but went wide with too much speed at turn two losing positions to Kari, Shwartzman and Pulcini, as debutant David Schumacher spun after being hit from behind by Keyvan Andres. Armstrong again went wide at turn two on the following lap after locking up into the corner. Andres was awarded a five second penalty for his contact with Schumacher

Championship leader Shwartzman only needed to finish the race in second to secure his title, but went for victory as he passed Kari to retake the lead into turn two. Rival Daruvala lingered in fifth position, looking to close up the gap and deny his teammate the title, however dropped a position as Vips passed him for fifth.

Armstrong retook second from Kari as teams predicted more rain for the final few laps, but the rain stayed away as Armstrong managed a last lap pass for the lead on Shwartzman, but still allowing Shwartzman to take the title on his home circuit with his second place finish.

Eighth went to Vips after his penalty was applied, while Raoul Hyman took ninth position for Charuz. Richard Verschoor crossed the line to finish the race in tenth position.