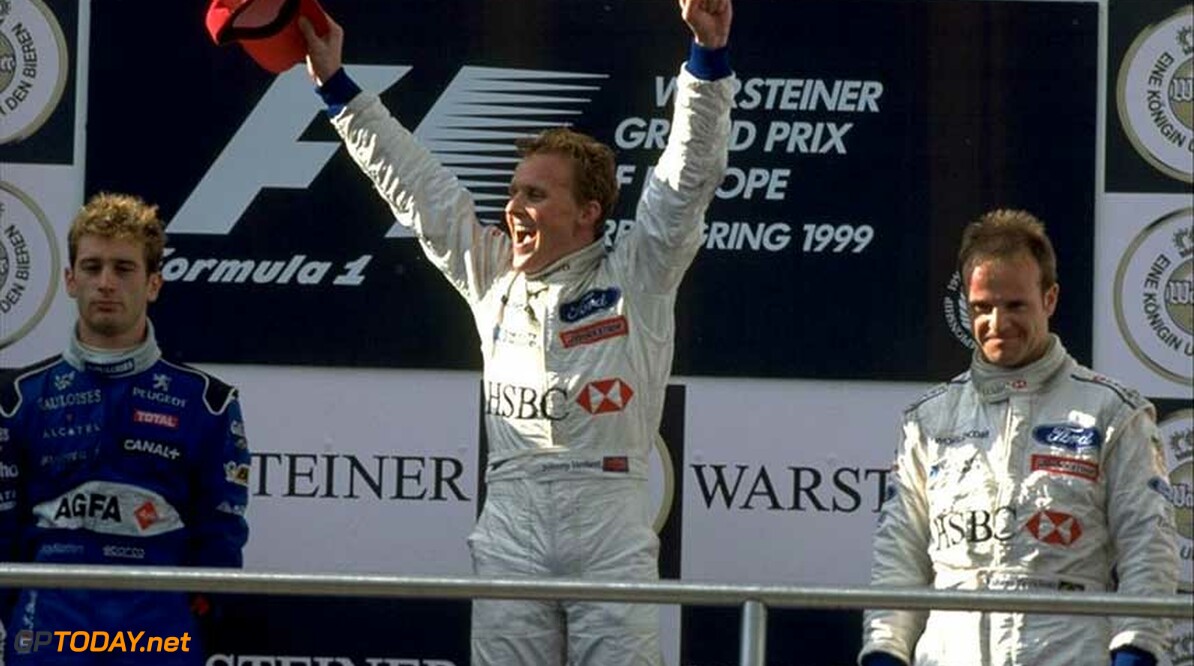 The second chance: Johnny Herbert - The crash at Brands Hatch

Johnny Herbert was the emerging talent in British racing in the eighties. Herbert was mentioned at the same level as Nigel Mansell - the same kind of humour, the same passion for motorsport and both were very fast. While Mansell scored victories in the eighties, the British media found a new talent to focus on in Herbert. Herbert had a little bit of Jim Clark and was mainly praised by 1976 champion James Hunt. Hunt was a big fan of Herbert in the junior classes and also mentioned his name several times during his reporting on the BBC Grand Prix program. Herbert won the legendary Formula Ford Festival at Brands Hatch in 1985. Eddie Jordan, team owner of Jordan Racing (the forerunner of Jordan Grand Prix), contracted the Briton and together they won the title in the British Formula 3 championship in 1987. As a promotion, Herbert was able to move on to the International Formula 3000 in 1988 championship where he had strong challengers in Roberto Moreno, Pierluigi Martini, Jean Alesi and Mark Blundell. Herbert won his first Formula 3000 race at the circuit of Jerez after starting from pole position. During the second race of the championship at Vallelunga, Herbert first met Gregor Foitek.

"In Vallelunga I had a duel with him [Foitek] for the first time," Herbert said later. "We were equal in the race and I decided to give him space because I did not feel comfortable to race with him ." Johnny was right. Foitek turned in on Herbert during a duel and the British driver crashed hard in the tyre wall. His head hit the crash barrier and Johnny sustained a serious concussion. The diagnosis made by Professor Sid Watkins was clear. In the hospital the London Hospital in Whitechapel, Herbert was told that he was not allowed to ride the next race in Pau. "That was the first time I really met Mr Foitek." Herbert explained.

The crash at Brands Hatch

Herbert qualified as fastest on Saturday in front of his teammate Martin Donnelly. Both cars of the Q8 Team Jordan were more than six-tenths of a second faster than Pierluigi Martini and Gregor Foitek. Johnny was determined to make up his points back on Roberto Moreno. Herbert, seventeen points behind the Brazilian, had set his sights on the English races of the championship, starting with Brand Hatch that weekend. Eight days later, the championship would go to Birmingham, a street circuit where Moreno had already

come second in 1987. Herbert had already tested for Lotus and a Formula 1 career was on the horizon. Herbert took the lead of the race and built his lead to twelve seconds. When Roberto Moreno, his competitor in the battle for the title, crashed in the 22nd lap at Paddock Hill, the red flag came out. Herbert knew that August 21st should be his day. He had the chance to catch up nine points. But Herbert did not start well at the restart. When Donnelly took the lead and went first to Surtees, Johnny was in third place. What followed was a chain collision of unprecedented size. Foitek turned in on Herberts right. "He had a wider line than I had," Herbert said about Foitek. "At the exit of the bend I looked into the mirror to look for him, I knew that he would be able to pass me down the hill, I saw him coming and kept somewhat right, I did not make a movement to the left myself. At that moment, he hit the back of my car, what he wanted at that time was impossible, he should have backed off and stayed close behind me, instead he put the car next to mine. He steered to the right, then I got into the wall, I remembered it was a very fast and brutal impact, my head slapped on the steering wheel and I can still remember that I was tolling over the road. I saw a big hole in front of me, everything I could see was asphalt and grass. "

A chain collision started behind Herbert. Foitek, the instigator of the accident, rolled over several times. Olivier Grouillard came into contact with the wrecks of Foitek and Herbert. The soon to be Ligier driver broke his left arm. Foitek lost his helmet during his rolls and was left unconscious. Claudio Langes, Andy Wallace, Russell Spence, David Hunt, Gary Evans and later Footwork driver Aguri Suzuki all had damage on their cars by flying debris. Mark Blundell appeared to be lucky: "Components of Johnny's wing came straight to me, I just put my head and helmet down and a part hit the roll-over-bar above my head. I was very lucky. "

James Hunt, who was then the coach of Jean Alesi, visited the crash-site and returned shaking his head. Many people could not believe what had happened out there. Many drivers pointed out Foitek as the perpetrator of the accident. Blundell was clear about this: "He was one of those guys where you always held your heart when you had a wheel-to-wheel fight, he was a stubborn guy who had absolutely no respect for the fellow drivers."

The moments after the crash

Herbert was still stuck in the car: "I remember that Aguri Suzuki came to me to see if everything was okay, and then a marshal arrived asking me if I was okay, I saw his face turn to the front of the car, and he turned away, that meant to me that it was not so much good." Adrian Reynard, the man who produced the Formula 3000 cars at the time, came to watch. Johnny's racing engineer at Jordan, Trevor Foster, was also on site.

"I was anaesthetized with heavy morphine and nitrogen dioxide, I was taken out of the car and transferred to Queen Mary's Hospital, Trevor Foster remembered everything. He said 'the surgeon came to visit us and said that Johnny's injuries were so bad that his racing career was definitely over, and that there was a real possibility that they would amputate his right feet'." Foster pointed out during treatment in the hospital that under no circumstances should this happen: "We have been very clear, also towards Johnny. Every effort must be made to resolve this operationally. The doctors did a great job during the operation. I will never forget how Johnny looked after that first operation. When I told him that he had kept his foot, it looked like a ten-year-old child. He was so happy. "

The Formula 1 debut for Benetton Ford

Herbert made his debut in Formula One in 1989 after a long rehabilitation. It was the

Benetton team that offered him a contract. During the first Grand Prix of the year in Rio de Janeiro, Herbert scored a fourth place. Points during his debut race was a dream come true but the young Brit nevertheless still had physical problems. The fact that he could not walk decently and the feeling in his legs and feet was not optimal shows that Herbert's performance during that Brazilian Grand Prix was unique.

"The problem I had was that my feet would only move up and down but they could not move sideways as they had before the accident. Before the crash I used to have the brake pedal set a long way forward of the throttle pedal so when I pushed fully of the brakes my foot would be level with the throttle and I could roll my foot across.

Herbert scored five points during the first five races, but actually lost speed after his first race. He could not qualify at the Canada Grand Prix and Benetton's team management decided to replace him. Herbert got the drive at Tyrrell at the end of the season. He qualified in sixteenth at Spa-Francorchamps where he was almost half a second faster than teammate Jonathan Palmer. Herbert's last race of the season took place in Portugal, but he could not qualify on the Estoril circuit

as he was two-hundredths too short to be faster than Eddie Cheever in pre-qualifying. Herbert decided to drive in Japan in 1990 and 1991 signing a contract with Mazda for the 24 hours of Le Mans. In 1991 he won the legendary race in a team with Volker Weidler and Bertrand Gachot. It was the first victory for Mazda at the 24 Hours of Le Mans and it broke the years of dominance of Jaguar and Tom Walkinshaw Racing.

Lotus and transfer to Benetton

As a teammate of Mika Hakkinen, Herbert was respectively able to keep up with the talented Finn. In 1993 and 1994 Herbert had excellent years with the ailing team. In 1993 he seemed on his way to a podium at Interlagos, however Michael Schumacher passed him in the last lap. Schumacher would then become his teammate at Benetton at the end of 1994. Herbert was given preference over Jos Verstappen after the European Grand Prix at Jerez. In 1995 he bagged four podium finishes with Benetton, including two victories. During his home race at Silverstone, Herbert gained from the accident between Schumacher and Hill to win the race. Herbert did it again during the Italian Grand Prix at Monza. In the 1995 season Benetton became world champion by the manufacturers and Herbert had a large part in this. With 45 points he finished fourth in the championship. Yet Herbert had to make way for Ferrari drivers Berger and Alesi at the end of 1995. He signed with Sauber, where he scored a podium in Hungary in 1997. The biggest victory had to come then. During a bizarre and unreal race at the European Grand Prix at the Nürburgring, Johnny Herbert won the race in his Stewart Ford despite starting from 14th. That victory on 26th September 1999 was the last F1 victory that Johnny Herbert scored in his career.

Yet you could argue that his greatest win came a little more than ten years earlier. Herbert had returned from a hopeless position, without a working right foot, back to the goal he always had: becoming a Formula 1 driver.