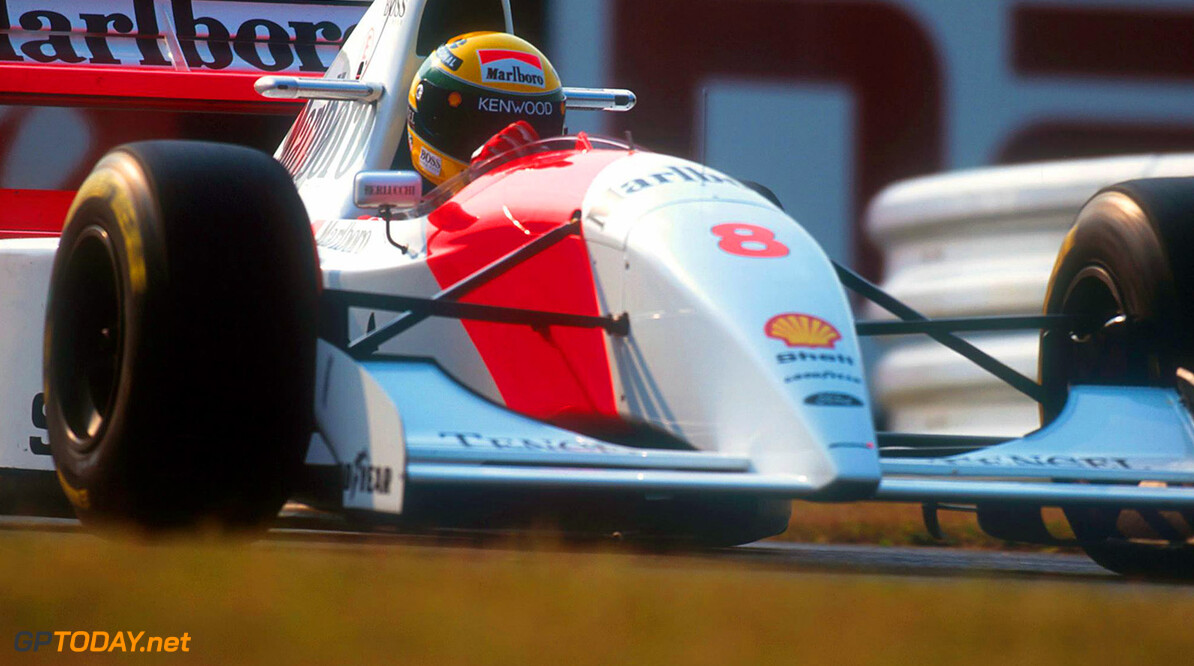 History: The story of Berger and Senna

Pranks on the workfloor. For some of us the humour inflicted upon others from behind our desks will remain absent, because it's simply not going to happen. People who are working very, very serious jobs for example, like helpdesk employees or people who work in libraries. They honestly haven’t got a single clue when you're pulling a more than decent prank on them. However, for some of us, humour is a very welcoming addition to what should usually be a very serious job. For instance, an undertaker is without doubt the authority when it comes to jokes and pranks specified to his job sector. Even bus drivers can surprise you with some cracking jokes. A few weeks ago I was headed from Utrecht to Paris by bus when the driver talked me through the best gas stations in the Rome outer-area where to find some good male company. Right.

It's not any different in the Formula One paddock, when it comes to pranks that is. Practical jokes happen every day and to be fairly honest, the brilliant minds that keep Formula One the absolute pinnacle of motor engineering are just grown up kids who get to play with big and expensive toys.

The Formula One paddock has seen a lot of trolls and pranksters come and go throughout her rich history, which can be found in the darkest places of the internet. Honourable mentions go to Vitantonio Liuzzi, who nicked Scott Speed's talisman Barbara the Sheep and 'accidentally' cut off her head when returning it to the American who, at this point, was completely freaking out. Luckily for Speed, Liuzzi presented him with the original Barbara after he had his laughs. April fools-jokes are definitely the highlight of the season. Numerous jokes have been executed by the teams. Eddie Jordan had to run from the Brazilian press in 2001 when he confirmed the moving of Jordan's HQ from Silverstone to Eddie's hometown of Dublin, Ireland. All of that on the same day Ferrari announced the immediate retirement of Rubens Barrichello; introducing MotoGP driver Max Biaggi as his replacement. James Allison, working at Lotus, introduced a left-handed steering wheel for Kimi Räikkönen in 2012 while Red Bull, in 2014, introduced a steering wheel that had Twitter fully integrated in the interface so that drivers could tweet while driving.

If we are to make up a list of the best pranks that enlightened Formula 1, well, that would take some time. So the best thing to do for us is to pick out a few of the gems. We don't have to look very far for that. Presenting the funniest guys in the paddock, the Laurel & Hardy, Tom and Jerry, Sylvester and Tweety of the Formula 1: Gerhard Berger and Ayrton Senna. I am very much aware of the fact that any duo containing Senna does not immediately suggest humour is involved. But trust me, there is. Above all, it makes the story of these two legends even more brilliant and it adds to the myth that was Ayrton Senna.

Berger and Senna were colleagues at the Mclaren F1 team in the seasons of '90, '91, '92. Their ego's battled it out on the track and also outside the speed domes.

Hotel managers had their reasons to cringe a bit when welcoming Berger and Senna to their respected and classy establishments. The hotel was the ideal playground for Berger's pranks. A dinner party was held by Mclaren during the Grand prix of Australia in 1990 when, at some random moment, guests were starting to push each other in the pool. Senna did not feel like it and fled to his hotel room after throwing half a glass of water at Berger. Challenge accepted for Berger. With a bit of help he managed to create an extension for a fire extinguisher and pointed it underneath the door of Senna's room. At 3 AM in the morning, under the watchful eyes of a few friends, Berger opened the valve and with a huge blast Senna flew out of his hotel room window. The room was completely wrecked. Berger remembers: "It looked like a bomb had exploded inside the room. The confusion woke many people up, who started to scream at Senna for making so much noise. He was terribly embarrassed."

Whilst staying in a hotel in Port Douglas, Australia, Berger released a considerable amount of live creatures in Senna's room, putting it in-between his bed sheets, pillows and clothes. An infuriated Senna spent the rest of the night catching frogs. During breakfast, Senna spoke up to Berger who then replied by asking 'did you find the snake?'. Senna slept very little those nights even though he took revenge on Berger by putting a smelly piece of French chees in his air duct.

And thou also, Ron Dennis?

The aforementioned developments in the Mclaren teambuilding were closely followed by team manager Ron Dennis. Dennis is known as an efficient business man with little room for infantile escapades. However, we couldn't be further away from the truth. Even Dennis was merciless, when it comes to pranks that is. Dennis tells us in an interview that he once entered his room in a very fancy Italian establishment during the Grand Prix of Monza where every single inch of the wall was covered with pornographic material. He had to get rid of this without drawing attention. Luckily for him, Philip Morris (yes, the Marlboro man and always in for a party) organized a dinner party and invited an escapologist. The illusionist put on a harness and jumped in the pool. He didn't succeed and got taken away to the hospital. The perfect opportunity for Dennis to withdraw from the party and get rid of the posters. The escapologist was fine and returned after being checked at the hospital. Dennis got intel on who plastered his walls and made sure that his room (no names were mentioned in the interview) was completely emptied. From chairs to clothes, everything.

*There is a story circulating the internet that Senna emptied Berger’s room like this once which caused Berger to enter the paddock in his underwear. According to the sources this happened in Hungary ’91, not in Italy.

Their story of pranks doesn't stop there. So much more happened between them in the early 90's. The story about Senna's briefcase is an absolute classic. Senna's new briefcase was made out of high-tech carbon composites and, according to Senna, virtually unbreakable. Berger was keen on putting this assumption to the test and threw it out of a helicopter when they were in transit around the Monza circuit. Sadly, only Berger got to see Senna’s face of utter disbelief. The guys were keen on ruining each other's shoes as well. It was Senna who filled Berger's shoes with shaving foam while on their way to a fancy dinner. Berger had to show up with his sneakers under his suit. It is told that Berger took revenge by buttering all of Senna’s shoes, making him show up late for a dinner with F1 doctor Sid Watkins and his family. I have no certainty whether the sequence of these events are correct.

We close this story of pranks with one of Berger's most daring jokes. Berger was able to get his hands on Senna's passport and managed to cover Senna's picture with what Ron Dennis called 'an equivalent-sized piece of male genitalia'. Usually Senna got a clear run through customs at pretty much every airport he got to. After all, he was Ayrton Senna. Accept when arriving at an airfield in Argentina where customs checked his passport, resulting in a 24-hour detention for Senna. Berger must have laughed his bridges off. Senna took revenge by gluing all of Berger's credit cards together. Other sources suggest he nailed them together, others say he bolted them together. Whatever the truth, it was funny as hell.

Adult children, was what they were. Only if Gerhard Berger wrote a book about his time as Senna's colleague, the world would be a better place. Until that moment arrives we are left to work with the stories circulating the internet and which are spread from ear to ear, removing any guarantee that any of these stories are told correctly today. But the important thing about them working together is the brilliantness that was Berger's appointment to the team. He was able to handle Senna’s fire. He was able to disarm the fire driven Senna who only just closed off one of the most competitive era's in Formula One history, the one between him and Alain Prost. For the first time in his career, Senna was able to smile and enjoy the circus outside the car, freed from his Spartan childhood. On the grid of San Marino, 1994, Senna couldn't resist a smile when the tifosi roared with twice the volume when Berger was announced. Berger was now driving for Ferrari. It amused Senna, from ear to ear.